The Second Book of Ordinances, 1513

The Second Book of Ordinances, 1513

An illuminated detail from a lapidary contained in the Company’s second book of ordinances, 1513, showing Evax, ‘King of Arabye’, presenting the lapidary to the Emperor Tiberius. 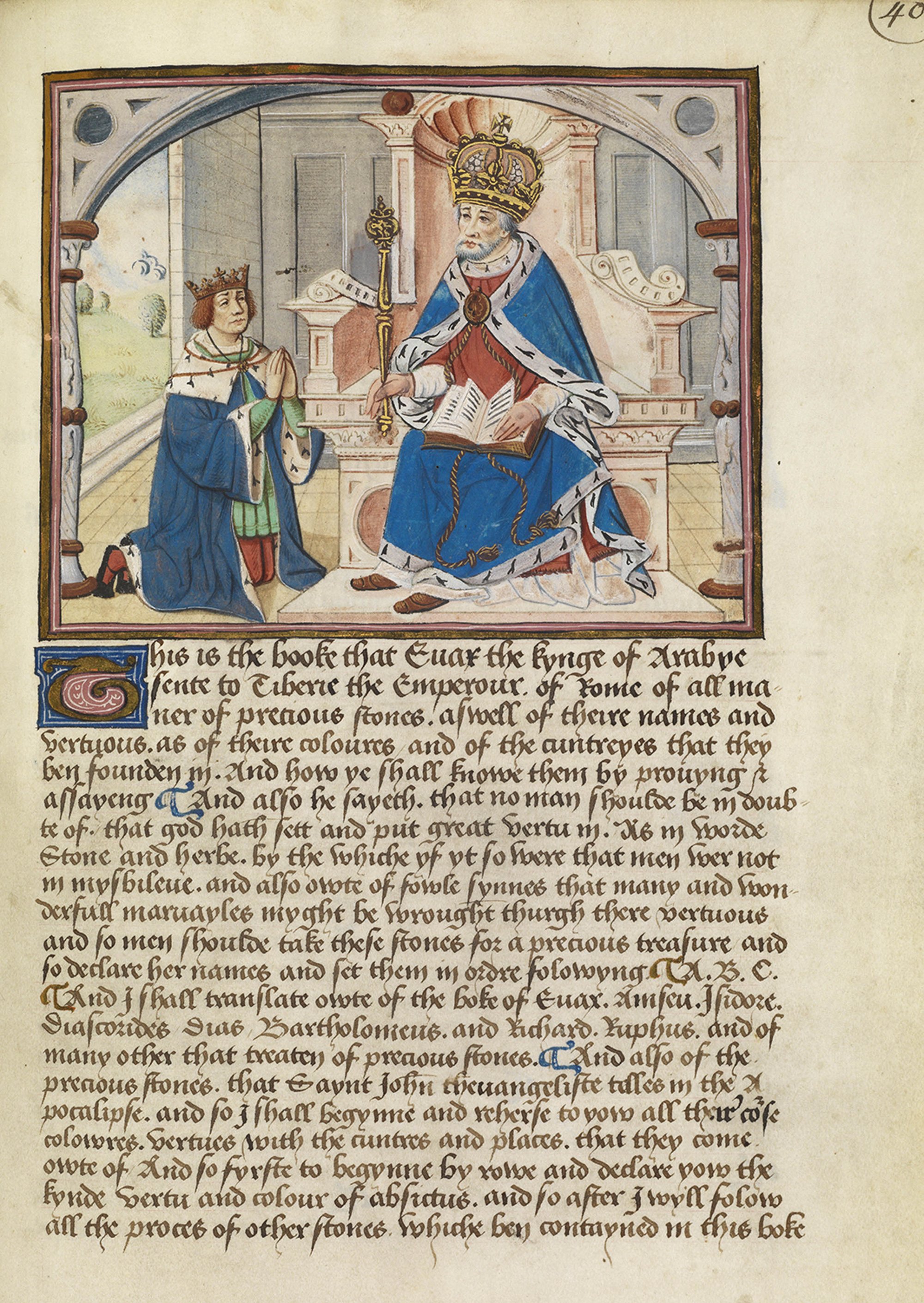 The Goldsmiths’ Company owns two beautiful illuminated books of ordinances which were the rules and regulations by which the Company was governed. These ordinances were written down so that they could be read out on ‘quarter days’ when the whole company was assembled and goldsmiths could not therefore claim ignorance of any of these bye-laws. Attendance at these meetings was obligatory, and fines were levied for those members who were absent without good cause. In fact fines for absence were a very good source of income for the Company. Those were the good old days!

The earlier of the two books was begun in 1478 following the decision of King Edward IV, to allow owners of gold and silver wares bearing his mark, the leopard’s head, to sue the Goldsmiths’ Company if, subsequently, the metal content of those wares proved substandard. Major changes took place within the Company with the appointment of a Touch Warden and a Common Assayer. This book contains numerous rules regarding the elections and duties of officers; apprentices; shop keeping; working in gold and silver; and other matters which open a window to the trials and tribulations which beset members of the Company at this period. Its contents are recorded in the appendix of the fascinating early history of the Goldsmiths’ Company by T.F. Reddaway and L.E.M. Walker.

The focus of this article, however, is the second book of ordinances, parts of which date from 1513 - half a millennium ago. Besides the updating of the rules and regulations which, by now, had to receive the approval of officers of the King, the main interest of this particular book lies in the Company’s charter; a shield bearing the Company’s arms; and a lapidary; all of which are contained therein. 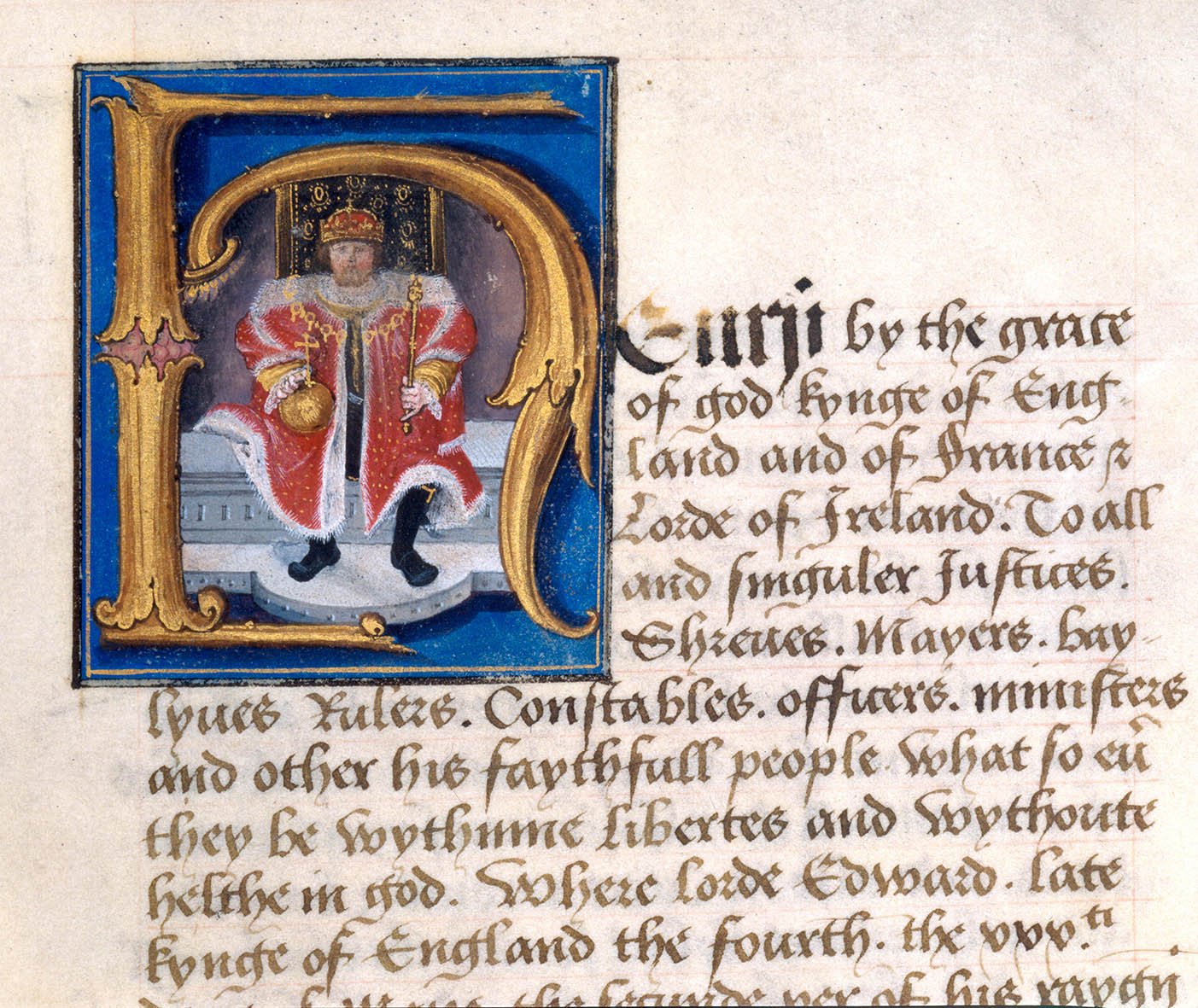 The charter begins with an illuminated capital (H) within which is seated a full length figure of Henry VIII. It is tempting to link the payment of 20 shillings to an unnamed ‘limner’ in 1510 with this figure but there are distinct holes in the evidence. This particular payment was related to the ‘Confirmation’, a case for which cost 2 shillings, and the ‘liming thereof’ the 20 shillings previously quoted.

One can deduce that the somewhat enigmatic term ‘confirmation’ was related to the charter because, at an assembly held on 12 October 1510, it was agreed that the Mayor should be allowed to see the confirmation of the Company’s charter. However was this charter a more elaborate one and one which, in addition, had a beautiful case?  Certainly the copy of the charter in this book is not as magnificent as other early charters held by some of the other livery companies and possibly would not warrant a case to hold it. Further research is required on the portrait of Henry VIII. He does look rather portly and, if the illumination was painted circa 1510, is that an authentic image of the young King?

The second significant element in the book is the shield of the Company’s coat of arms. It is illustrated in colour and is thought to date from c.1510. As such it is the earliest version of the arms in the Company’s records. It is not the full grant of arms, which was awarded in 1571 and which did include crest, supporters and motto. One of the resonant phrases in the 1571 grant referred to the arms ‘borne time out of mind’ and this present version, and earlier ones of the shield from the 14thcentury, would bear out this statement.

At the back of the second book is the lapidary, an everyman’s guide to the history, properties and characteristics of gems and an essential textbook for the mediaeval jeweller wishing to impress potential customers. The understanding of the natural world was less scientific in those days and it was believed, for example, that some stones could be sown like seeds and would reproduce themselves as wheat or corn might do. The book has attractively illuminated capitals but the main focus of interest is an illumination of Evax, the ‘King of Arabye’ who is depicted presenting the lapidary to the Emperor Tiberius. Images of these illuminations have been sent to a researcher at the University of York and it is hoped, in time, that it might be possible to identify the hand of the illuminator, and, perhaps, that of the scribe as well.

Five hundred years on, books such as these are still a source of wonderment. Within the covers of this particular volume there is still much to discover about its genesis and significance to the Company. The careful bibliographical study of its contents and its composition may reveal these secrets.

The Company’s archives date back to the 14th century, and the Library's collections include over 8,000 books and over 15,000 images, magazines, journals, films and special research collections.

The Worshipful Company of Goldsmiths, more commonly known as the Goldsmiths' Company, is one of the Twelve Great Livery Companies of the City of London and received its first royal charter in 1327.