A scroll salt. In the centre of each panel, figures of the archangel Michael and groups representing Abraham’s sacrifice placed alternatively. The design of the four eagles is taken from the ampulla which forms part of the Royal Regalia. This salt is described in Pepys' Diary dated 27th April, 1662 as seen by him at the Mayor’s house in Portsmouth where it was on view prior to presentation to the Queen. It was prepared as a gift by the Corporation of Portsmouth, to Catherine of Braganza on her arrival in England for her marriage to Charles II by proxy at the cathedral there.

“Visited the Mayor Mr.Timbrell, our anchor smith who showed us the present they have for the Queen which is a salt cellar of silver, the walls christall with four eagles and four grey hounds standing up at the top to bear the dish, which indeed is one of the neatest pieces of plate that I ever saw, and the case is very pretty also”. 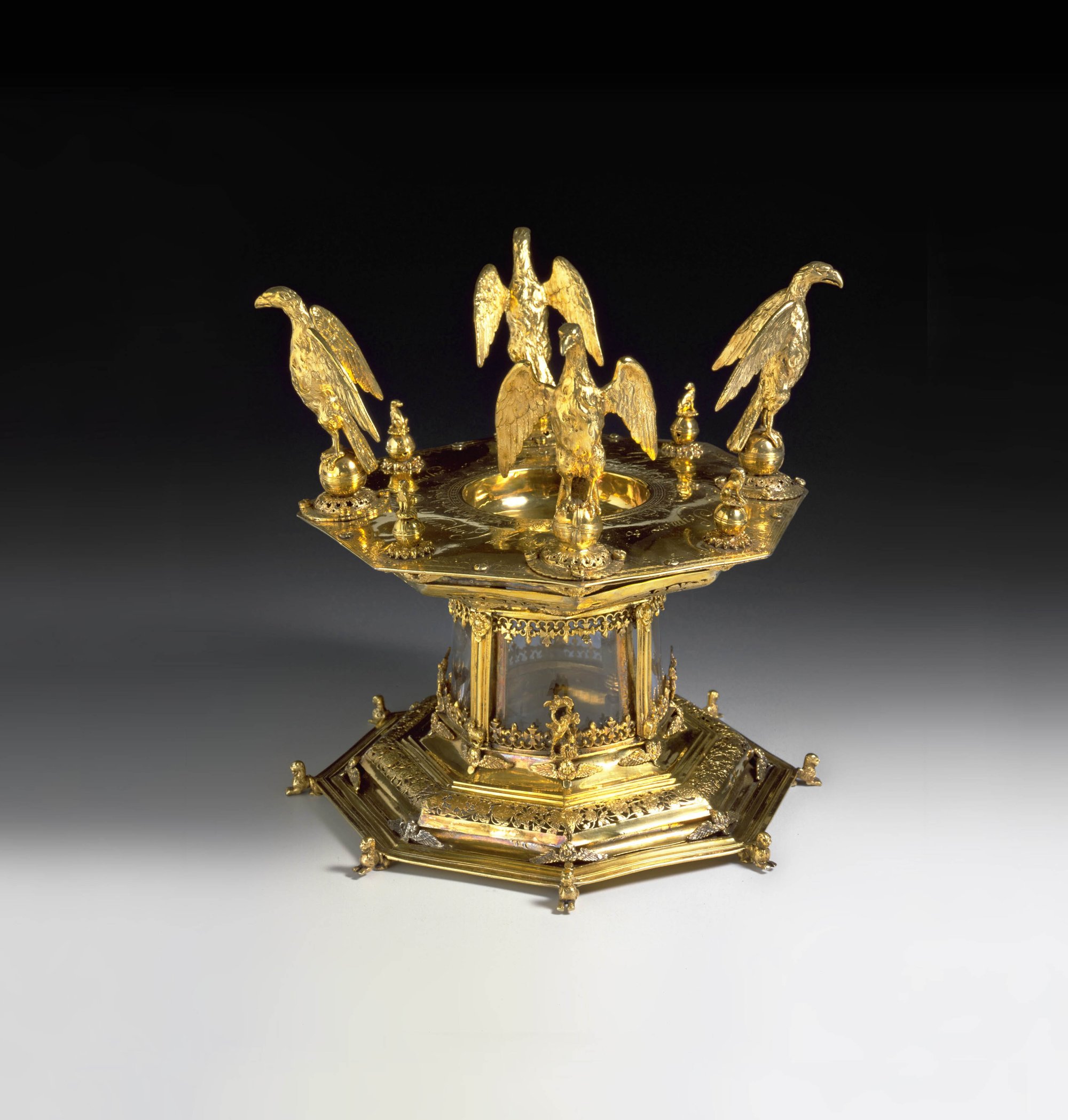 Catherine was unpopular as a Queen first as she was Roman Catholic but her loyalty to Charles II despite his infidelity, changed public perception of her. After Charles’ death in 1685, Catherine remained in England, living in Somerset House through to the reign of William and Mary. Then her position deteriorated, her religion isolating her. A Bill was introduced to limit the number of Catherine’s Catholic servants. She was warned not to agitate against the Government. One concludes she was short of money, hence the sale of the salt, probably directly to Thomas Seymour whose business was in Lombard Street.

Queen Catherine set out on her return journey to Portugal on March 30th 1692. The Court Minutes dated 17th May 1693 state ‘ordered by this Court that Mr Thomas Seymour shall be excused from the personal service of Touch Warden for the year ensuring and all other offices unless he please to hold the same upon his presenting the Company with a large silver gilt salt with a christall body of a considerable value according this his voluntary proposal.’

Thomas Seymour died 5 years after donating this salt to the Company on May 29th 1698. He is buried in St Mary Woolnoth Church, in the City of London.

Inscribed: “The gift of Thomas Seymour to the worpll. Company of Goldsmiths 1693.”