The Trial of the Pyx

The Trial of the Pyx is one of the central ways in which we contribute toward national life by ensuring coins produced by the Royal Mint are up to standard. It represents not just history, but the here and now - for as long as people carry cash in their pockets, the Trial of the Pyx will continue, as it has for the last eight centuries.

History of the Trial of the Pyx

The Trial of the Pyx dates back to the 12th century, making it one of the oldest judicial procedures in the country and has taken place at Goldsmiths' Hall since 1871.

The name Pyx refers to chests in which the coins are transported, and derives from the Latin word ‘pyxis’, meaning small box. For centuries they were stored in the Pyx Chamber in Westminster Abbey, along with other important items of state and church. 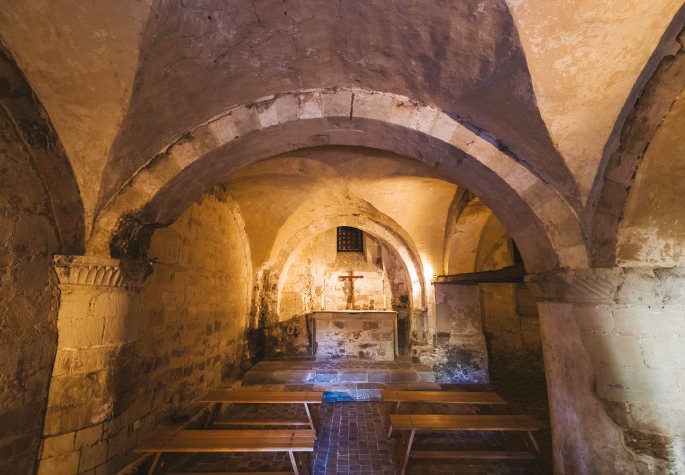 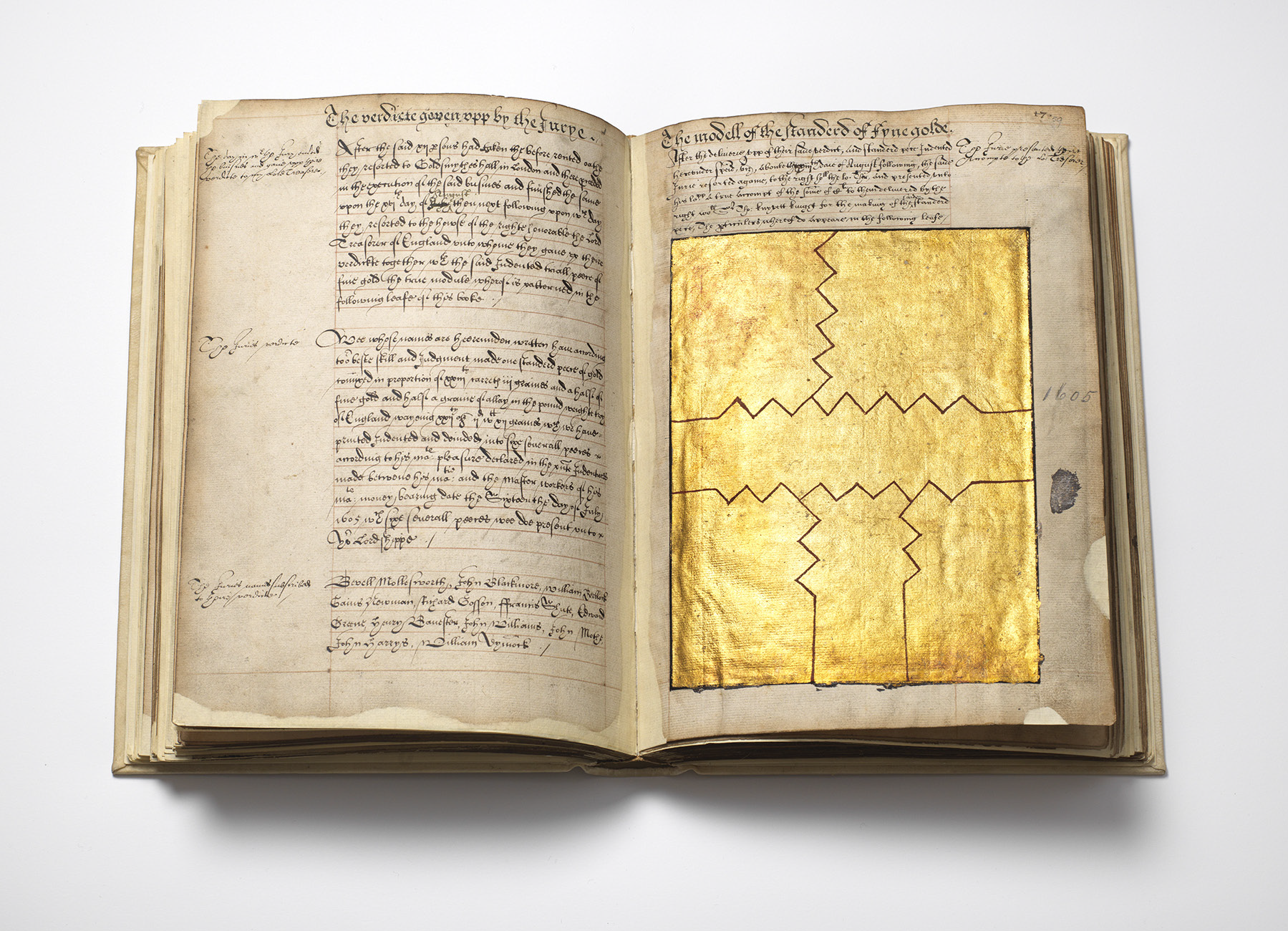 Model of the standard of fine gold, 1605 Trial of the Pyx, from the Goldsmiths’ Company’s Archive

The first record of a public trial dates from 1248 when twelve citizens of London and twelve goldsmiths of the City were selected to examine the money.

Up until the reign of Elizabeth I the juries of the trial were composed of a mixture of goldsmiths and other citizens of the City of London. Elizabeth gave the Company entire responsibility for the trial in 1580, and all jurors were nominated from its members from then on.

The 1870 Coinage Act, established Goldsmiths' Hall as the new venue for the Trial. This made good sense as The Goldsmiths' Company Assay Office was also located in the Hall, as it is today. It is the Assay Office which has the task of testing the metallic composition of the coins. 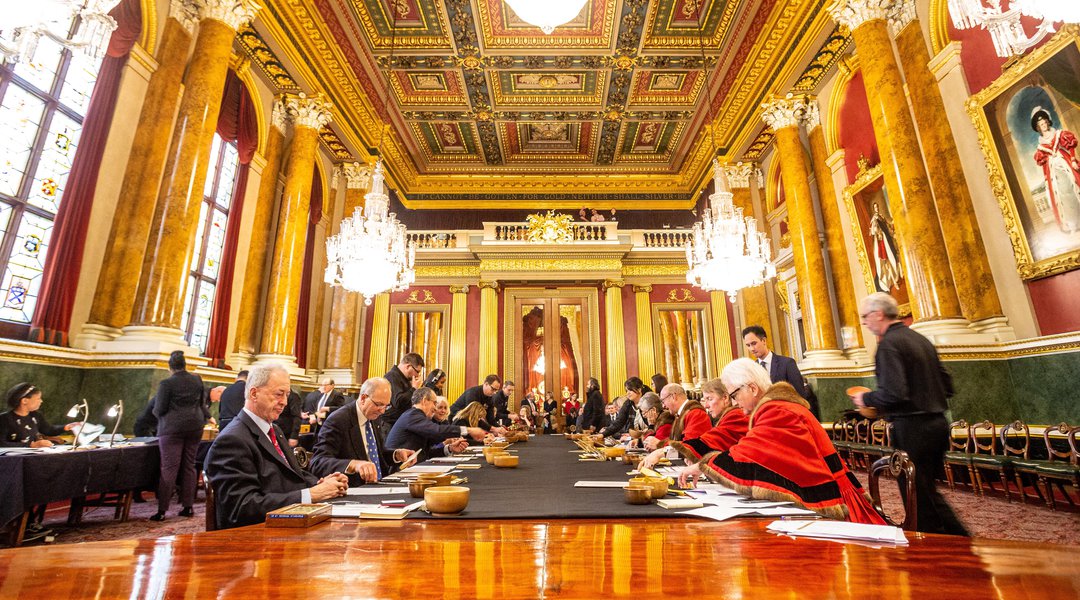 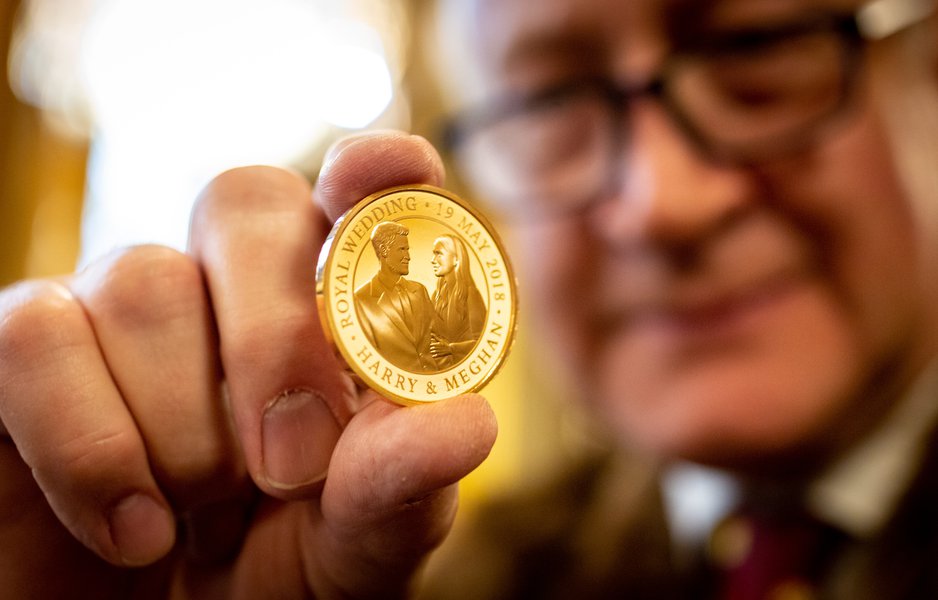 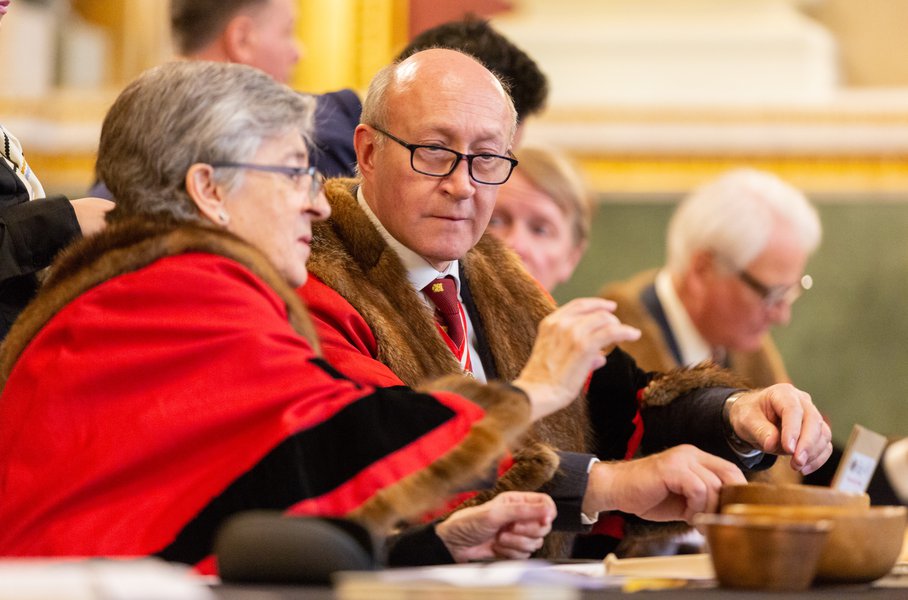 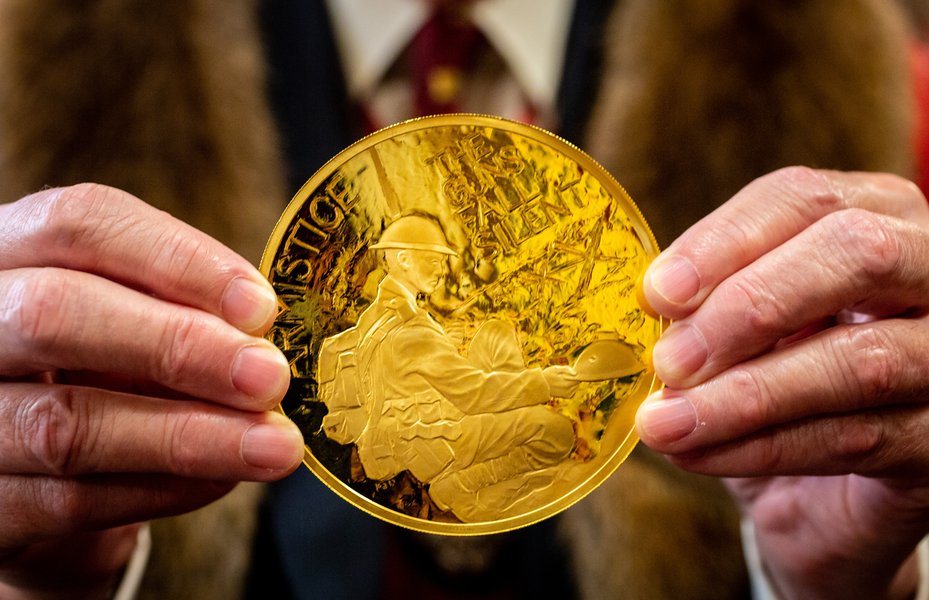 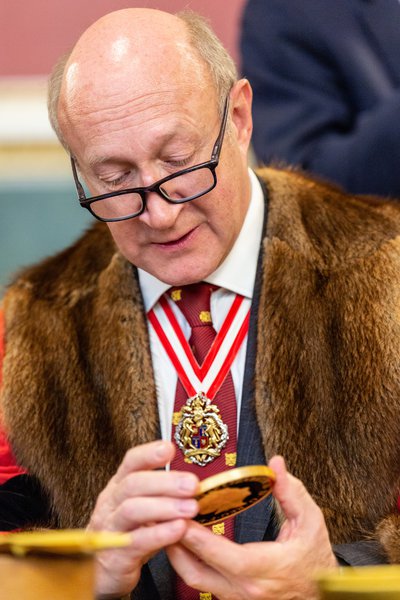 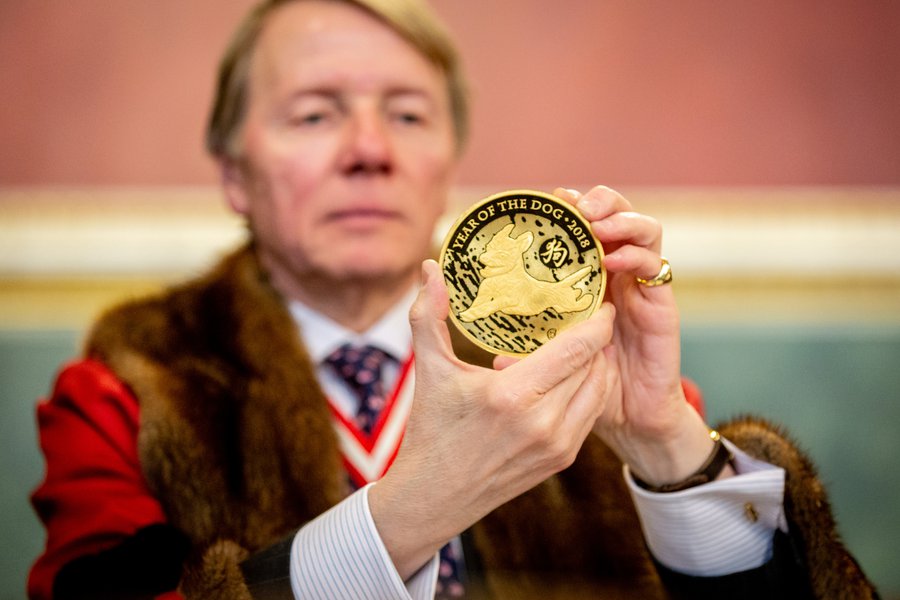 The Trial is held annually at Goldsmiths’ Hall in accordance with the Coinage Act of 1971, and is presided over by the Queen’s Remembrancer of the Royal Courts of Justice, the oldest judicial office in the UK, dating back to the twelfth century.

Little has changed in the procedure since the reign of Edward I. Throughout the year, coins are randomly selected from every batch of each denomination struck, sealed in bags containing 50 coins each, and locked away in the Pyx boxes for testing at the Trial.

“Each year the Goldsmiths’ Company is asked to conduct the Trial of the Pyx because of our centuries old tradition of competence, trust and the quality of our testing."
Dr Robert Organ, Deputy Warden

Officials from The Royal Mint bring chests (pyx) to Goldsmiths' Hall, containing coins put aside in the course of manufacture during the previous year. These coins, normally more than 50,000 in total, represent one coin from every batch of each denomination minted.

The trial jury, comprising members of the Goldsmiths' Company, is a formal court of law. It is summoned to the Hall by the senior judge in the Royal Courts of Justice, known as the Queen's Remembrancer. During the opening proceedings the coins are counted and weighed, and a selection put aside for testing by the Assay Office.  The Company has two months to test the coins.

The purpose of the annual trial is to check that UK coins produced at The Royal Mint are within the statutory limits for metallic composition, weight and size.

The benchmark against which the coins are tested is called a Trial plate. These metal plates, made of gold, silver, platinum, nickel and zinc, are held at the National Measurement and Regulation Office along with the original coin Standard Weights against which the weight of the trial coins are compared. The oldest surviving Trial plate, from 1477, is one of the treasures of The Royal Mint Museum. 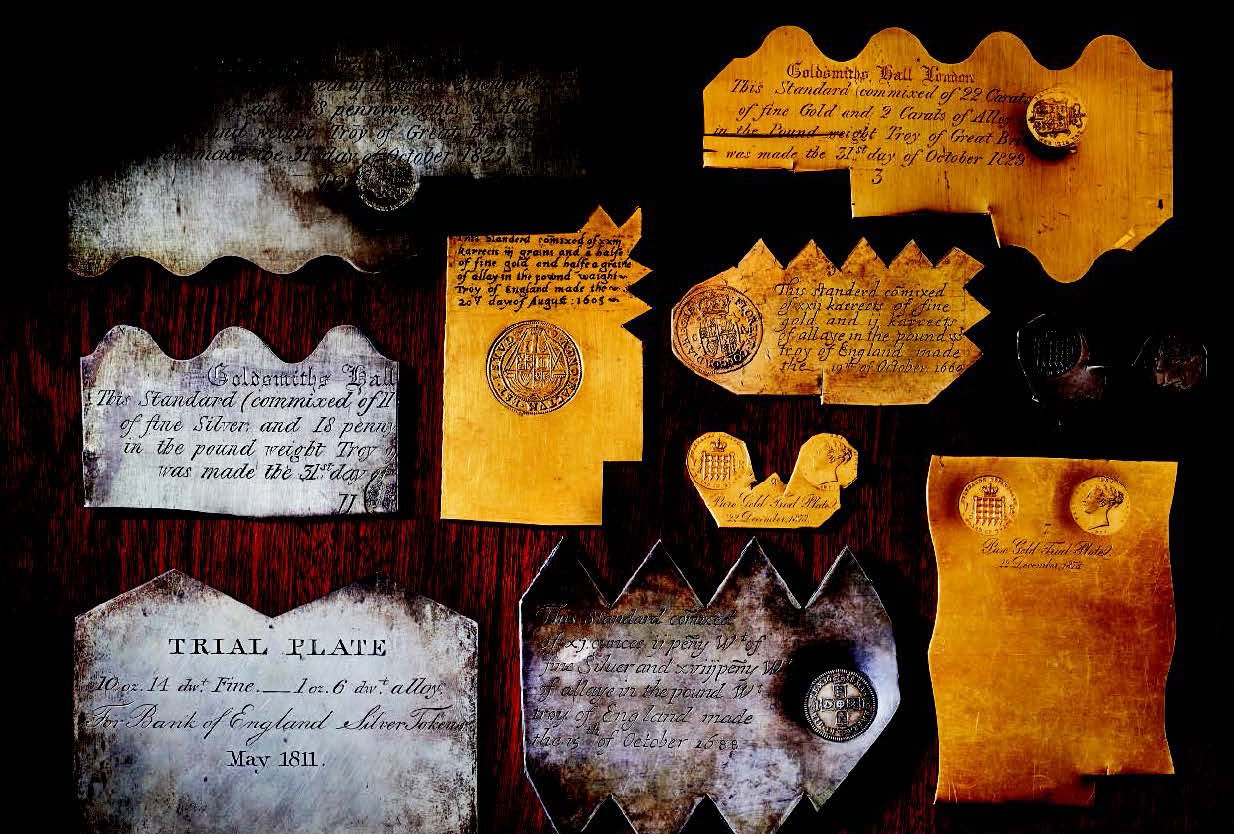 Trial plates through the centuries

"In recent years there has been an increase in the complexity of the testing required because the Royal Mint is producing a broader range of commemorative coins, including platinum coins and very large gold coins. This trend is set to continue as less circulation coins are in daily use. We continue to have a close relationship with the Royal Mint beyond coins and hallmark a variety of other products for them. This is possible because they mirror our shared values of excellence and integrity, and we will continue to stand for these values for centuries to come.”
Dr Robert Organ, Deputy Warden

Besides the annual Trial of the Pyx, rigorous quality tests are continually carried out during coin production to ensure that all coins produced at The Royal Mint conform to their correct specifications.

The coins are rigorously assessed to ensure they meet the exact specifications set out in the Coinage Act or by Royal Proclamation, a process that takes up to three months. When the examination is complete, and the Goldsmiths' Company Assay Office has established whether The Royal Mint has met its requirements, the court reconvenes at Goldsmiths’ Hall once more. The verdict is in.

The master of the Mint – a role held by the Chancellor today – went to prison for six weeks in 1318 after poor tests.

The Senior Master and Queen’s Remembrancer instructs the Clerk of the Goldsmiths’ Company to deliver the verdict to the gathered officials and audience, including the Chancellor of the Exchequer or their deputy and the Deputy Master of The Royal Mint. 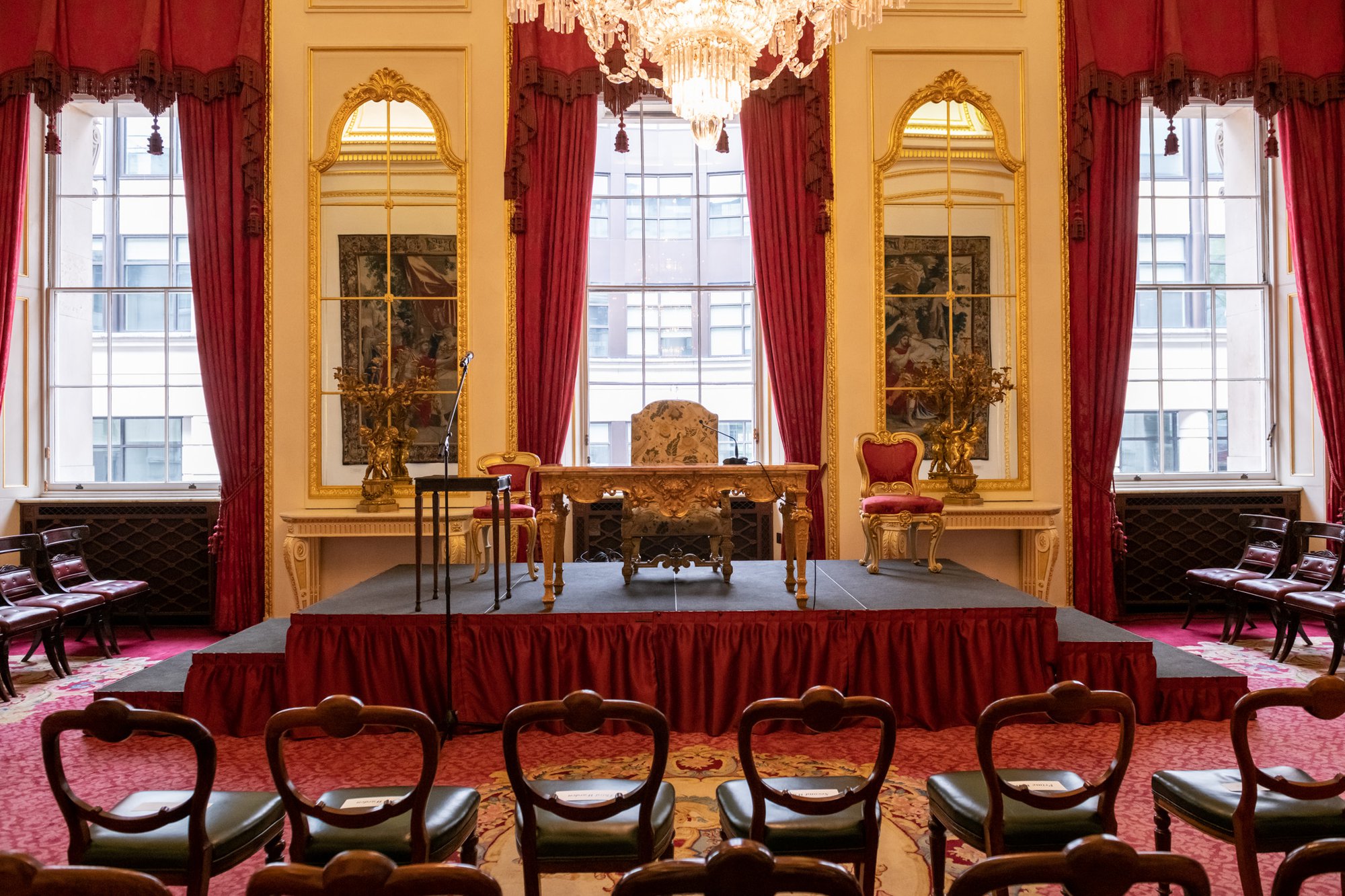 The Drawing Room at Goldsmiths' Hall where the verdict is delivered becomes a formal court of law.

The Goldsmiths’ Company Assay Office is where hallmarking began, and we have been testing and hallmarking precious metals for over 700 years.