A woman’s identity in jewellery and art: Part two

In this three-part series for International Women's Day, Jeweller Ella Fearon-Low spoke with three inspirational women using the intersection between jewellery and art as a way to access female creative identity. This is part two, featuring artist-jeweller Donna Brennan.

When I think of Donna Brennan’s work I think of translucent faceted gems as they emerge seamlessly – almost creature like – from her stunning photographic images at Collect Open 2018 (new ambitious craft installations by individual artists and collectives) in her ‘Hortus Conclusus’. I knew Donna then and was already sold on her natural gift for the art of the ring – seen in both her quirky encrusted crystal and gold rings from her solo show ‘The Standard Cut’ as well as her sumptuous cocktail rings of recent years. Her work has an energy that is difficult to capture or replicate – it is genuinely alive.

I first met Donna when I signed up for a Contemporary Jewellery evening class at Morley College (anyone see a theme emerging?). Donna trained in Australia, Germany and at the Royal College of Art and has such a wide-angle lens on the world of jewellery; she opened up many new landscapes for me. Every week before we tackled materials, she would plunge us into darkness and show us slides of work by international art jewellers making in the broadest possible palette of materials. She would talk confidently of the connections between their work and inspire us to make jewellery with no boundaries. She also introduced a plethora of new materials to me – balsa, paint, silicone and shrinking rubber amongst others. I still enjoy working very purposefully in mixed precious and non-precious materials. 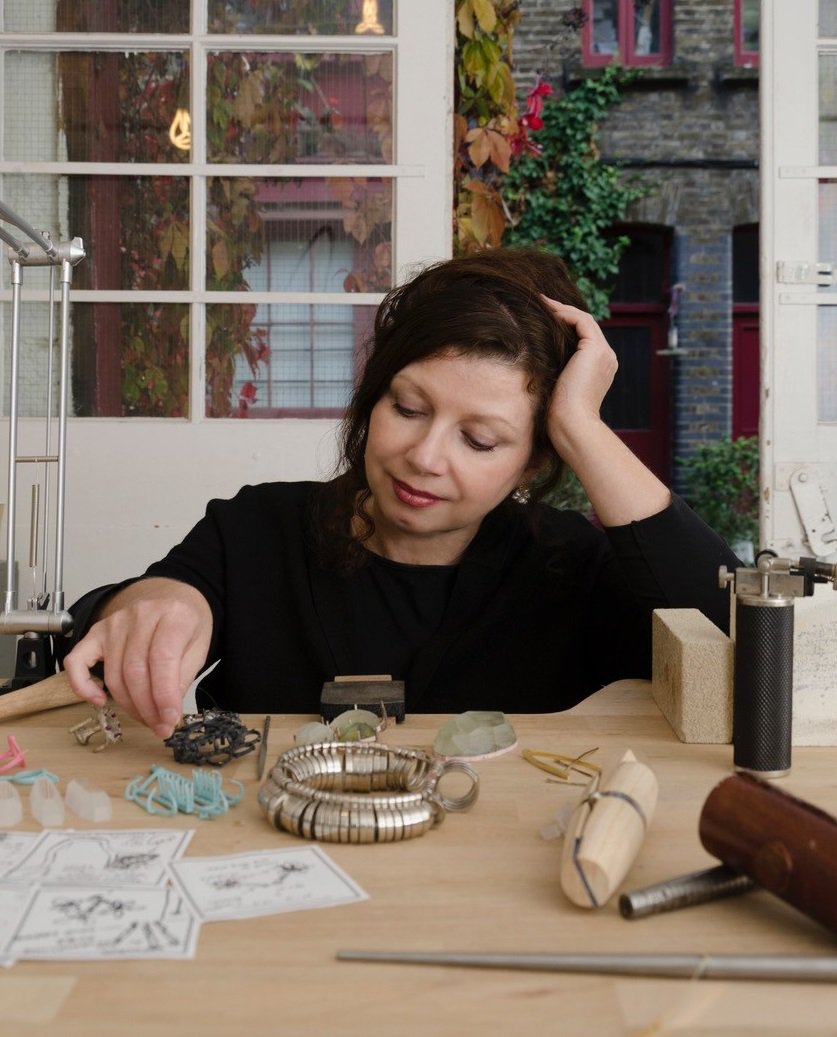 Donna in her studio by Hernan Huergo

Before I put my first question to Donna she tells me that, “jewellery has been my weapon against the virus,” as she appears, wearing one of her fabulous brooches. This is something all of us makers have had to lean on in many ways. I dive in and ask her about her practice and the lines between art and jewellery: “I would describe it as border-crossing, so it reflects my, kind of, multi-faceted training and having lived in a number of countries – I don’t draw from one base. With the art world the way it stands, artists are meant to define something. You think of an artist, you think of their work, and that's all defining. Whereas my work is constantly evolving, and I find that as soon as I've done something, it's like I've said everything that I wanted to. It may take a number of years, it may span just one project, but I don't define myself by one style, one technique, one idea.” This reminds me of a lecture I attended at St Martins’ with renowned Spanish art jeweller Ramon Puig Cayas, who said much the same of his process. When it is done it is done, and he doesn’t look back. I admire this fearless approach in Donna’s work.

“The work we make, whether we like it or not, acts as our autobiography, circling our career.”

Reflected in this context is the way her work manages to communicate energy so well. It’s something that almost nobody else can get into their pieces – it’s almost alive, changing, difficult to pin down. “That’s good to hear,” she says, “I think I struggle with that because the art world, and my perception of it, is that everyone's always looking for one defining moment, one defining style and they want that narrative to continue throughout their career. My process just doesn’t fit this mould.”

I ask her how she views the relationship between art and jewellery, to which she responds: “Let’s face it, the world has gone crazy and jewellery acts as a grounding force for me. I don’t do it for other people, instead it reinforces connections with yourself.” This also helps inform her thoughts on the interplay between art and jewellery – they’re of the moment things that have a grounding effect. She reminds me that the great renaissance artists were also trained goldsmiths and sometimes there’s no delineation between the two. She speaks as if emboldened by an adventurer’s spirit – it’s also present in her work and it never fails to excite me. 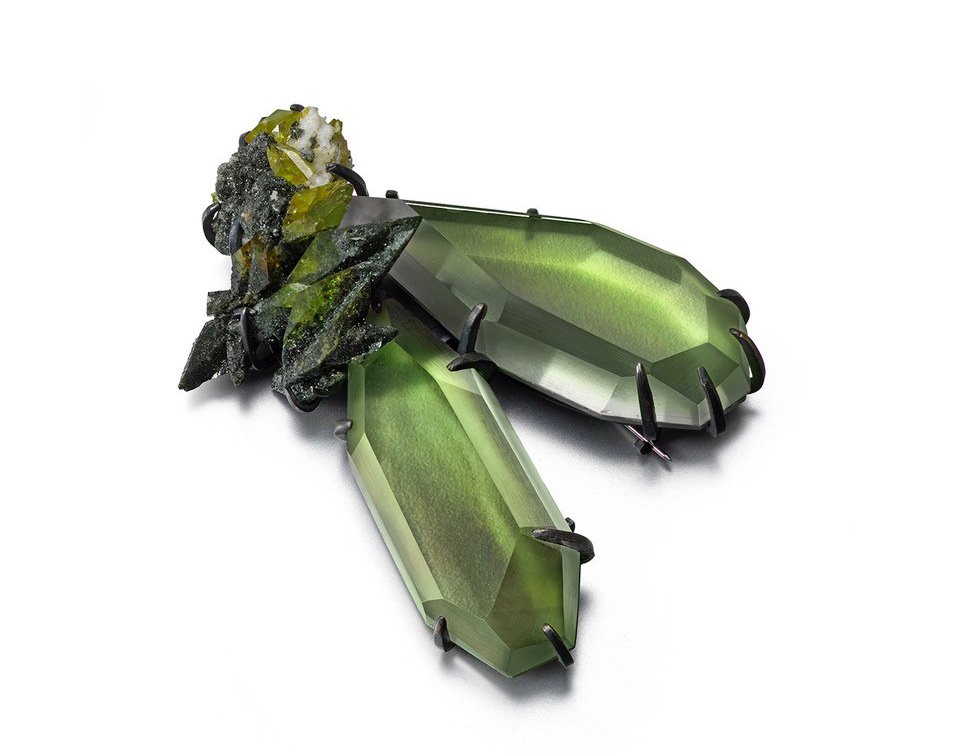 Moving from Australia, she originally undertook postgraduate training in Germany and appreciates it as a culturally very rich country that is one of the leaders for art jewellery and commercial jewellery. When speaking about leaving her home country, she says: “Fundamentally, I didn't really know where I was going. To say that it was a culture shock, on my own, pre-internet, pre-free phone calls. I literally just landed with my suitcase and my trusty little toolbox and had to make a life for myself. But, you know, it wasn't all plain sailing. It wasn't for the faint-hearted, let's put it that way. I really had to dig deep.”

Shaped by these experiences she describes imagery as an important part of her work and that actually most of the time it is rather abstracted. “I quite like ambiguity, which probably comes from my multitude of experiences of not being able to ever define anything as definitive, everything is, maybe, a blur to me. You know, I've just, kind of, moved through life, absorbing all these things and yet at the same time I always surprise myself at what comes out.” Listening to her I can’t help think she is an inspiration for any person starting out in jewellery as Donna exemplifies the meaning of trusting the creative process – whatever that might be.

“I think that's a real vote of confidence of how far we've come that women are now buying for themselves. But, I'd like to see more women really going for self-expression and not just lots of mass produced jewellery."

I ask her about what drives her choices of materials and how that informs her work. She returns to a common concept-based thread, which is based on technique: “I work in tandem with the idea and the material and they do a dance, they tango. And so, I'll make one move and then I look at the work and it's speaking back to me and then based on that interaction I'll make the next move, and then before you know it you're forming a dance.” The central belief that prevents her ideas swirling into space and that binds everything together, no matter how complicated the choreography, is that “the work we make, whether we like it or not, acts as our autobiography, circling our career.” This helps create a sense of cohesive style, no matter the choice of material. It helps Donna remain as fluid as her wandering spirit. 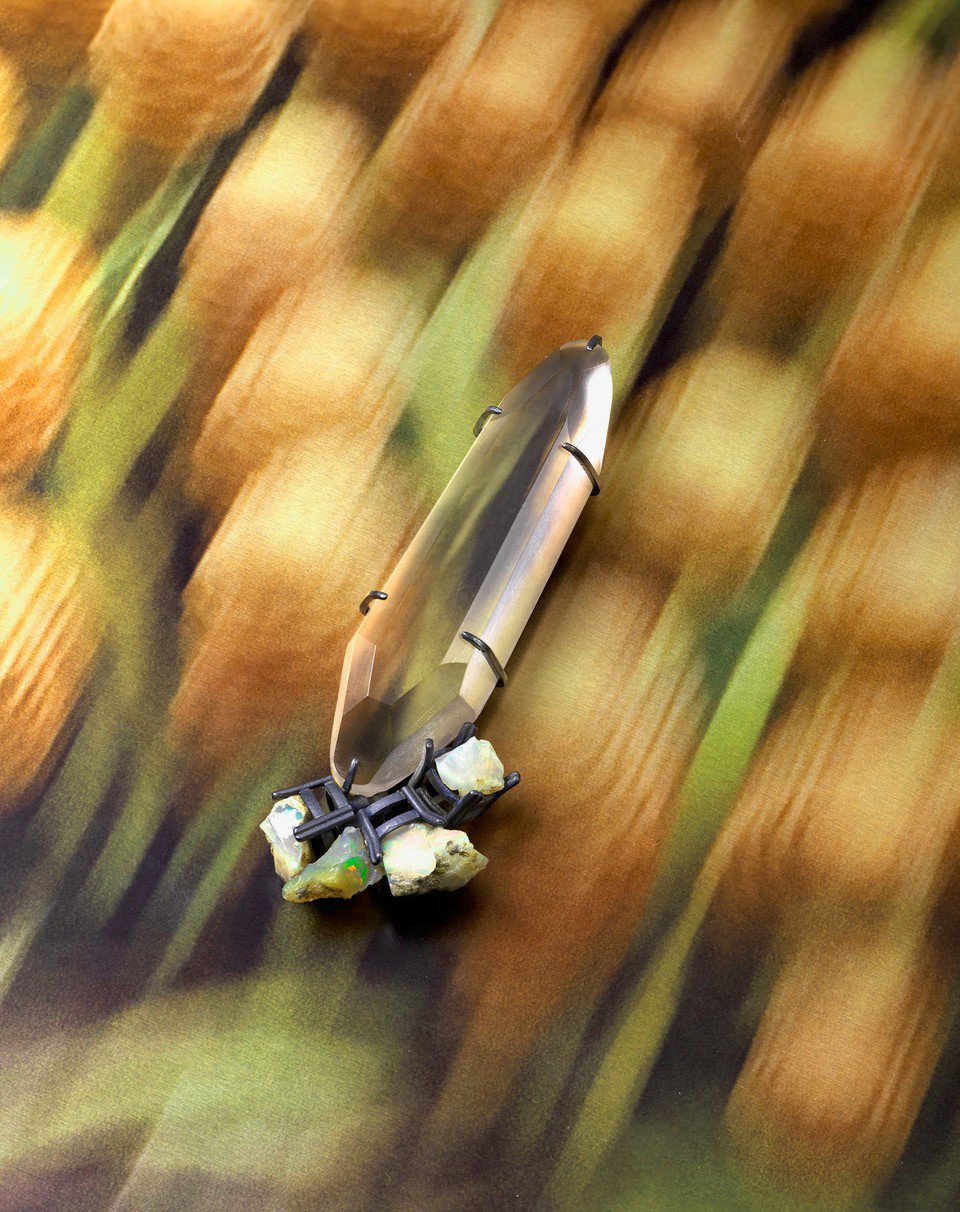 She shows me some work by the German maker Iris Bodemer, when I enquire about a woman she particularly admires. Not surprisingly Bodemer’s style echoes her artistic personality. “How amazing is that,” she says showing me her work, “I don't think they were an overnight success, it was a slow burn, so it just shows – never give up. They have such an interesting fusion of traditional materials with the artistic expression and that’s where her work speaks to me.” It is also where Donna’s work speaks to me.

On ending our conversation, I grant her one wish from the jewellery fairy godmother: “It would be for people to recognise and value art jewellery. I think that's definitely the way forward. Particularly as women – it's interesting when I graduated from RMIT (a global university of technology and design) in Melbourne, I did a round of the galleries and got orders and worked my backside off day and night to fulfil them and it was like, welcome to the real world of being a professional, a practitioner. And, it was interesting that it was men buying my work and women returning it, because it wasn't the traditional. This has since shifted because women are now definitely buying for themselves. The majority of my clients are now women which shows how far we have come."

She continues: “I think that's a real vote of confidence of how far we've come that women are now buying for themselves. But, I'd like to see more women really going for self-expression and not just lots of mass produced jewellery. We need to buy less, and buy to last, to pass down the generations. Buying and collecting for the love of it, for the expression of it.”

Now that’s a wish I can get behind.

More from Donna
More from Ella
Back to top