A woman’s identity in jewellery and art: Part one

In this three-part series for International Women's Day, Jeweller Ella Fearon-Low spoke with three inspirational women using the intersection between jewellery and art as a way to access female creative identity. This is part one, featuring artist-jeweller Zoe Arnold.

When I chose to retrain as a jeweller I explored studying sculpture. Having spent my childhood engrossed in projects making miniature things, jewellery won out. From the outset I have been interested in the links between jewellery and art and have always viewed it as small-scale wearable sculpture. I was in awe of Maisie Broadhead’s work when I first saw it, pearls tumbling out of a contemporary old mistress portrait. I have spent many hours sketching and marvelling in the V&A’s jewellery galleries, at art and artist jewellery past and present, from Calder and Ramshaw to Speckner and Shoshtary.

For International Women’s Day I spoke with three jewellers I admire. Each chosen for their practices and the way that they merge jewellery with fine art in different ways. In the UK we seem more reticent to embrace this space between art and jewellery – we are not brought up with the language of it in the way that continental Europeans are. I would love to see more appreciation of this work in the UK and more opportunities to exhibit and talk about it.

Artist-jeweller Zoe Arnold is perfect to begin this conversation. When I think of Zoe’s work, I see a refined balance of materials, a strong narrative element - sometimes closely linked to her own writing, and a unique decorative signature. It is beguiling, so materially subtle, personal and recognisable that surely everyone would like to own a piece. For me it would be the beautifully boxed three single earrings in the Crafts Council Collection or the alabaster bust with zinc, silver and bone pendants about its neck – a fertility sculpture available direct from Zoe (in case you are a wealthy benefactor who would like to buy it for me). 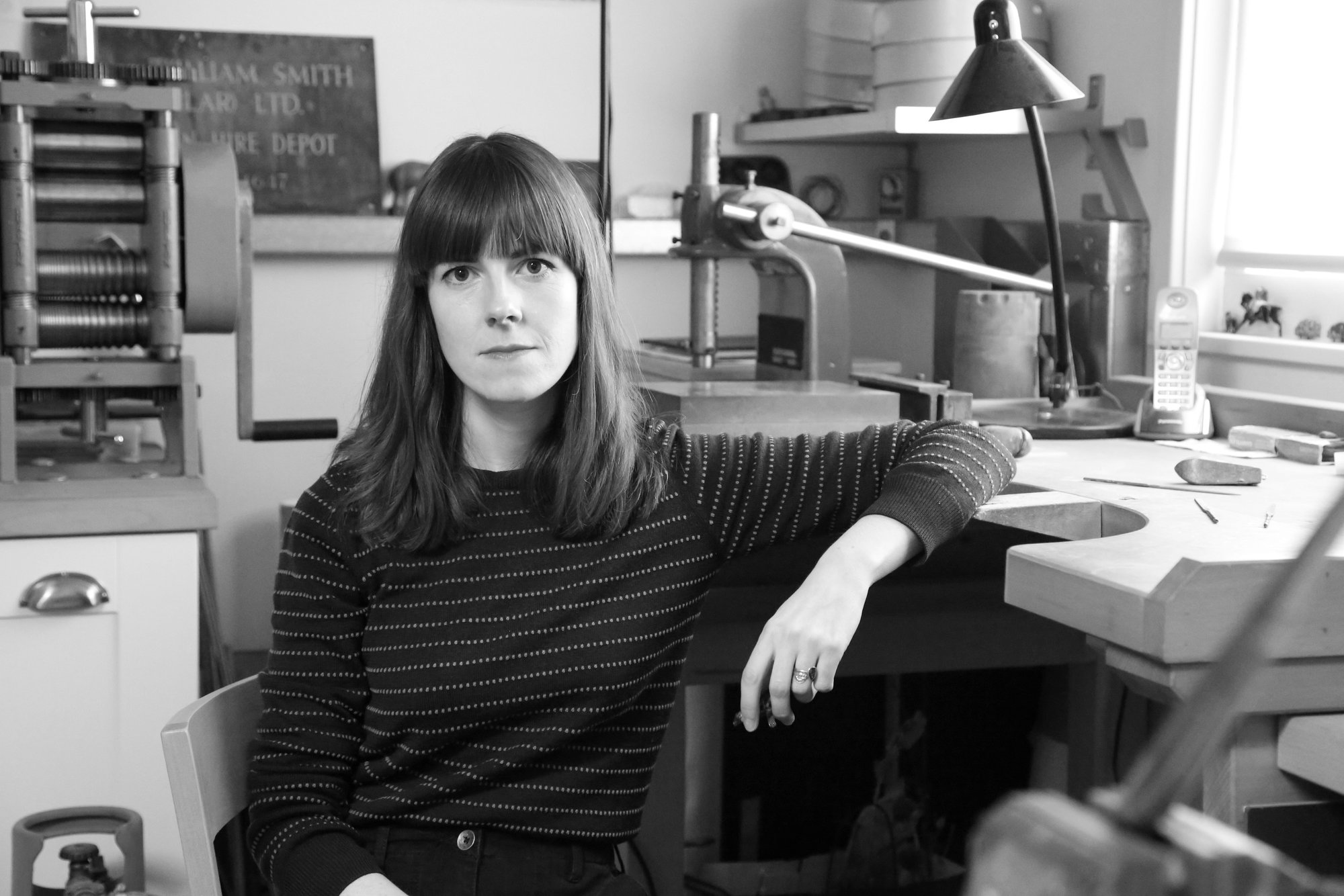 Zoe Arnold at the bench

Zoe has a connection to Morley College (a London-wide college with centres in North Kensington, Chelsea and Waterloo) where I studied, through her working relationship to Barbara Christie who ran the department there for many years. She now teaches there herself, and I have been lucky enough to study with Zoe whose gentle energy, patience, imagination and technical generosity know no bounds. Zoe is currently a mentor to me as I strive to develop my practice, so I’m looking forward to catching up.

We greet each other virtually; Zoe cleans her glasses and we’re off. I begin by asking her how she defines the way she works and it strikes me how confident she is when describing who she is as a maker; there’s a certain kind of defiance with how other people might interpret her answer. “I like to think of myself as an artist,” she says, “although I think a lot of people in the art world wouldn't agree with that but, you know, really sucks for them. I would say it’s art jewellery. Not all of it, not everything I do is specifically more art-based but the things that I value in my work are the art-based pieces. They're the ones that I love.” Zoe also describes herself as a practical person, someone who isn’t so much concerned with “wearing nice things and going to events,” even though she admits that she would “love to own the work of more jewellers."

In fact, the last time she was at Collect Art Fair at Somerset House, back when times were more normal, she made a marvellous improvisation: “I got this pair of candles with string between them and well, I just hung them over a button on my clothes because I literally had no jewellery to wear. I was like ,'I'll just wear that.' And it looked good, I quite liked it.” This side of her character is also expressed in her love of ‘found’ objects which continue to be an inspiration for her, as she says: “I do collect found objects massively and they do inspire me. I have to stop myself doing it - I don't think I've got many, but I get told not to collect anymore, mainly by my husband. I’m into rust, decay, lost items and things that might have a bit of a story behind them.” 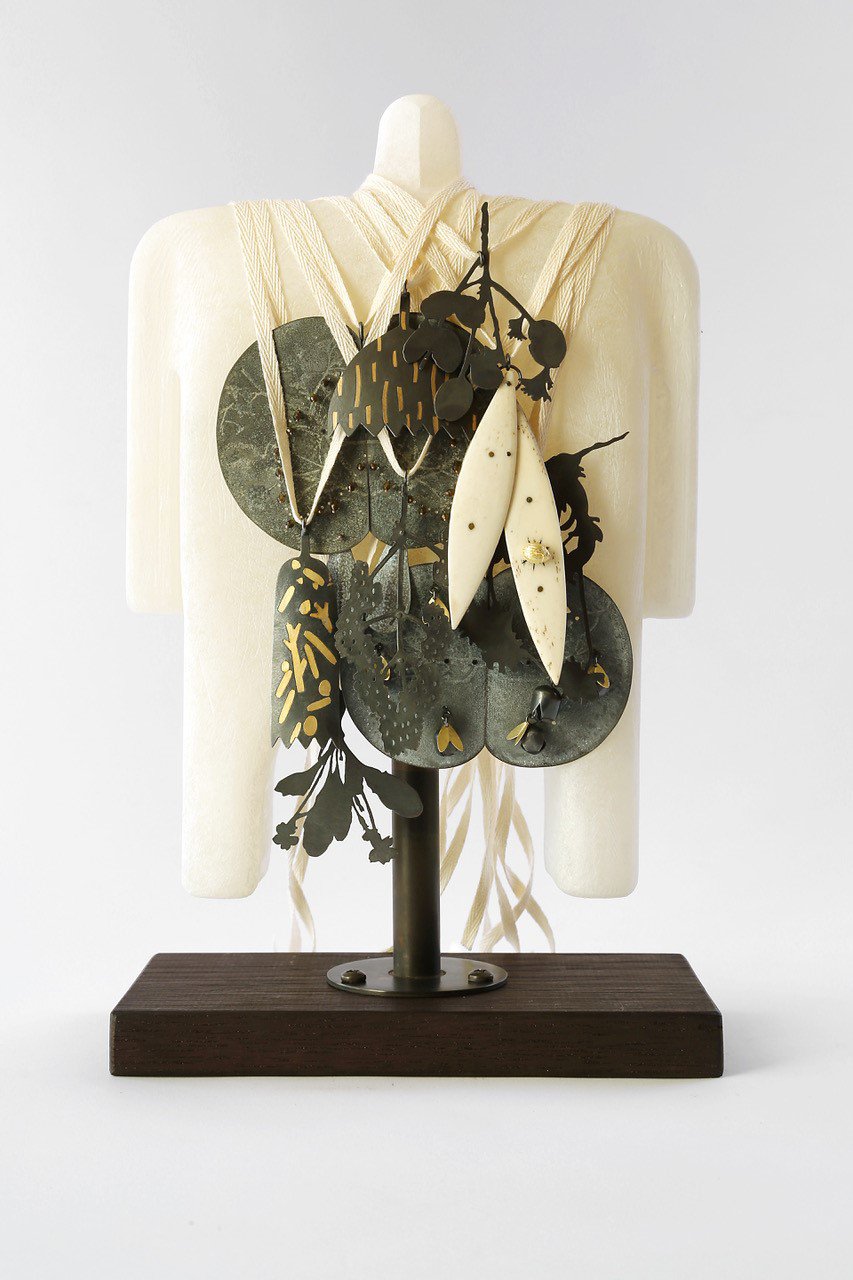 These stories matter to her and making things crisp, clean and polished can take away the feeling of a material. She sums this up nicely by calling herself,  “a kind of cabinet of curiosities person,” and how the modernisation of museums upsets her on some level. “I love the look of something old; I love the old cabinets with all the old stuff in them and then suddenly they’re modernised and turned into big, glass, shiny things with buttons to press and that’s not me. It stops being a museum. For me it’s about collecting, discovering, searching; and it's to do with treasure - that's what my work is about as well.”

I return to the relationship between art and jewellery. Zoe accepts that sometimes it’s not worth trying to make someone call you by a certain name, such as artist, but instead, to concentrate on making what you love. “Just make whatever you want to make. Why do we have to label it as one thing or another? You know, just make something and enjoy it. If that's what you're driven to make, that's what you're driven to make.” In many ways this is the definition of the call to art, but it’s easy to get caught up with definitions and what different galleries choose to accept.

For her, jewellery should have a right to be displayed as art and she has stayed true to her beliefs: “I've turned down so many opportunities through the years because, somewhere will ask you to exhibit with them and they’ll say, 'Oh, we've got the jewellery cabinet to put your work in.' And I just say, 'Well, I'm not doing it, I'm not doing it.' Obviously, people have problems with insurance because jewellery is quite pocketable, but I'm sorry, I'm not going to be relegated to the little glass cabinet in the corner of the gallery. It should be out there in amongst everything else, elevated with everything else.” I admire her bravery in this and am already imaging exhibitions with more wall mounted and plinth mounted jewellery. 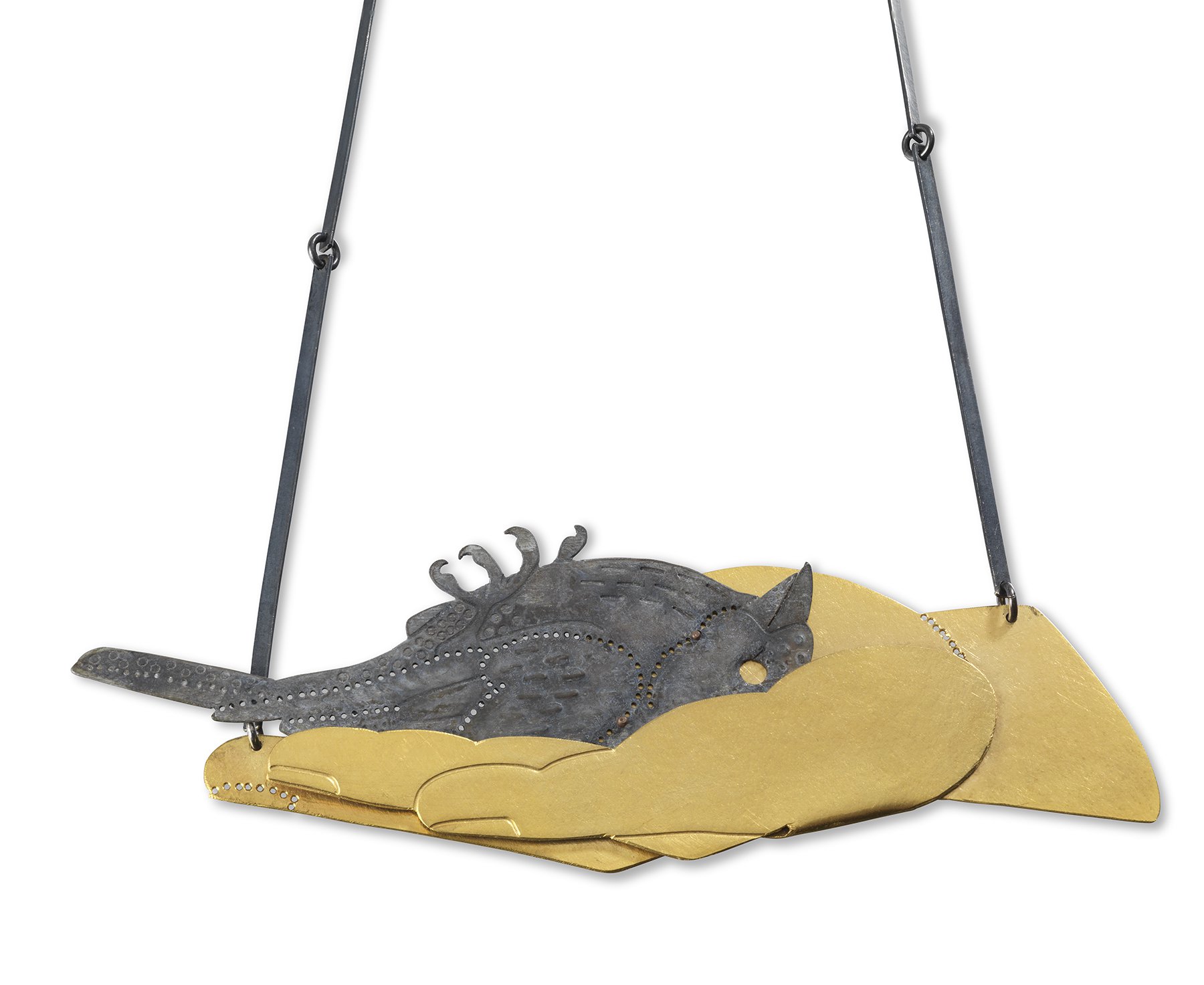 "I like questions; I like leaving people with questions rather than answers simply because I think that's what I enjoy in other people's work as well. I like not understanding something.”

Her love of poetry also fuses incredibly well with this ethos of confident self-definition in things she makes and experiences. I confess to Zoe that although I have read some of her poems, I was left thoroughly bamboozled. She replied: “They all have hidden meanings to them, which I don’t explain and they'll often be about something else. Lots of people don't really understand but I like that. I like questions; I like leaving people with questions rather than answers simply because I think that's what I enjoy in other people's work as well. I like not understanding something.” Embracing questions and not always needing an answer straight away maybe helps us grow as people and I think that’s what Zoe means: the easy way isn’t always best; it’s a philosophy that welcomes challenge and change.

Of course, I ask her if there is a woman, or women, in the jewellery world that she particularly admires. She says she loves Bettina Speckner (a German jewellery designer who is famous for using 19th century photography in brooches) and remembers a quote from British playwright Harold Pinter that she took from a newspaper where he explains that some things are included in his work because he wanted them there, no more, no less. This is why she loves Speckner’s work, because it looks as if it needs deep analytical reasoning to explain it, when in fact, it’s just the way she wanted it to look. “I think that’s lovely,” Zoe says, “and when we were at university, we were often forced to really think things through but when I'm with students I always tell them, you know, 'you've got to be confident in your choices and if you decided that's what you wanted it to be, that's enough’ - your decision is enough.”

Having a bit of fun, I also ask her what she would wish for if I was her jewellery fairy godmother. Along with a “lovely exhibition in a big art gallery somewhere,” coupled with a laugh, she says we need to think more about how we become less insular and more outward looking." She is genuinely concerned with the future of the industry and broadening client bases and opportunities. It might also be why much of her work can be found in the collections of other jewellers; she speaks to creatives in a way that only a true creative can and we love her for that honesty. I hope Zoe gets her lovely big exhibition; I can’t wait to go to the opening.

See more from Ella below read part two in the series

More from Ella
Part two
Back to top