In the Workshop: Rauni Higson

We spoke with renowned silversmith and Liveryman of the Goldsmiths' Company, Rauni Higson, on finding her home in the mountains and her place in the industry

5,000, 6,000. The rev counter on the old Volvo indicated Rauni’s car was battling with the mountainous terrain of north Wales. The car ascended a final hill and there, nestled amongst a row of terrace houses, framed against the giant natural formations of the landscape, was the old Quarryman’s Cottage. “This is where I want to be,” she said to herself.

It was 1996. Just days earlier, Rauni had graduated from The School of Jewellery in Birmingham. Ian, a retired engineer and fellow graduate studying horology, had asked her what she was thinking of doing after college. Rauni, who had studied Silversmithing in Finland before moving to Birmingham, craved a return to nature and open space. “I want to move to North Wales,” she told him. “I just want to head to the hills and escape.” Ian reached into his pocket and produced a crumpled photograph of an old cottage, “I might be able to help you there,” he said. In the words of Rauni, it was “the most amazing opportunity someone has ever given me,” and she has certainly made the most of it. She renovated the cottage and lived there for the next ten years. 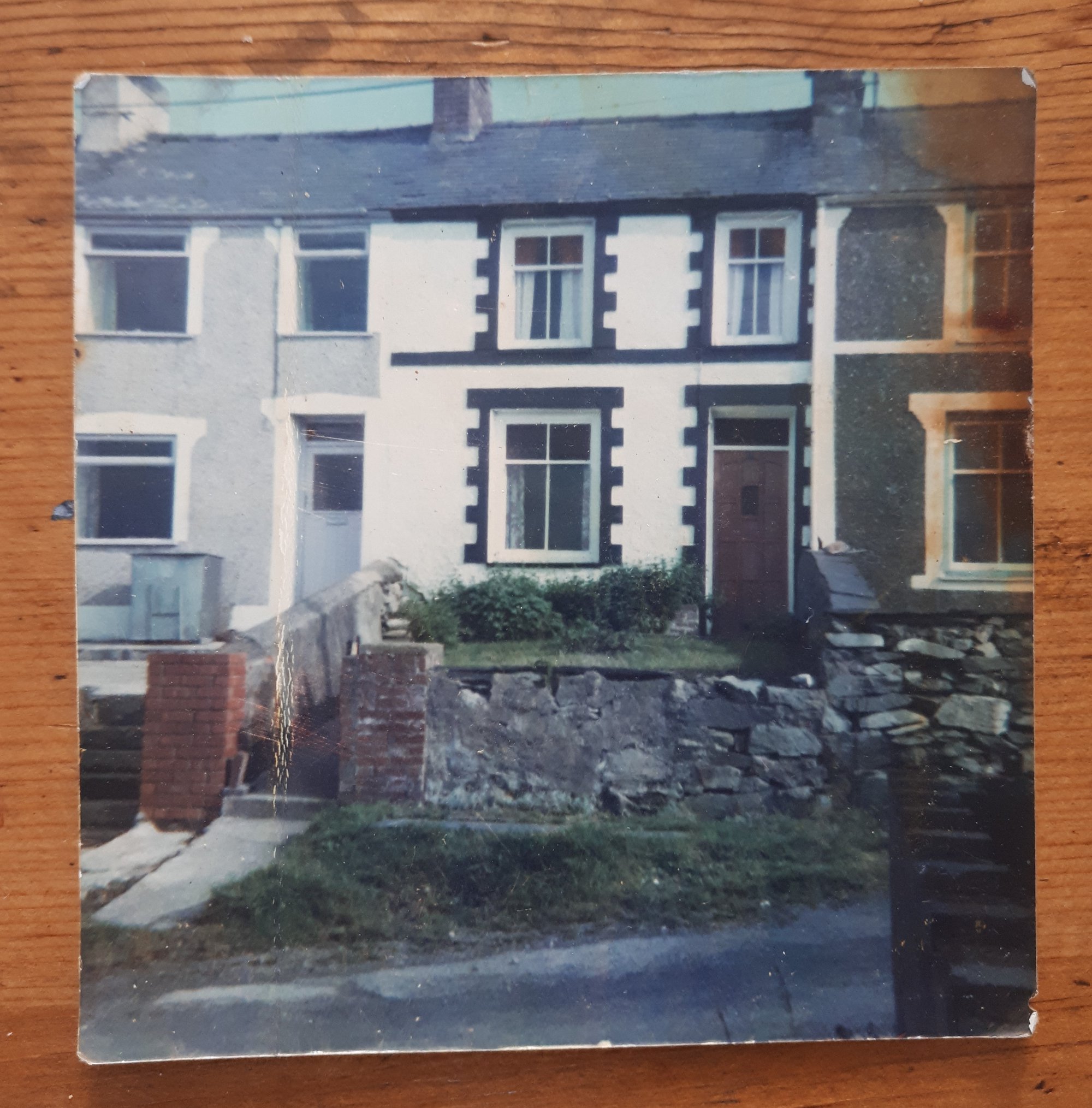 Rauni Higson now works from a converted chapel a few miles from her home. Her workshop is set out over two large units and the view is uninterrupted onto the dramatic landscape of Snowdonia - a rich backdrop of mountainous crags and rugged coastlines. “It's not only the hard features that I love, it's the way the landscape constantly transforms according to the light and the weather. I find it an endless source of inspiration.” 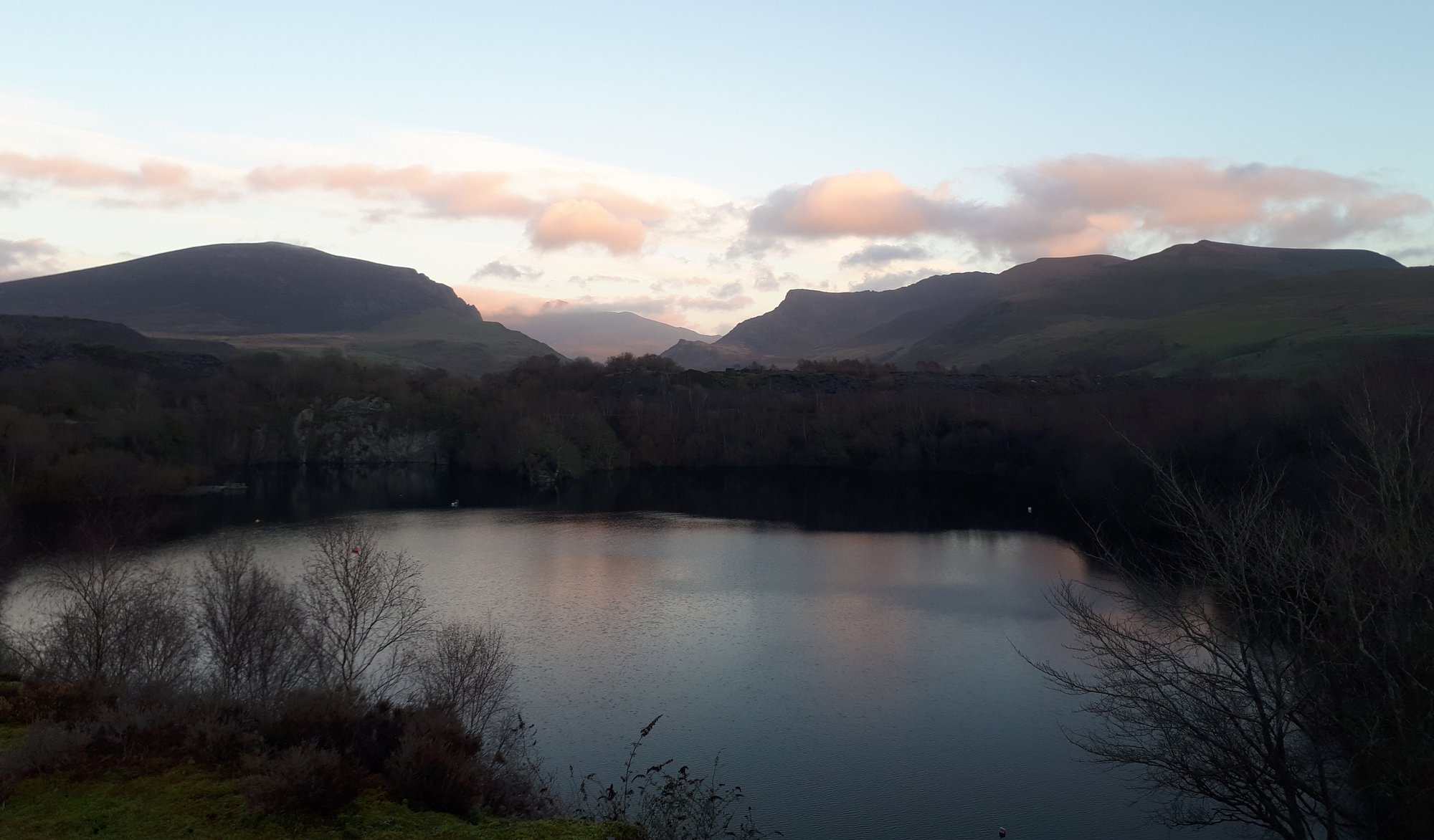 Rauni is currently finishing off the largest scale commission she has ever created, a pair of Acolyte candles and a 7½ ft Processional Cross for Liverpool Metropolitan Cathedral. “It's a sculptural piece, with eight arms that present a cross formation from every angle of the Cathedral's majestic circular interior space,” she says, “I can’t wait to see it being used in the Cathedral, which is a stunning modern space, and truly inspires and uplifts the spirit, whether you are religious or not.”

Much of Rauni’s work is inspired by the environment and combines the timeless endurance of mountains with a subtler elegance. A piece of which she is particularly proud, is the Mountain Burn Rosewater dish commissioned by the Goldsmiths’ Company to celebrate Lord Sutherland's time as Prime Warden. The dish depicts the majestic flowing lines of the Scottish mountain burns (highland rivers) carving life and movement through rock. 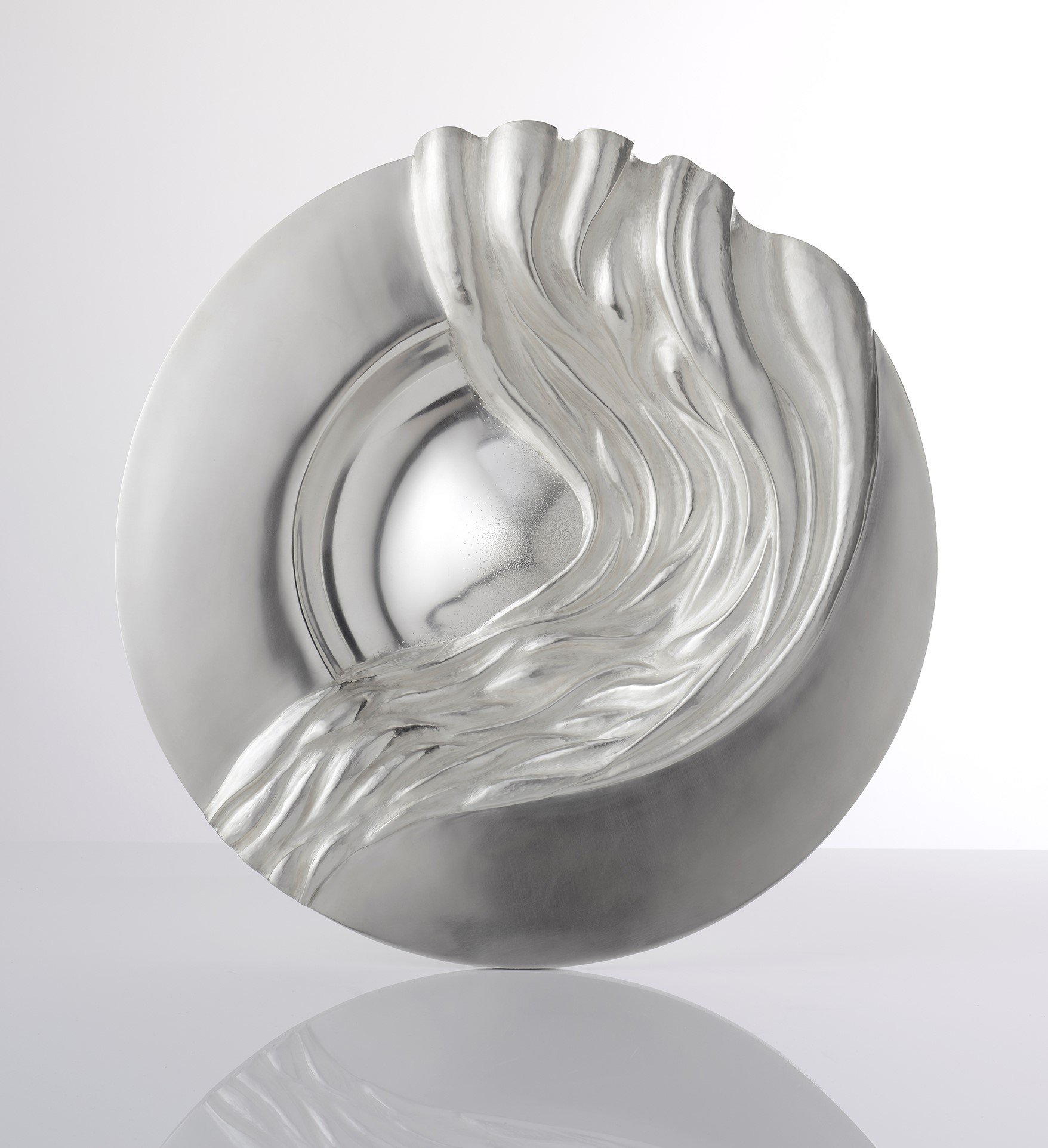 “I was among one of the first women to make a piece that forms part of the Contemporary Buffet (a tiered display in the Livery Hall at Goldsmiths’ Hall that displays the Company's ceremonial plate), and I really set myself a challenge both technically and creatively.”

To make this piece work, I needed to form large flat surfaces next to undulating ones, while managing hundreds of solder joins. I am always very proud to see it on display at Goldsmiths’ Hall. It brings an element of the wild mountain scenery into the City.”

Now a well-established silversmith and Liveryman of the Goldsmiths’ Company, Rauni recalls some of the challenges she has had to overcome during her career. “I found it particularly hard to get help from my bank and secure investment in the early days, which seemed definitely harder as a woman, as I saw my partner and other male business owners get money thrown at them. However, slower, steadier growth has helped me create strong foundations for my business as well as a certain resilience and adaptability, which I may not have gained otherwise.” 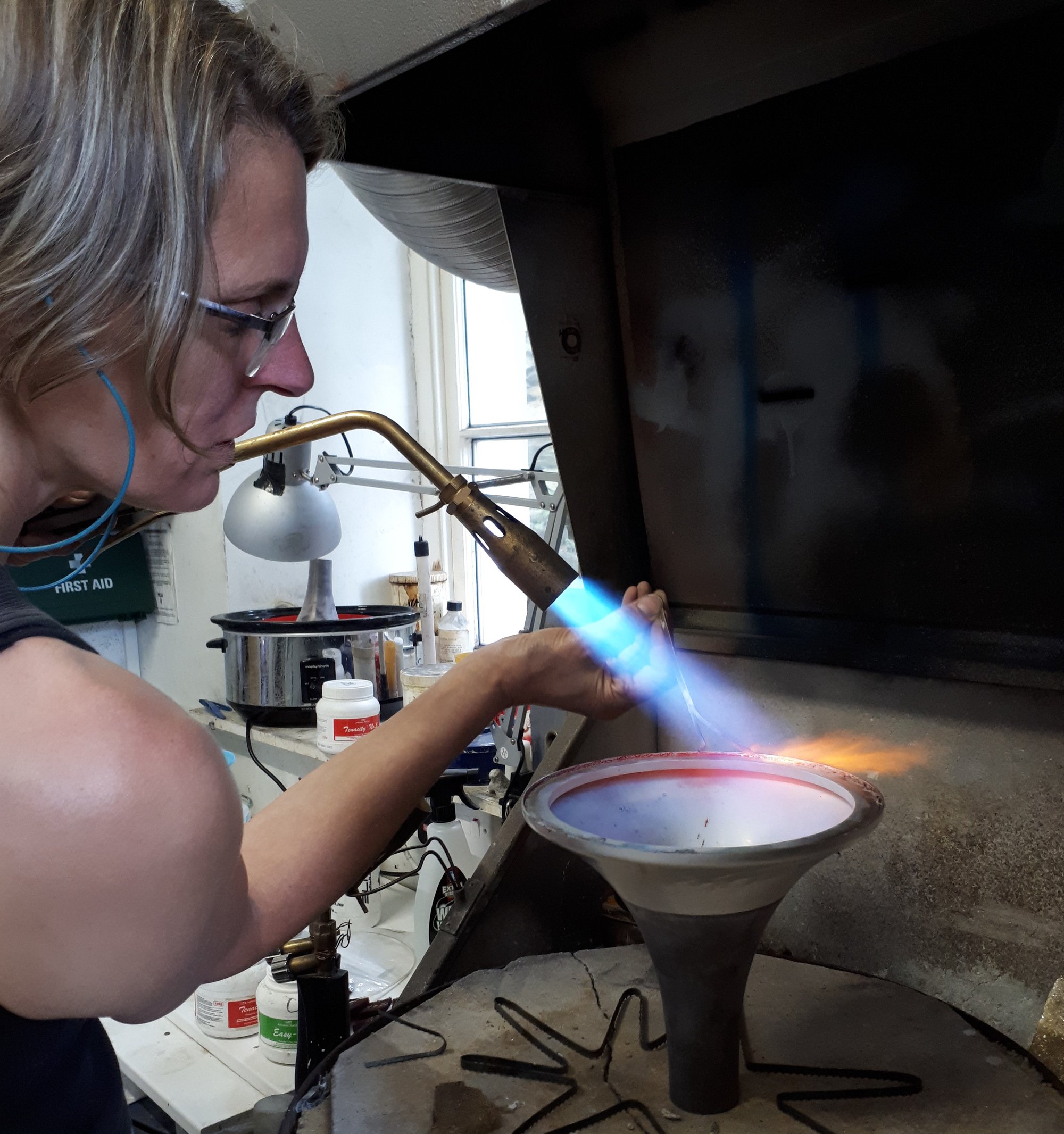 The foot and mouth outbreak of 2001 was one such challenge (her workshop used to be on a farm), which she met by changing her business model through diversification, as well as the current Covid-19 crisis, which is causing changes to the way we all live and work. The experiences of the past have given Rauni the tools to manage her business through upheaval while also having the opportunity to help support other members of the silversmithing community by adapting training rapidly to meet demand. As she says:

“Sometimes you don’t know the value of the present moment until you need to draw upon its lessons in the future.”

Her steadfast and determined approach to life mirrors that of the mountains she calls home. But individual character is only part of the story: she is quick to acknowledge the role others have played in her career. She counts many metalsmiths and educators as important mentors, including Cindy Eid from the USA. “Cindy is a brilliant teacher. I experienced a very powerful moment while I was enrolled on one of her silversmithing classes, when I realised I was being taught in a new way, because she was a woman. Her approach was holistic, intuitive and supportive, and connected with me in a unique way. For example, she taught me the importance of body awareness and posture while working, which I always pass on where possible.” 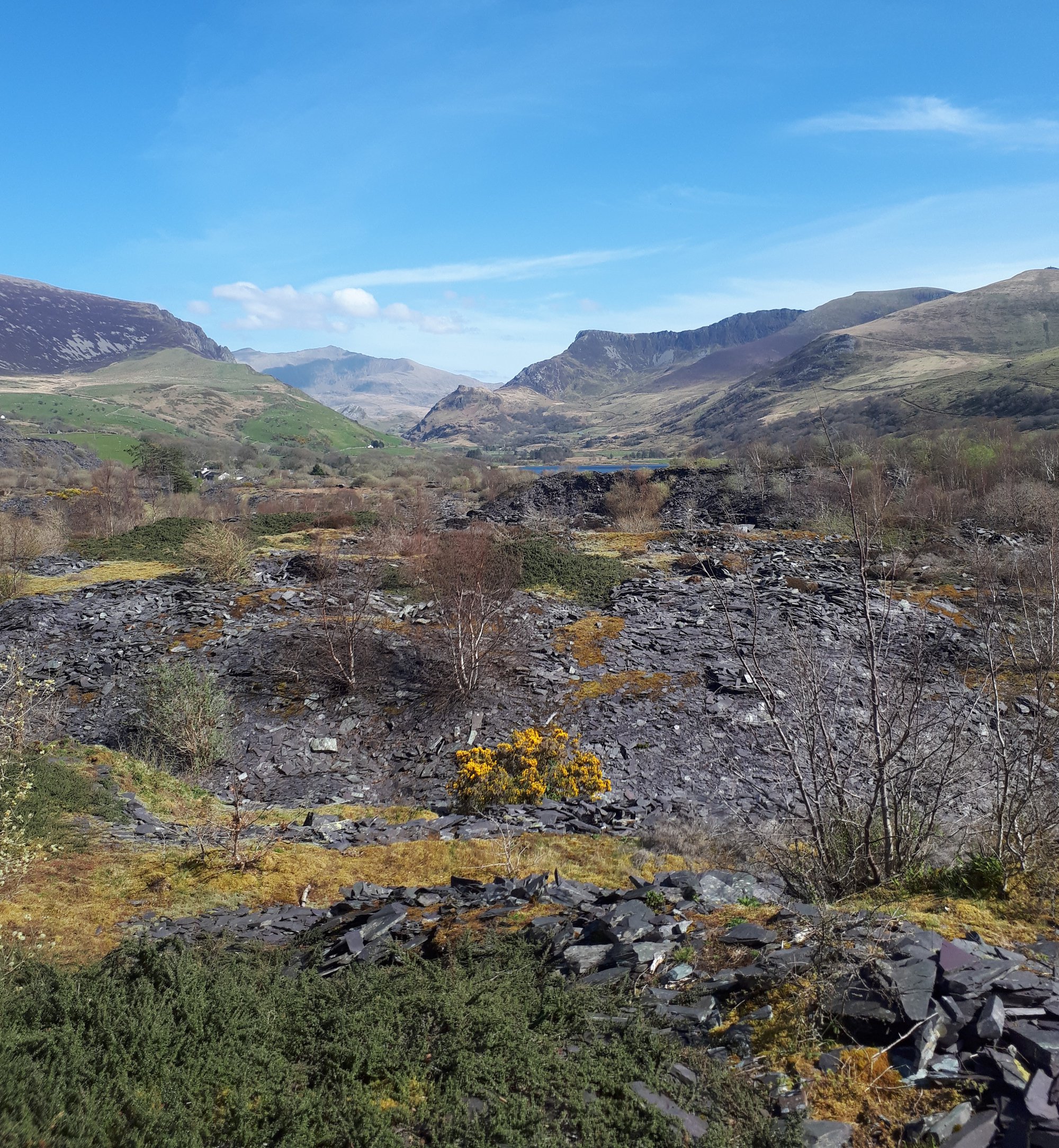 Spirit of the mountain

And when like-minded individuals come together, they’re able to form some of the most influential groups. “I used to be passionately independent,” Rauni says, “But now I am part of a huge network of mutually supportive businesses, and it feels great. Independence goes beyond having power and choice, it’s about allowing others into your life and asking for help.” And this is the one thing she would tell her younger self, how to ask for help, “because mostly, people are very ready to give it.”

Rauni espouses the importance of community, even for those who prefer working alone, and praises the efforts of Contemporary British Silversmiths where she was Chair from 2014-17. “CBS changed the face of the silversmithing industry and made it a beacon for others who look to the UK.” During her time at the helm, Rauni founded the CBS Skills Training Programme. A passionate educator, she believes that passing on skills adds a satisfaction to life that extends beyond working with silver – “I love seeing people blossom.” The programme, now in its third year, has begun an exciting new partnership with the Goldsmiths’ Centre. 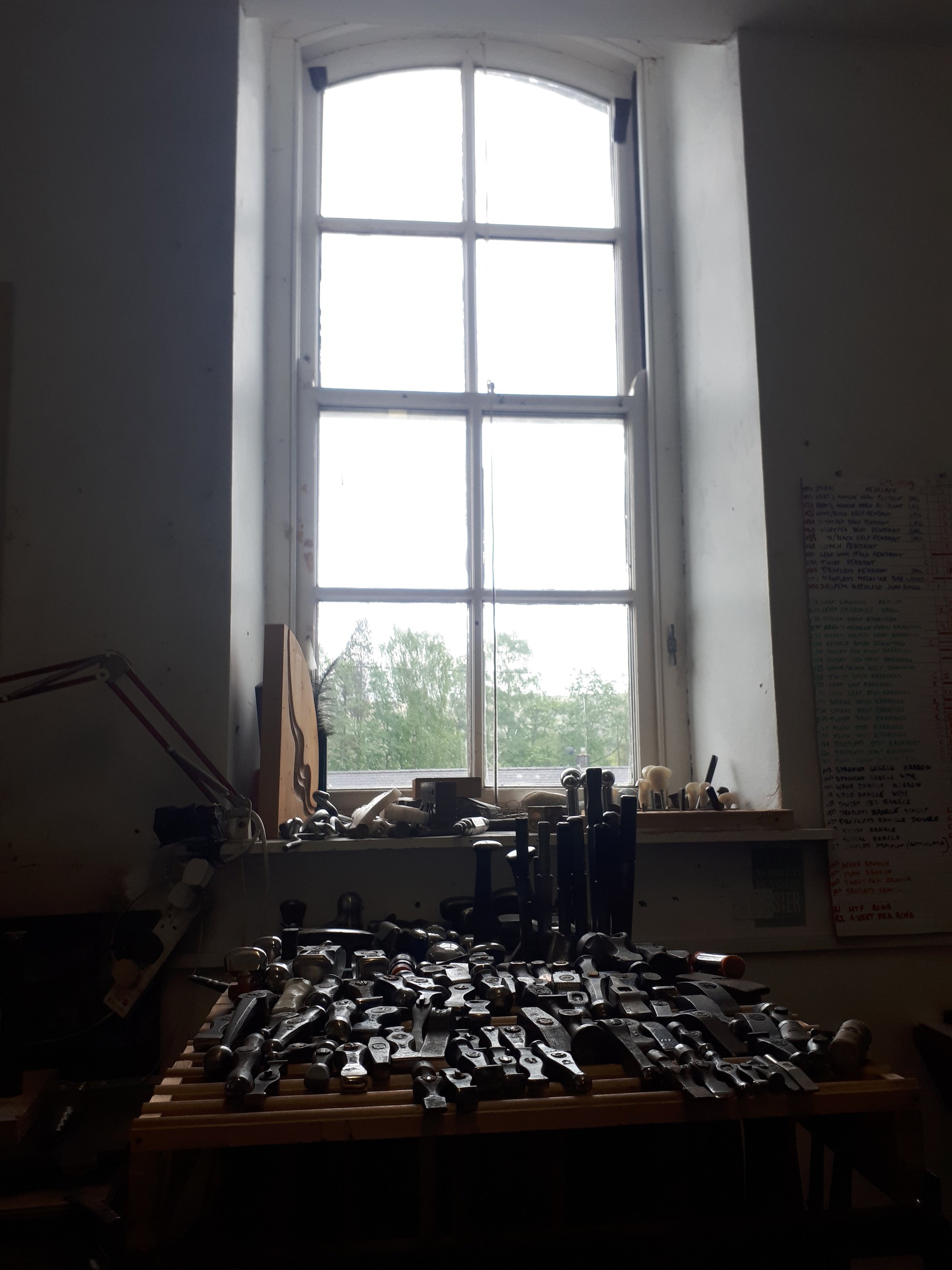 Tools inside the chapel

A thin veil of rain covers the rocks outside the workshop, shafts of light pierce through the chapel windows and fall on her many tools, like mysterious holy artefacts. Reflecting on living and working on the mountain, Rauni says: “For the first time in my life, I feel like I’m really at home.” A pilgrimage was never meant to be easy, but for this one at least, the hardest parts are now behind her. When confronted with a mountain, select a low gear and keep on climbing.

back to stories
Back to top