Goldsmiths' Company Curator, Dr Dora Thornton, takes us on a royal journey through the centuries with some remarkable examples of silver from the Collection in a new display called 'For Remembrance Ever After'

Silver plate has always had a role in marking important events in our national life, such as coronations, royal marriages or royal jubilees. It was the loan from the Inner Temple of the superb silver layette basket, made in 1644-5 to mark a Stuart marriage, and the decision to research and display it, which prompted us to take another look at silver and gold plate with royal associations in the Goldsmiths’ Company Collection. Sadly, our display had to be taken down when the Hall closed in response to COVID-19, but we hope to put it out again when the Hall re-opens. Meanwhile, Irene Galandra Cooper and I have written about some of the key objects and what we have learnt about them in putting the display together. You have to play with objects in order to understand them; it is a bit like learning a language.

Themes of lineage, loyalty and memory flow through the Collection, from 1660 to the present. The role of two female rulers, Queen Elizabeth I [1558-1603] and HM Queen Elizabeth II [1953-present] emerges strongly as the link between the first, iconic object in our Collection and modern commissions made by the Company into the 21st century.

The story begins with the Bowes Cup, hallmarked for London 1554-1555; a splendid formal covered cup in silver-gilt made in the latest continental style - the stem is directly taken from a contemporary engraving by Balthasar Sylvius. The Cup is crafted around what was originally a rock crystal cylinder at its centre. Rock crystal was thought to have almost magical properties in the mid-16th Century and was only within the reach of the wealthiest patrons, which may go a long way towards explaining the tradition that the Cup was used by Queen Elizabeth I at her Coronation in 1558. 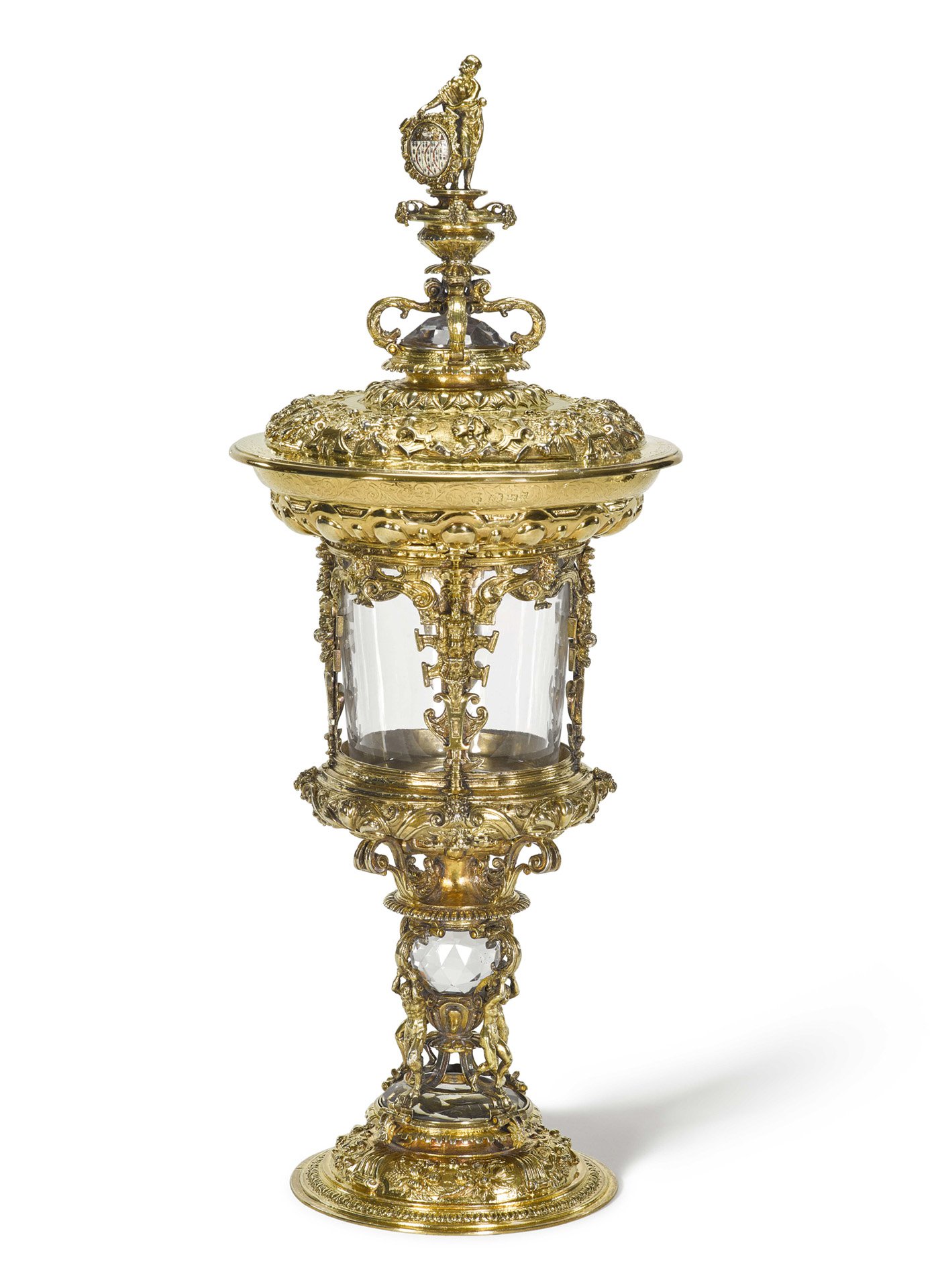 The story goes that the Cup was given by the Queen as a perquisite or “perk” [fee] to Sir Martin Bowes who, as Lord Mayor, may have served as royal cup bearer at the Coronation banquet; his arms are enamelled on the shield held by the female figure on the lid. He gave the Cup to the Goldsmiths’ Company in 1561 during his time as Prime Warden. In doing this he stated that he wanted it to be thought of as “a remembrance for ever after”, though whether of him, or of the Queen, is unclear. 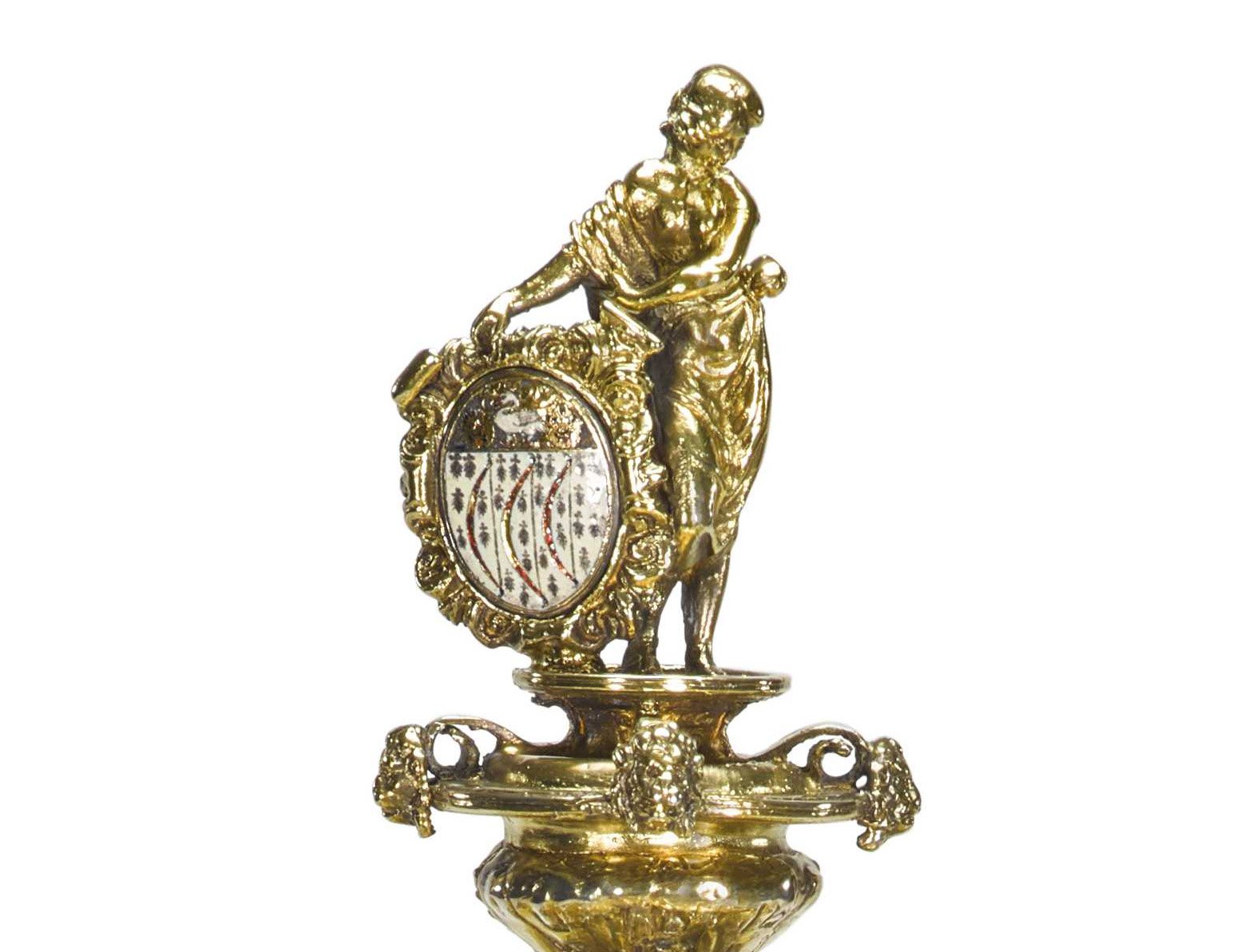 It was certainly heavily used as a loving cup at annual feasts in his honour during the 17th Century; the rock crystal was broken and replaced with a glass cylinder at some point during its long history. It was always considered part of the identity of the Company as well as being a piece that long represented the very best design and taste in English silver. It came to be known as “Queen Elizabeth I’s Coronation Cup”, which probably explains why it escaped being melted down, unlike so much of the Company’s silver in the turmoil of the 17th century. 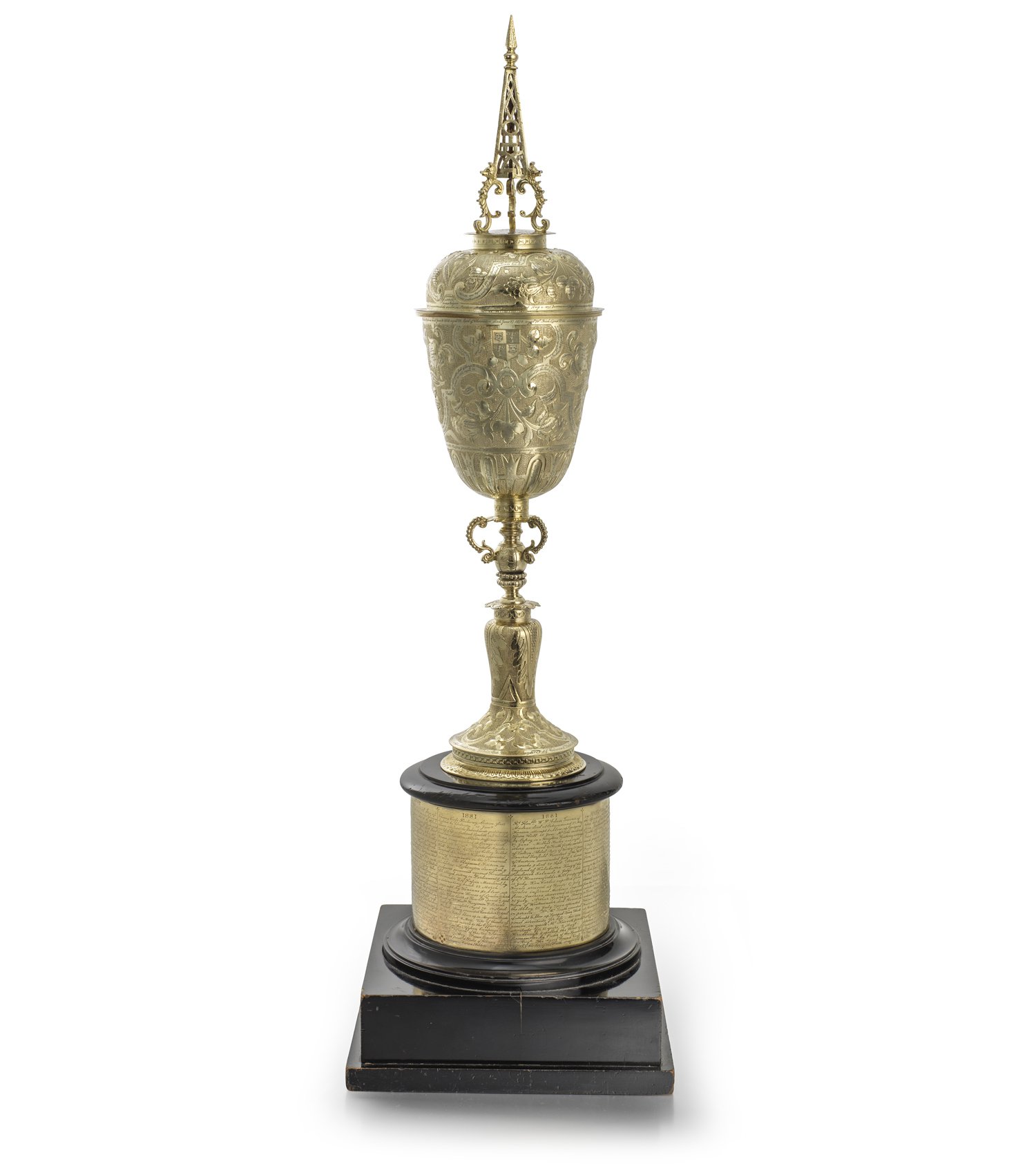 So it was surely with the Bowes Cup in mind that the Company held a competition to design a Cup to commemorate the Coronation of HM Queen Elizabeth II in 1953. The winner was Professor Robert Goodden [1909-2002], architect and Professor of the Department of Silversmithing and Jewellery at the Royal College of Art. His design, with its high foot and steeple finial, referred back to a traditional English form of steeple cup, which was fashionable around 1600, at the end of Elizabeth I’s long reign. The Company has a remarkable example in its Collection of a historicist cup of this kind—a faithful reproduction—which was presented by George Lambert in celebration of Queen Victoria’s Golden Jubilee in 1887.

As a silversmith, antique dealer and Prime Warden of the Jubilee Year, Lambert was involved in the design of the cup, and he chose to copy this old English form to commemorate a significant event in his own time. His steeple cup is superbly hand-engraved all over the strapwork design with minute inscriptions relating to key events in the life of Queen Victoria. Lambert gave the finished cup to the Company with a printed vellum scroll recording the inscriptions, ensuring its status as a historic document.

Inscriptions on the Steeple Cup

Gooden’s Queen Elizabeth II Coronation Cup is rooted in this very English tradition, translated into a completely modern idiom. His design was made by Wakely & Wheeler and marked with the Coronation mark; the Royal Arms are engraved on the foot, glimpsed through the scrolls on the footring. Craftsmen who worked on the Cup still remember its making, to the extent that the hammer used by Henry Pierce to emboss the lobes on the body was presented by Wayne Mackintosh to the Company Collection as something of a relic in 2018. 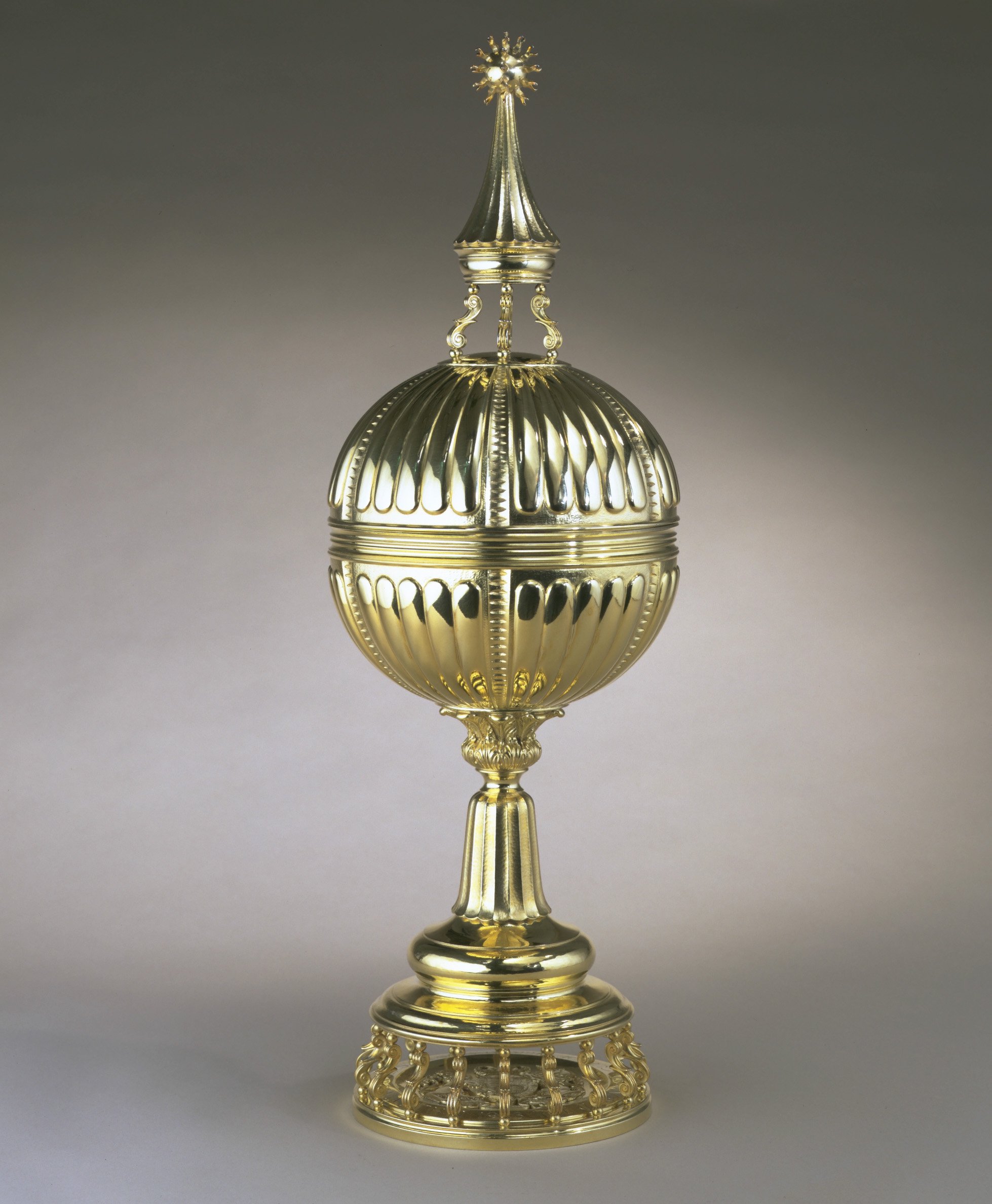 The Cup was presented to HM The Queen at a Mansion House Banquet on 19th May 1954, as recorded in an oil painting by Terence Cuneo which shows the young Queen holding it in her hands. On the table in front of her is the Bowes Cup. The Queen graciously gave her Coronation Cup back to the Company in remembrance of her ancestor, Queen Elizabeth I. 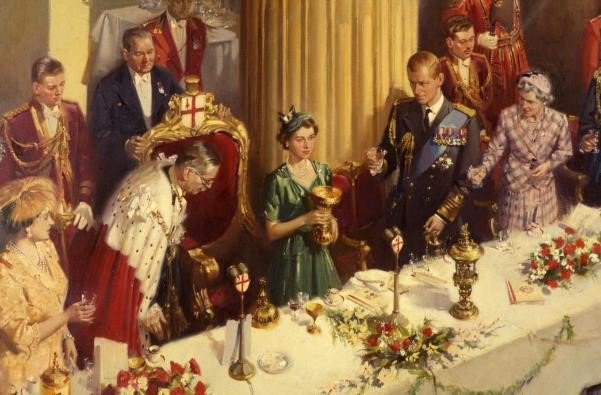 T Cuneo, Banquet at the Mansion House 19 May 1954 with Queen Elizabeth drinking from the Queens Cup

In doing so she was aware of the tradition behind the Bowes Cup in making memory, and the way in which the two Cups speak to each other across the centuries.