Little pieces of history: A brief exploration of Commemorative Marks

As the Platinum Jubilee approaches, Eleni Bide reflects on the unique marks that have been created to commemorate past jubilees.

For most of their history hallmarks have been a semi-secret language known only to industry insiders. The combination of symbols and letters stamped precious metals served as a visual code for assayers, who have been tasked with preventing fraud by goldsmiths for more than 700 years. In the modern world, the secret is out. Or rather it’s not a secret at all. In fact it is incredibly well publicised. Because the modern hallmark is a guarantee to both trade and consumers that the piece of silver or jewellery they hold in their hand has been independently tested, and is what it says it is. And along with this guarantee of quality and fineness, every hallmark has a story to tell: a story about the person or company who made it, the town it was assayed in, the year it was hallmarked, or an occasion so special that it requires a mark of its own.

The Queen’s remarkable 70 years of service and the fact that she is the first British monarch to reach this milestone is undoubtedly such an occasion. Designed by Thomas Fattorini Ltd, the Platinum Jubilee mark conveys lots of information in a simple, elegant design: an orb (suggesting royalty and the traditional mark for platinum) containing the Queen’s initials over ‘70’. Tom Fattorini, Director of the firm said they felt ‘very honoured to be asked via the Hallmarking Council to come up with some suggestions and our designers had great fun playing with a range of ideas.’

Whilst hallmarking has been integral to the work of UK goldsmiths since 1300, commemorative marks are a relatively recent part of the hallmark’s history, with the first one being introduced to celebrate the Silver Jubilee of King George V and Queen Mary in 1935. This voluntary mark was proposed by goldsmithing trade associations who recognised that the public, as well as seeing the hallmark on their silver or jewellery as a guarantee of quality, also used it to celebrate important moments in their own lives. Its popularity led to further commemorative marks: for the Coronation of Her Majesty Queen Elizabeth II in 1953; for the Silver Jubilee in 1977; for the Millennium in 2000; for the Golden Jubilee in 2002; for the Diamond Jubilee in 2012, and the Platinum Jubilee in 2022.

The week of the Platinum Jubilee feels like a golden opportunity to introduce five examples of extraordinary modern work in precious metal from the Goldsmiths’ Company collection. They all celebrate an important event within Queen Elizabeth II’s reign, and (nearly) all of them bear the corresponding commemorative mark (the exception being Rod Kelly’s Diamond Jubilee Rosewater Dish, which commissioned in 2012 and presented to HM Queen Elizabeth II in 2015.).

Commissioned by the Goldsmiths’ Company for a Mansion House Banquet in 1954 to mark the coronation of HM Queen Elizabeth II. The finished Cup was presented to The Queen at the banquet. Her Majesty then presented her Cup to the Company for the Collection. 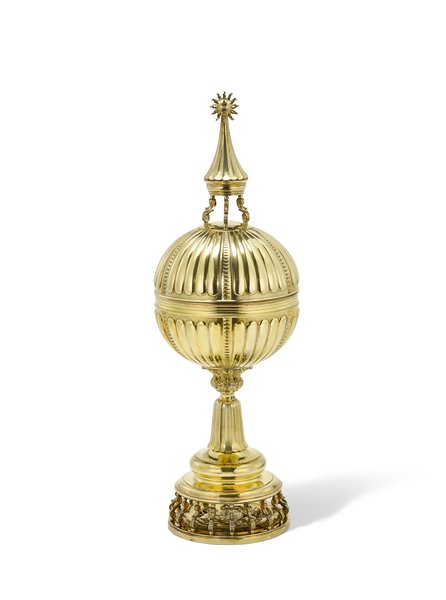 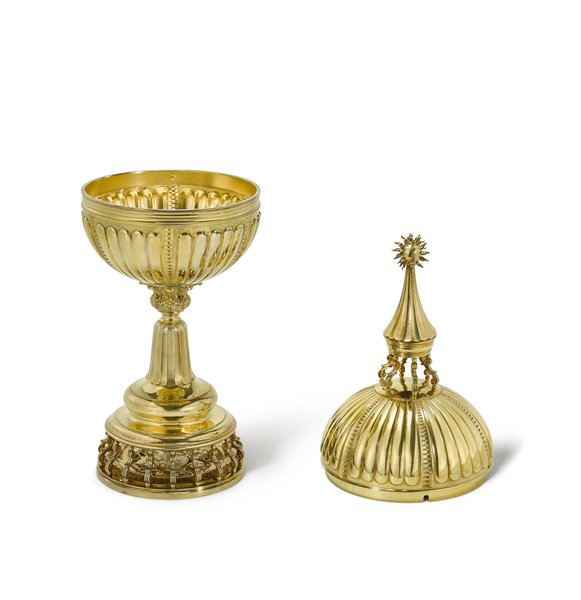 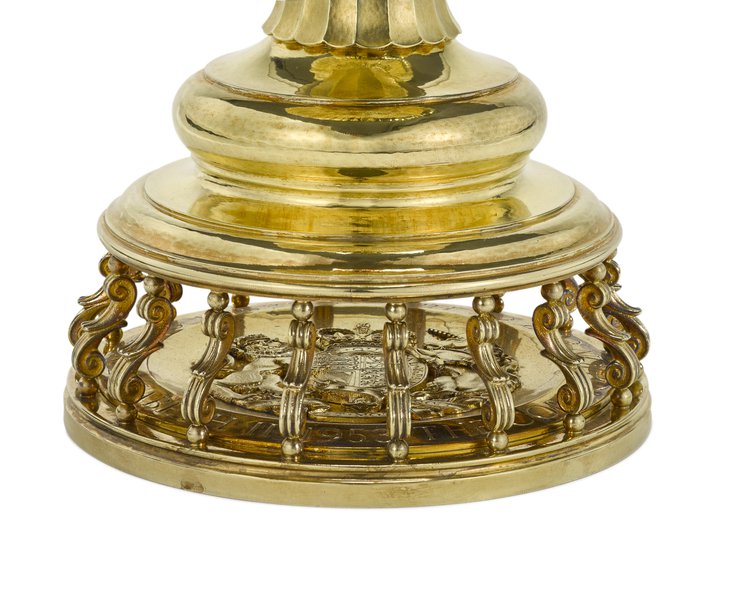 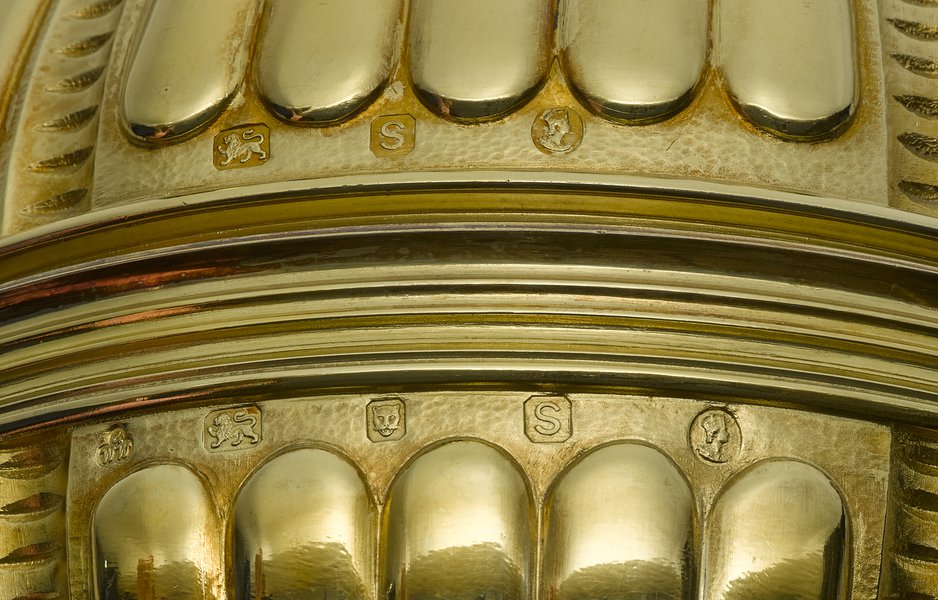 Leslie Durbin’s paperweight takes the form of Her Majesty Queen Elizabeth II’s Silver Jubilee Commemorative Mark and is cast with an applied portrait bust of The Queen. The marks are part of the design, including the mark for Britannia silver, second from the left, and the commemorative mark on the far right.

Silver, cast and hand-finished. Commissioned by the Goldsmiths’ Company in 1977. 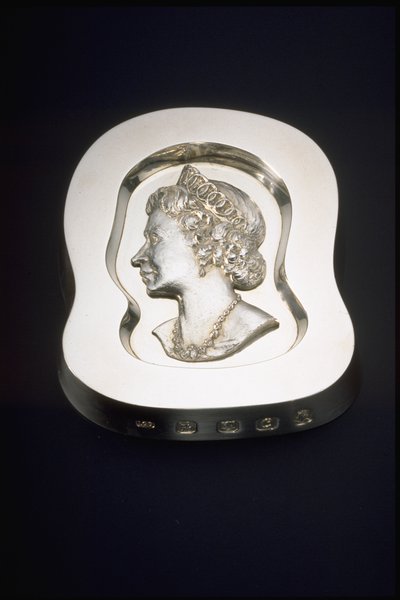 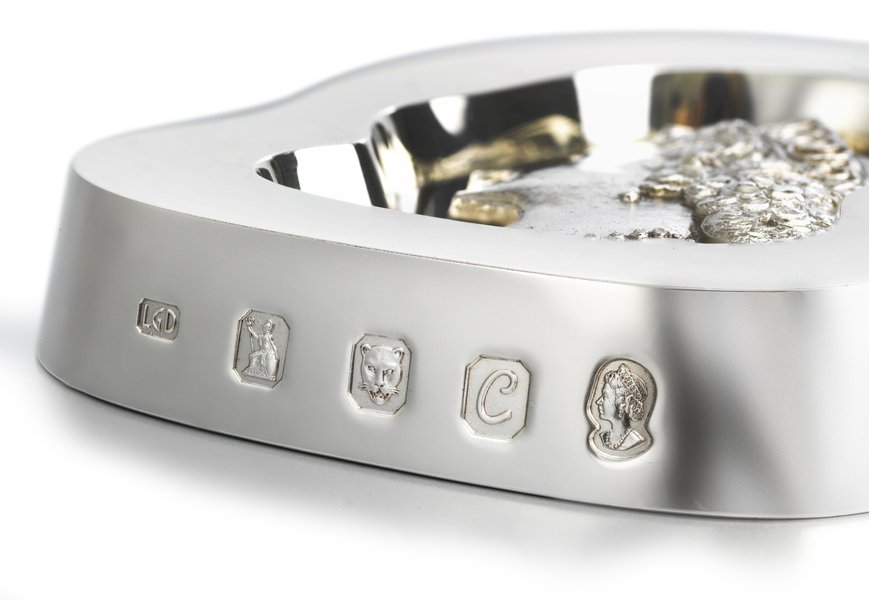 Made to mark the Golden Jubilee of HM Queen Elizabeth II, the bowl is chased with alternating panels of Galloway roses and undulating, parallel lines suggesting the seas around these islands. The engraved inscription reads: ‘My whole life, whether it be long or short, shall be devoted to your service’. The words are taken from a broadcast made by the then Princess Elizabeth on her 21st birthday, while on tour in South Africa with her family.

22ct gold, hand-raised and engraved. Commissioned by the Goldsmiths’ Company in 2002. 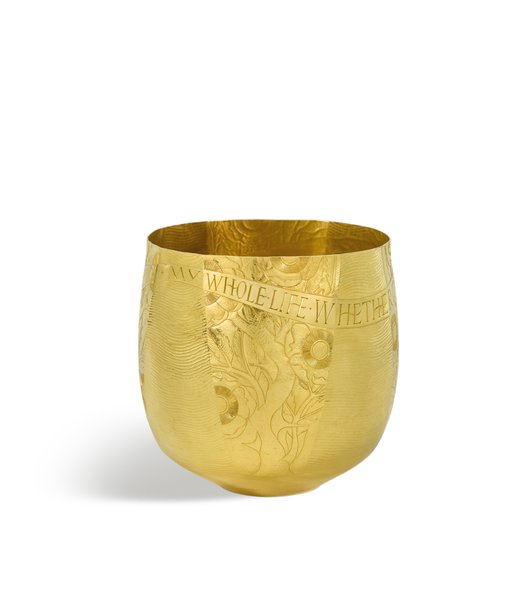 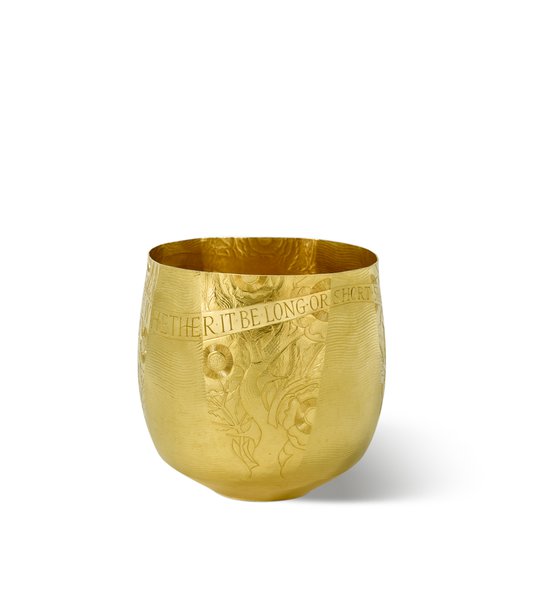 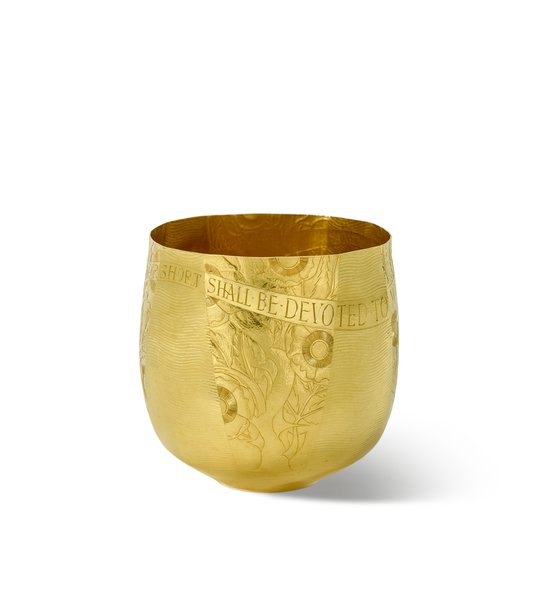 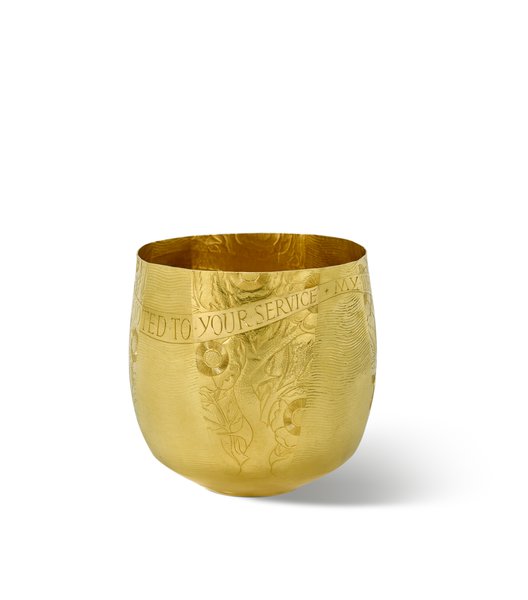 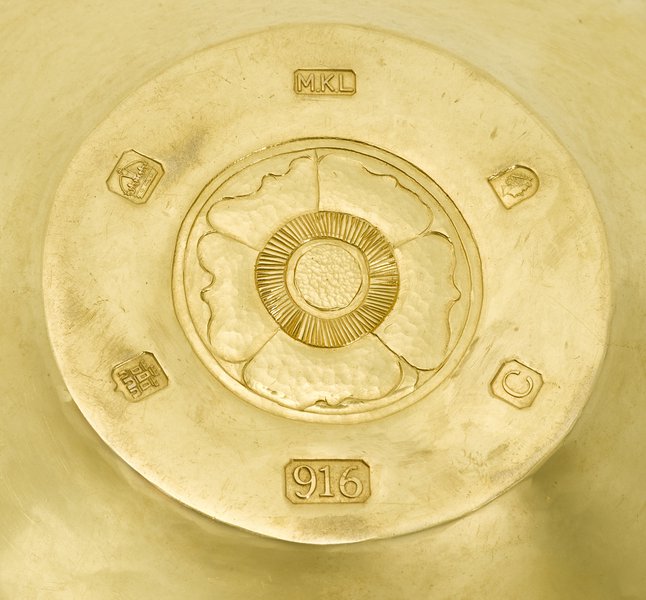 Commissioned to commemorate the Diamond Jubilee of the reign of HM Queen Elizabeth II, the dish is raised, beaten and sunk by hand. It has been hammered into an octagonal form, and its centre is chased with the Royal Crown and cypher. The basin is chased with water lines signifying the Thames, while each of the four applied panels features the flowers of the four nations that make up the United Kingdom. HM The Queen was shown this dish during a private audience at Buckingham Palace on 9 July 2015, as engraved on the back. 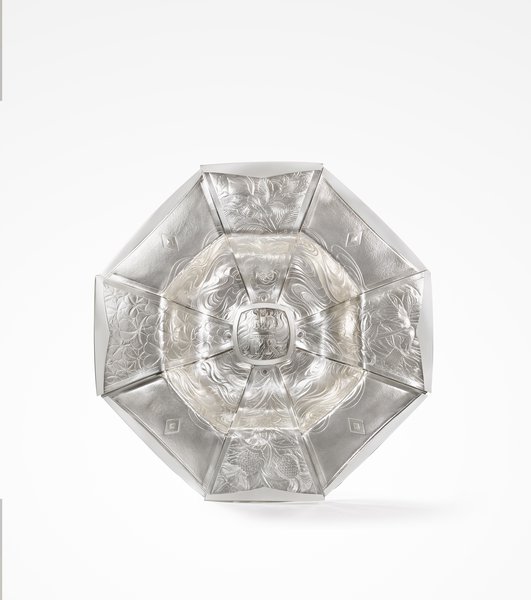 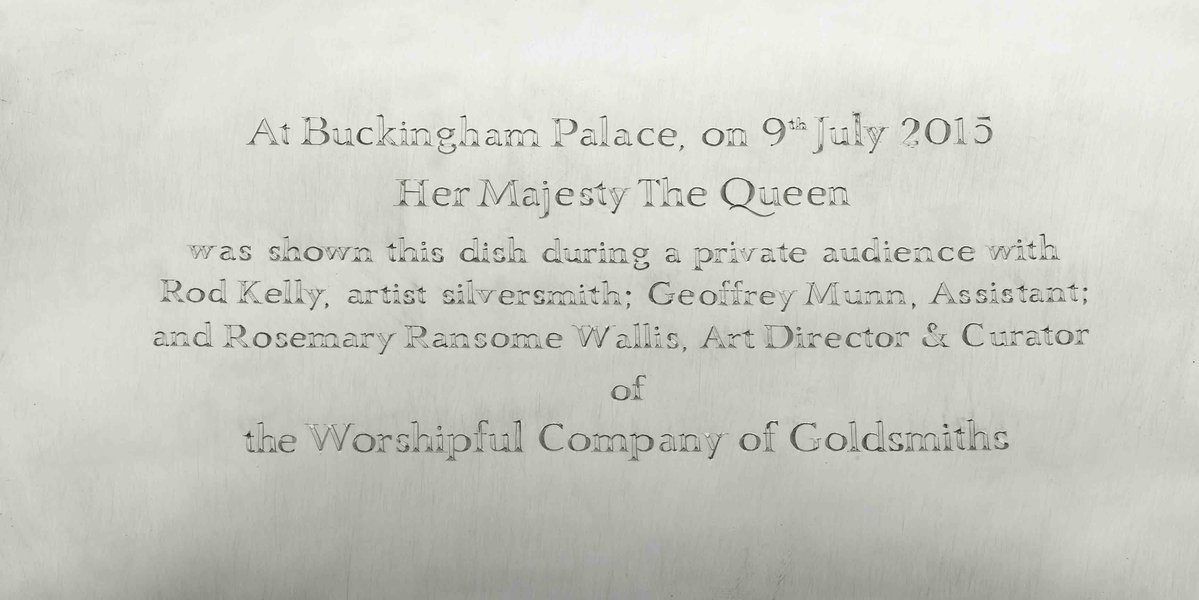 Melanie Eddy’s pair of geometric, faceted rings were acquired to celebrate the Queen’s Platinum Jubilee year in 2022. They are designed to be worn stacked together in a specific arrangement but are equally successful when worn separately. The larger ring, made of silver, is sculptural and oversized, with bold architectural polished planes. The smaller platinum ring is narrower, darker, and more delicate. The two white metals reflect light in different ways resulting in a subtle and pleasing contrast. 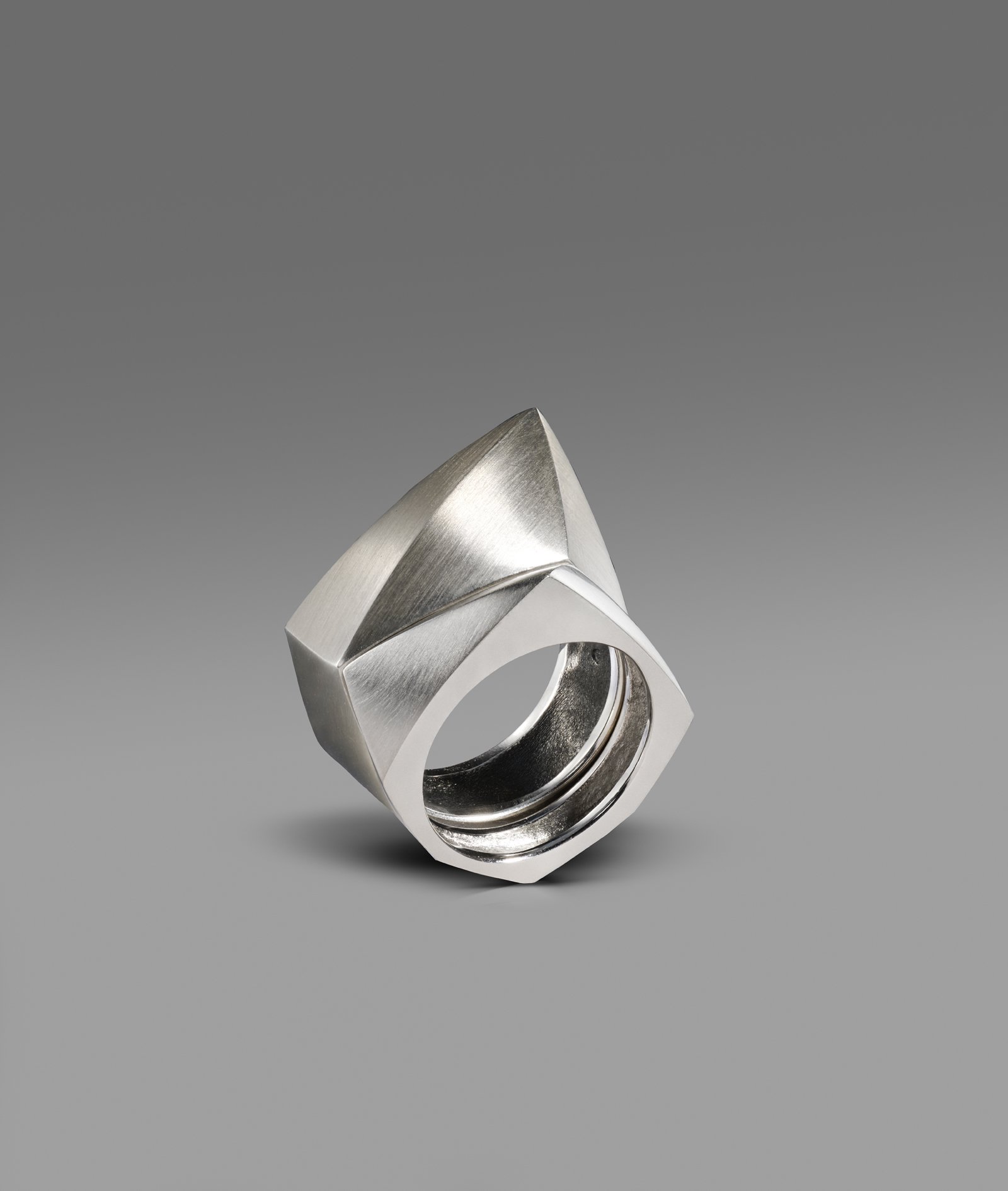