Multi award-winning father and son duo Philip and James Kydd of Philip Kydd Ltd, both Freeman of the Goldsmiths’ Company, are set to make the world’s most expensive piggy bank – an 18-carat gold handmade design costing £100,000 and is exclusively available to order from The Royal Mint, as part of a range of piggy banks called ‘Minty’®. We spoke to Philip, a silversmith for over 40 years and a member of the Goldsmiths’ Company since 1996, from his workshop in Barrow Gurney, near Bristol, about how Minty® was created and running a family business.

A thick mist has settled over the hills in the parish of Barrow Gurney in Somerset. Philip and his son are in their workshop, a single story converted farm building with 360-degree views of the countryside, working on their latest commission – a series of gold and sterling silver piggy banks called ‘Minty®’ for The Royal Mint, that has received a lot of press attention in recent weeks.

“I first met Sarah Dawkin from The Royal Mint about four years ago at a trade show. We got chatting about The Royal Mint’s ongoing vision to create beautifully crafted gifts for their customers as well as the coins they are already known for” says Philip. We have worked on several prototypes for other projects and then I got a call about a range of piggy banks The Royal Mint has designed called Minty® which, at the time, were being produced in ceramic. The Royal Mint wanted to expand the range to include gold and sterling silver. 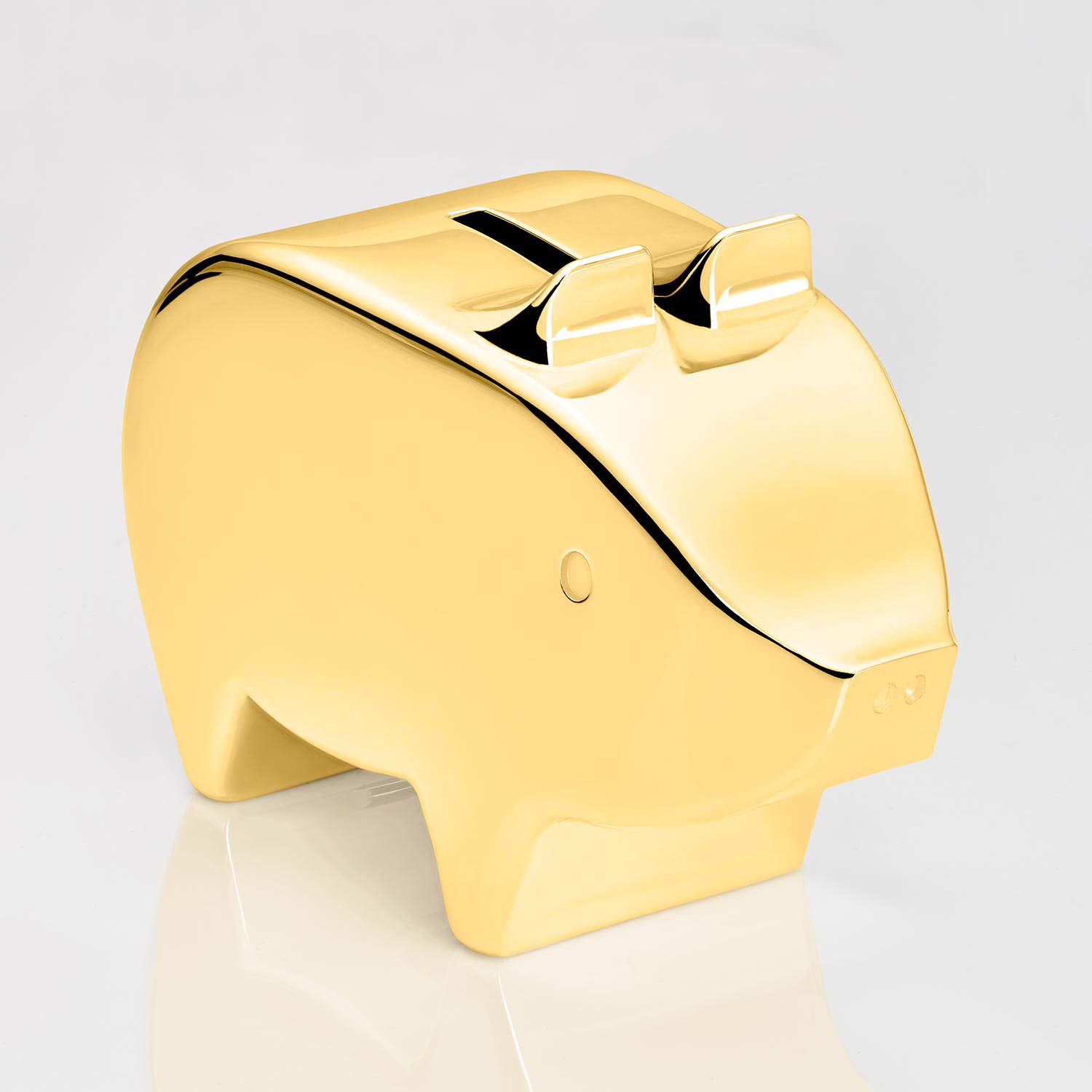 Philip and his son James, who have worked together since the beginning of James’ apprenticeship in 2013, were sent designs by The Royal Mint and started working on a prototype in base metal.

“We specialise in hand crafted silverware and jewellery and do a lot of commissions. With a commission like this one from The Royal Mint, where you are provided with a design, the challenge was getting the whole thing to come out like the original artist’s image – what we bring is the skills to realise their vision and design. We want to make sure the prototype is as true to the style and shape of the existing Minty® as possible.”

Philip and James made Minty® largely by hand, which always involves a high-degree of skill. This is not as easy as it sounds. “Metal likes to move when you work with it,” says Philip. “It takes a lot of skill and patience, and a bit of trial and error, to get the right result.” Although on this occasion Philip says that he and James managed to get the protype for Minty® ‘pretty spot on first time’.

They started the creative process with a conversation. “We will sit down together in the workshop over a cup of tea and look over the designs and we’ll come up with ideas and build on each other’s suggestions and just talk it through. We’ll then decide how we’re going to split the process between us. It varies with every piece: for Minty® I concentrated on the form – the body of the pig – and James concentrated on the details, like the snout, the bayonet fitting in the base and the tail.” 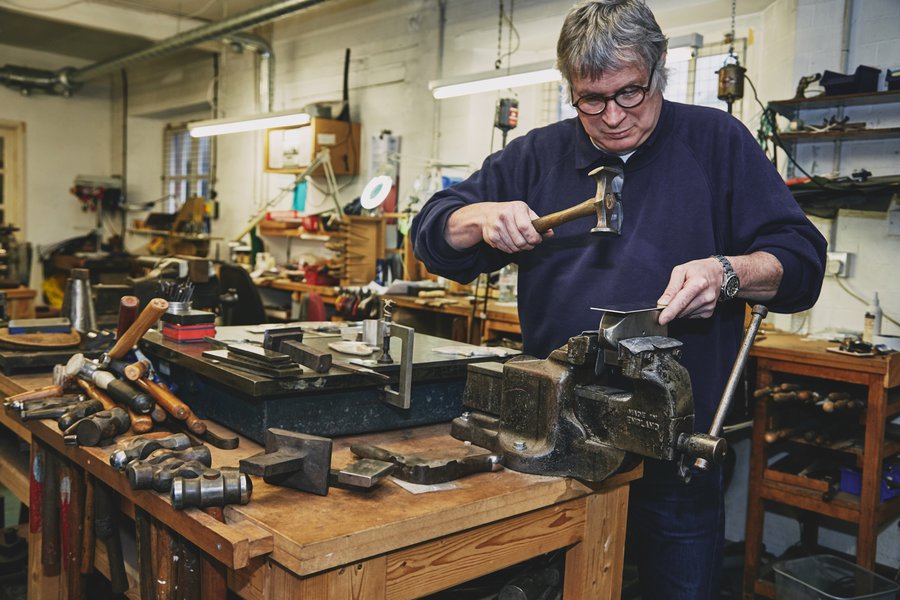 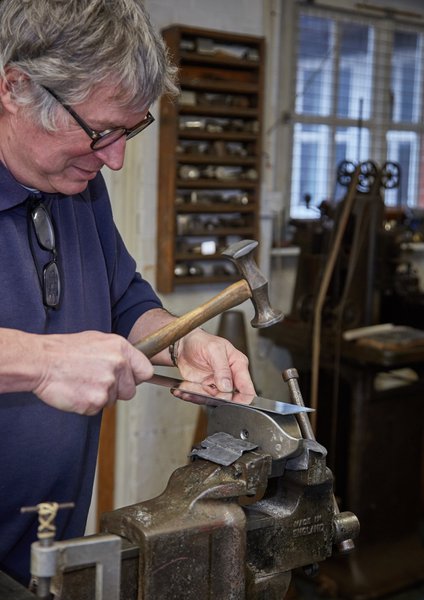 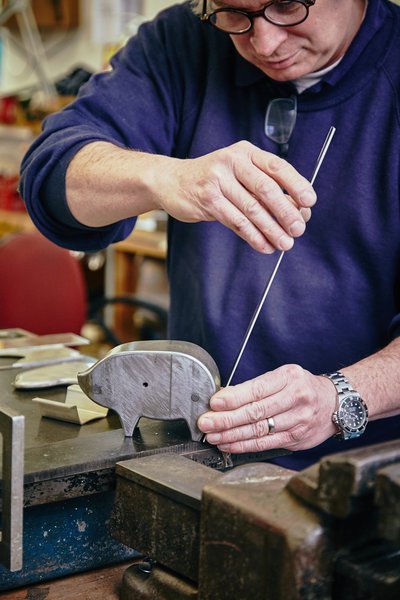 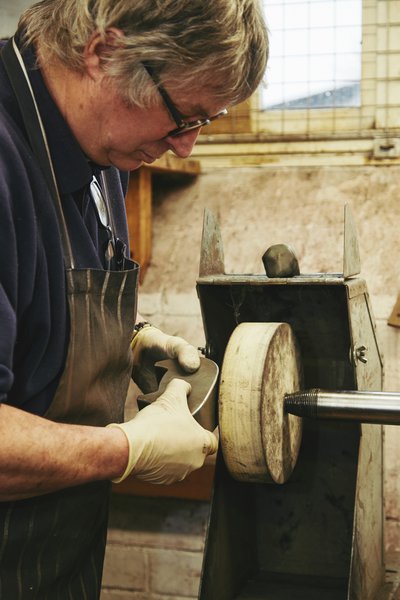 Creating a single sterling silver ‘Minty’® takes up to 40 hours, “It’s an awful lot of work – people don’t always appreciate the time that goes in. We even had to create two special tools to make the piece – Minty’s body consists of three pieces and two sides – one to blank-out the side profile and curl up the edges and another to produce the foot section. The rest was done by hand. Tools really help to speed things up. Without those special tools it would have taken us twice the time to create the piggy bank.” Philip says that making by hand is, in his view, the very best way to get the beautiful finish on Minty®. “You couldn’t 3D print an object like this and get that kind of finish on it because metal is granular.”

“My son and I were very much working as a team on this project and thoroughly enjoyed the challenges we faced to produce an end product we are sure customers will cherish,” Philip says. “It is wonderful to see something that was made by father and son being sold by The Royal Mint.”

Once finished, Minty® was sent to the Goldsmiths' Company Assay Office for hallmarking in London. The marks include the Royal Mint's Tower of London logo (pictured below). 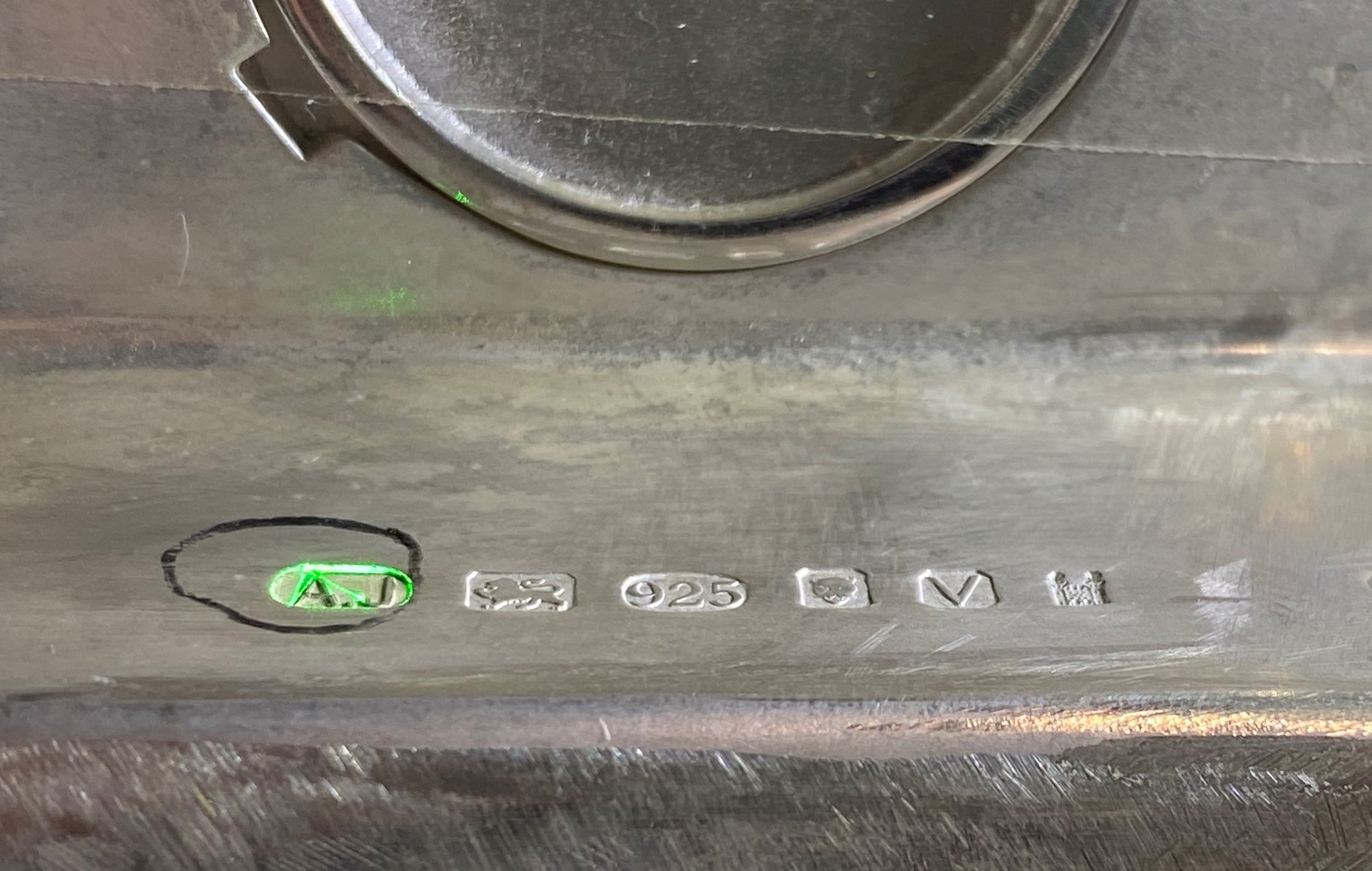 James started an apprenticeship under the Goldsmiths Company Apprenticeship Scheme in 2013 with his father as master and is also a Freeman of the Goldsmiths’ Company (since 2018). James has won multiple awards for his work at the annual Goldsmiths Craft & Design Council Awards, dubbed the jewellery ‘Oscars’, including a total of nine gold awards. He was also selected as one of Retail Jewellers’ ‘Rising Stars under 30’ in 2018.

On being a Goldsmith Philip says, “I’m very proud say that I am a member of the Company and I always promote the work they do. James trained under me on the Goldsmiths’ Company’s Apprenticeship Scheme. Studying the craft at the Goldsmiths’ Centre was key to his professional development – without that he wouldn’t have learnt as much as he did, it was invaluable.”

And the key to a good working relationship? “Mutual respect and understanding, nothing more complicated than that.”

Helen Cooper, Director of Gifting at The Royal Mint, comments: “The Royal Mint recently introduced a range of luxury gifts and jewellery inspired by our 1,100 years history. Each collection is created using traditional minting techniques or in partnership with leading UK artisans. We’re renowned for our gold and silver coins, so it was a natural step to create an equally exquisite piggy bank. This 18-carat gold Minty will be made to order, and hand crafted to ensure it is the most luxurious Piggy Bank in existence.”

To find out more about Minty® visit The Royal Mint’s website https://www.royalmint.com/minty