The Queen’s Platinum Jubilee brooch was made by award-winning British fine jewellery designer, David Marshall, and his team at their workshop in London’s iconic jewellery quarter, Hatton Garden. The piece, which represents the four nations, was commissioned by the Goldsmiths’ Company as a gift to mark Her Majesty’s Platinum Jubilee.

The David Marshall design was handpicked by the Queen from a selection of designs submitted by a shortlist of highly acclaimed UK jewellery makers. The brooch – made of 18 carat white gold; platinum; 97 round brilliant cut diamonds (2.50 carat); and 7 fancy cut diamonds (0.40 carat) – was inspired by the four nations of the United Kingdom, England, Scotland, Wales and Northern Ireland, represented by four diamond set swirls and the national flowers: the rose, the thistle, the daffodil and the shamrock. Seven diamond set bands represent the seven decades of the Queen’s reign. Buckingham Palace proposed the addition of the lily of the valley given the significance of the flower in The Queen’s Coronation bouquet.

The reverse of the brooch is laser hallmarked and includes the very special commemorative Platinum Jubilee mark, designed by Fattorini Ltd, and the Leopard’s Head mark – the town mark, which shows that the piece was hallmarked in London. The marks were applied by the Goldsmiths’ Company Assay Office, which has been hallmarking on the same site in London for nearly 700 years. 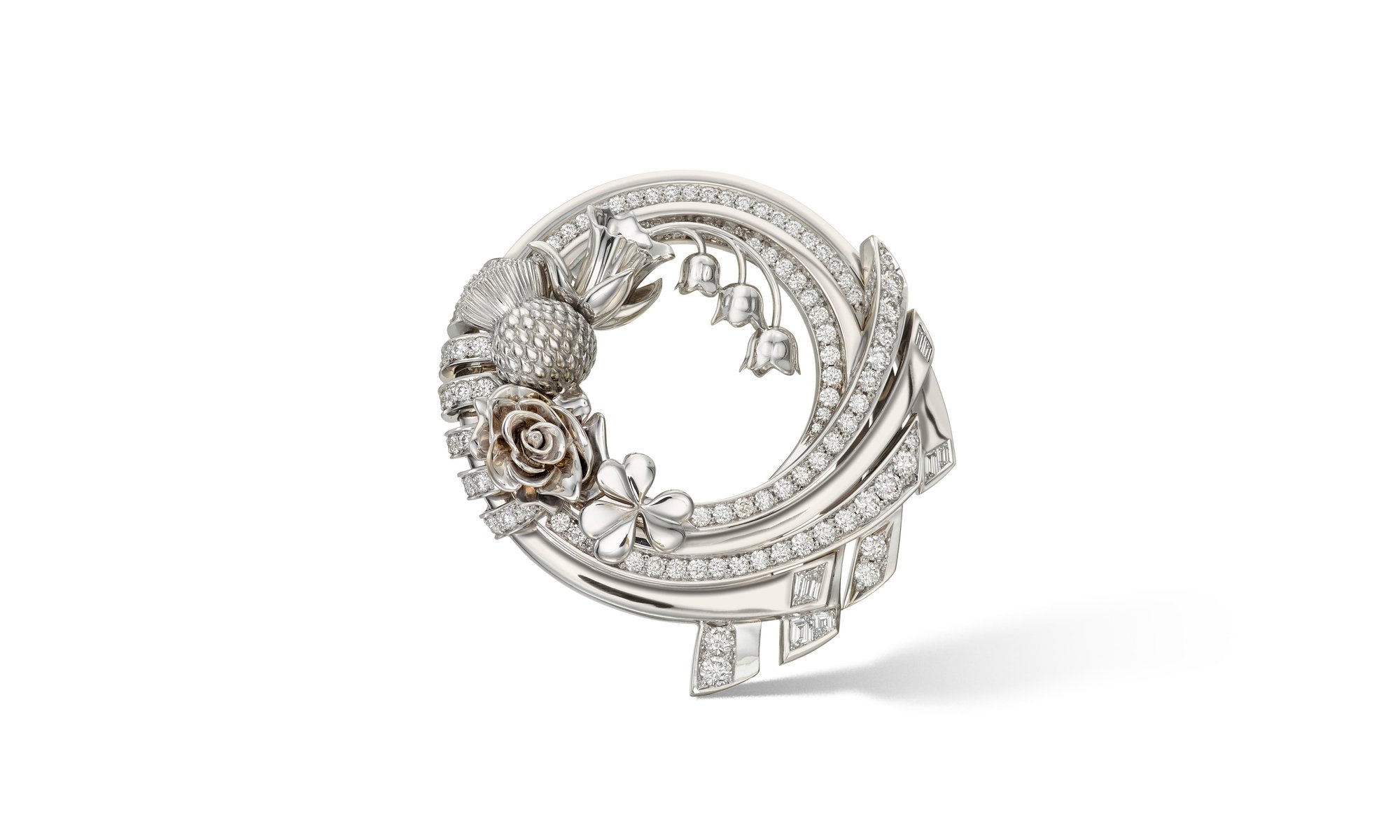 The brooch was made by a team of highly experienced specialists at David Marshall’s state of the art workshops, The London Art Works, in Hatton Garden, using a combination of traditional and contemporary techniques, from the lost wax casting process to computer aided design (CAD). The team included the designer Denise Gibbs; CAD designer Simon Wolfberg, diamond mounters Matt Martin and Madeline Rowe; and diamond setters Craig Michel and Mark Moutia.

David Marshall says: “We are beyond excited to present our Platinum Jubilee brooch. It was made in our London workshop by myself and my talented team who all feel highly privileged and treasure the knowledge that they’ve had a part in creating this special piece for The Queen.”

A duplicate brooch (marked differently to maintain the distinction between the two brooches) was made for the Goldsmiths’ Company Collection and will be included in an exhibition for Goldsmiths’ Fair in Goldsmiths’ Hall in the autumn. It will also be featured in the accompanying online exhibition on the Goldsmiths’ Fair website so that it can be shared with a wider public, giving people around the world an opportunity to see this exquisite treasure.