The Goldsmiths' Company and World War One

As we approach the centenary anniversary of Armistice Day, we have looked back through the Company minutes from the period of the First World War. The Court Records over the years detail the names of those injured, missing and killed in action and, in the same neat hand, the poignant detail that work increased in the Assay Office in 1916 as large numbers of gold wedding rings were brought to be hallmarked.

At a special Court meeting on 3 September 1914, the Clerk, Sir Walter Prideaux, reported that nearly half of the staff had already gone to serve within the armed services or as special constables.

80 of the staff were employed in the Navy office, with 20 serving the country either in the territorials or in some other capacity. The Company’s butler had previously been a member of the King’s Royal Rifle Corps and rejoined as war broke out.

It was also reported that others wished to go. Those who requested to leave were told that their jobs would be held open for them and they would continue to be paid (a condition that had to be revised as the years passed).

At the same meeting it was reported that there was distress in Gold and Silver trades due to unemployment due to the war.

'The Clerk reported with reference to the usual zeppelin air raids, that the property of the Company had - with very slight exception - escaped damage, but that a fragment of shell from one of the anti-air craft guns had fallen through the sky-light of the Hall and lodged on the marble corridor near the Livery Tea Room.' 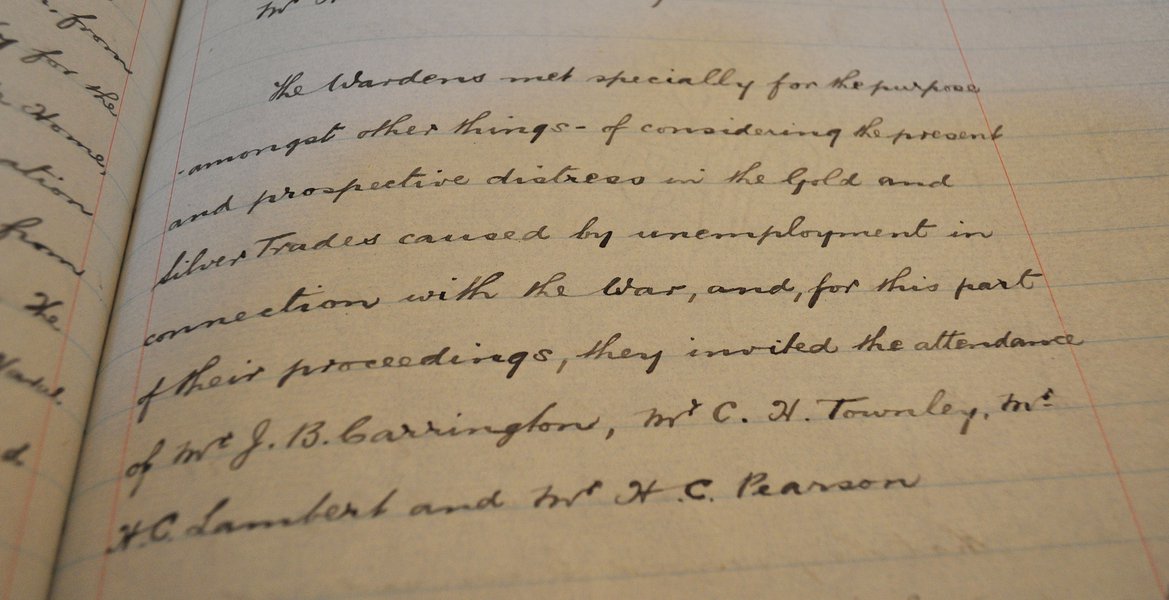 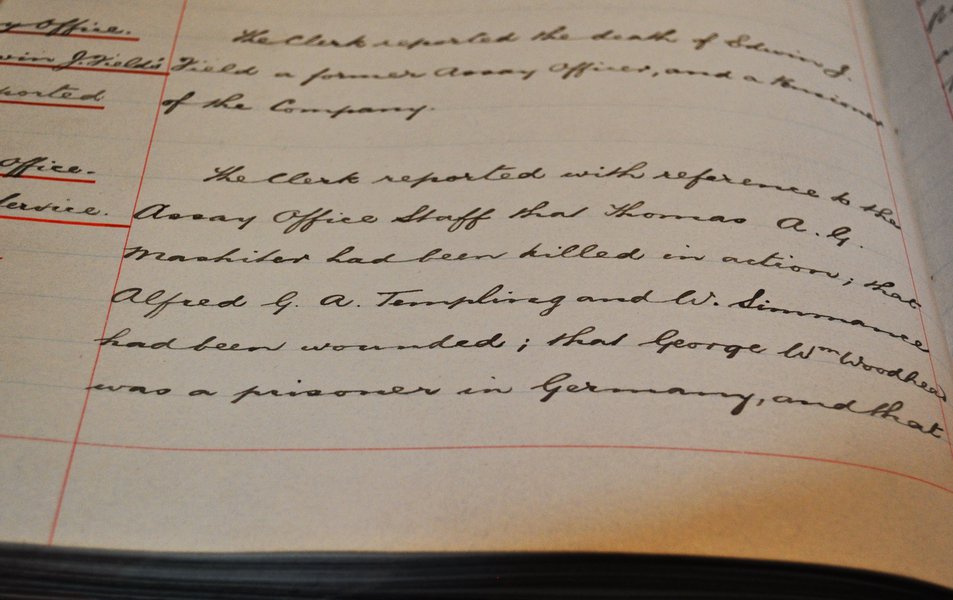 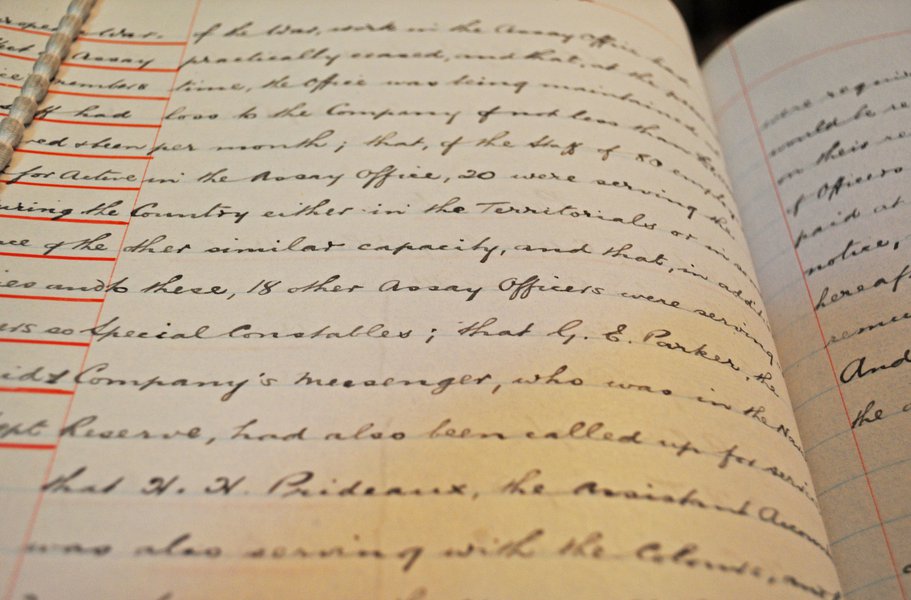 The minutes of 3 October 1917 record that one member of the Assay Office staff was reported to have been killed in action. Updates on other former company members are recorded, including one staff member being held as a prisoner of war in Germany.

On 17 October 1917, a grant of £500 was made to the joint committee of the British Red Cross and the order of St John of Jerusalem. The minutes also record that the wardens entertained a party of wounded soldiers at Goldsmiths’ Hall on 6 November 1918.

A permanent memorial at Goldsmiths' Hall was made by Gawthorp & Sons Ltd and was unveiled on Monday 19 March 1923.

The memorial records the names of those members of staff who left to serve their country in World War One, including two who received medals on active service and the five who were killed.

Sir Walter Prideaux's son, Humphrey Hollond Prideaux, enroled at St Paul's Churchyard on 28 August 1914. Prideaux received the Distinguished Service Order and the Miltary Cross, serving in France and Belgium between 1915 and 1919. He also won the Belgian Cross du Guerre and was mentioned three times in dispatches. After the War, Humphrey became a member of staff until 1945.

The other medal winner recorded of the memorial is F.C.King, a marker in the Assay Office, who began working for the Company in 1912, aged 15. King served as a mechanic in the Royal Flying Corps and was awarded the Military Medal for gallantry in action under fire.

Those listed on the memorial brought close relatives to the ceremony, with a lunch at the Hall afterwards. Those present included the son and grandsons of Horace Skinner, a Company porter and one of those who had 'passed out of the sight of men' after he died of his wounds in July 1918.

With special thanks to our work experience pupil Sam Green, who searched the Company archives. Text on the war memorial adapted from Sophia Tobin’s article for the 2016 Review. 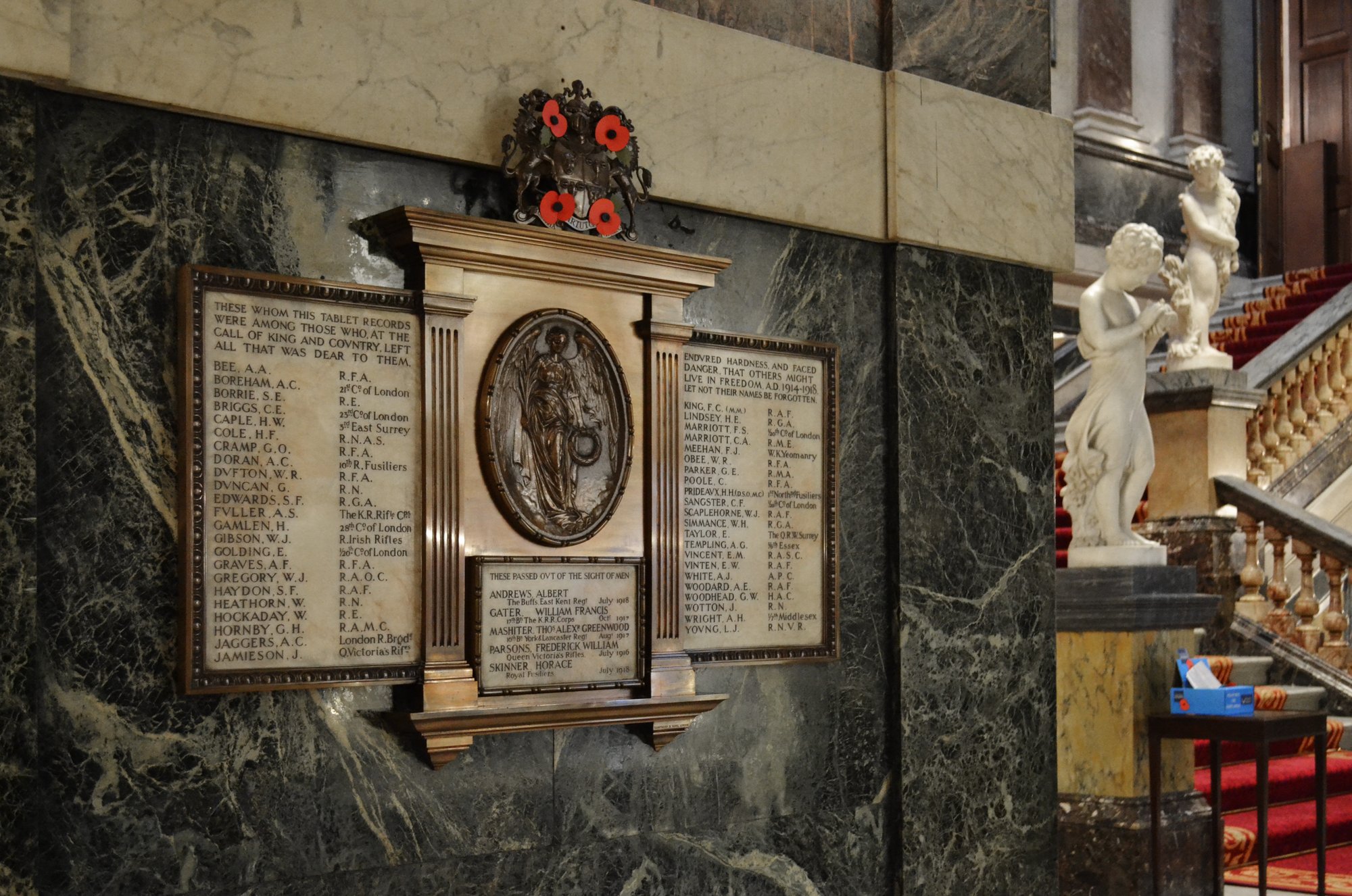 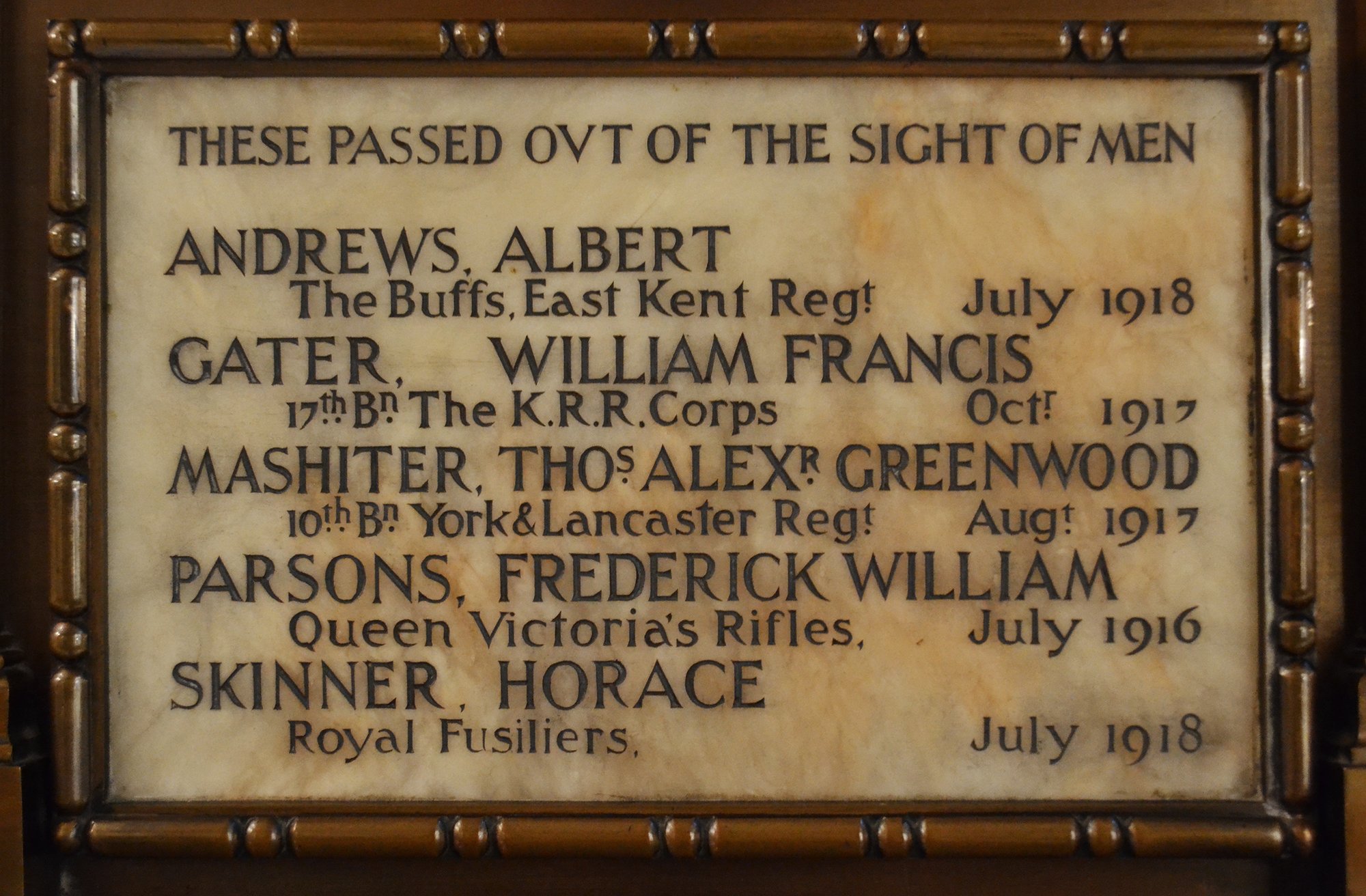 Staff Members who had 'passed out of the sight of men'