The existing Goldsmiths’ Hall was designed by Philip Hardwick and officially opened in 1835; it is the third Goldsmiths’ Hall on the site.  Built above Roman remains, it is a fine example of a mid-19th century Livery Hall and is designated a Scheduled Monument.

This high level of statutory protection required a well informed and carefully reasoned approach to the recent redecoration of the Livery Hall. Research and analysis informed proposals that were subsequently executed over two summer recesses by a team of skilled craftsmen and decorators.

The initial vision for the Livery Hall, illustrated in a drawing by Hardwick, had a rather different architectural treatment to that which was built.

The Livery Hall as it was actually built is illustrated in a contemporary watercolour currently hanging in the Binding Room. This shows a stone coloured ceiling with some picking out in gold leaf and the impressive scagliola columns of sienna colour above the plinth painted to imitate granite. The curtains and hangings to the niche are of a red, not dissimilar to that which hangs in the Livery Hall today. 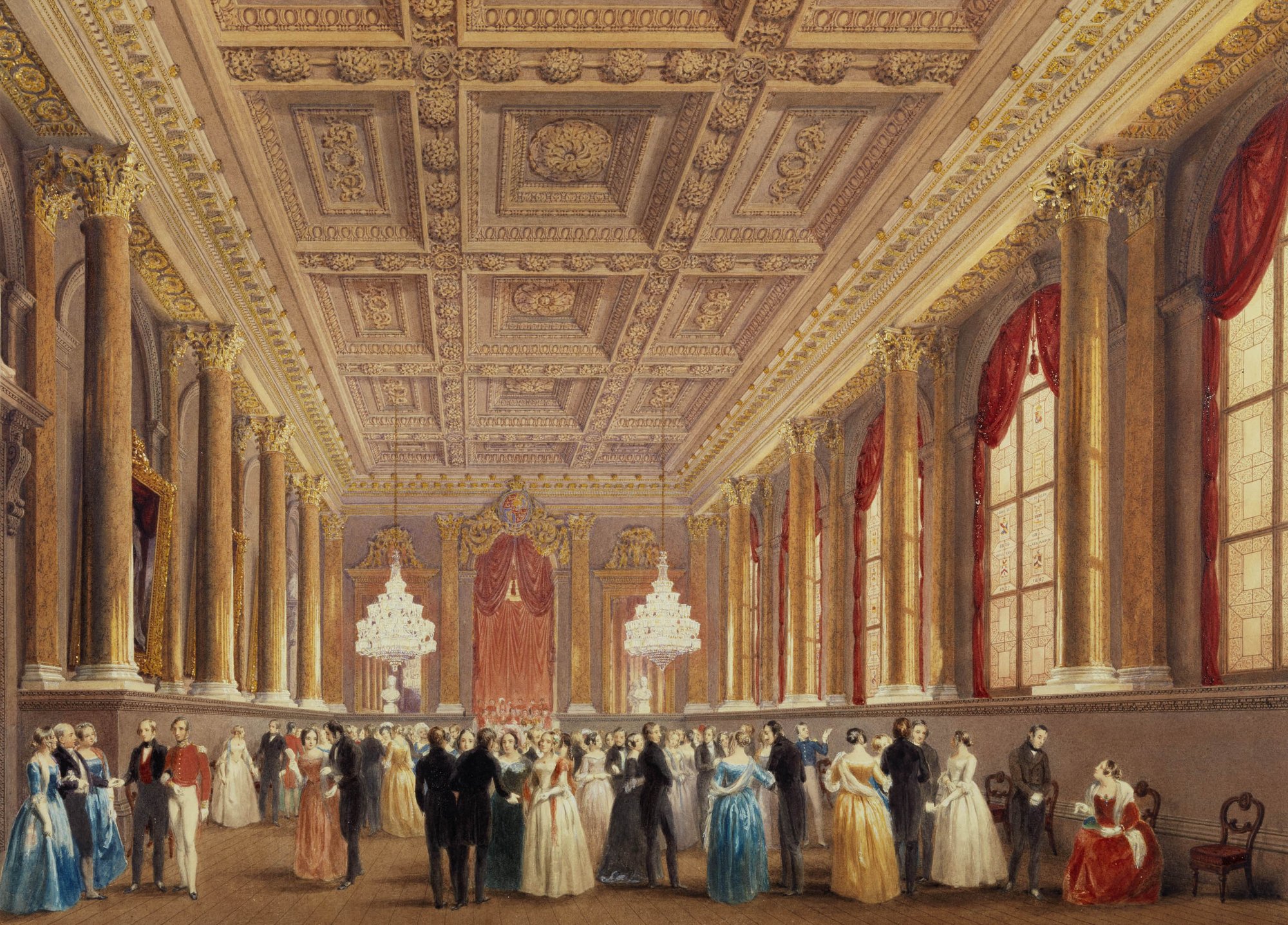 A ball in the Livery Hall, c.1840, watercolour, by Arthur Melville

These mid-19th century schemes were over-painted in 1892 by George Aitchison. Aitchison’s rich polychromatic ceiling and dark colouring to column bases and capitals imprinted a particular character which has influenced the appearance of the Hall ever since, albeit a very different one to Hardwick’s vision.

The Aitchison scheme was modified by J.G. Crace in 1909.  Crace changed the arcade fields from salmon pink to a deeper red and applied gold bands to the arcade pilasters and spandrels. This scheme was modified again in the 1960s, following advice from Sir Albert Richardson, when the lettered frieze was removed and in the late 1980s under the direction of Donald Insall. The Insall scheme used a large amount of ochre colour. 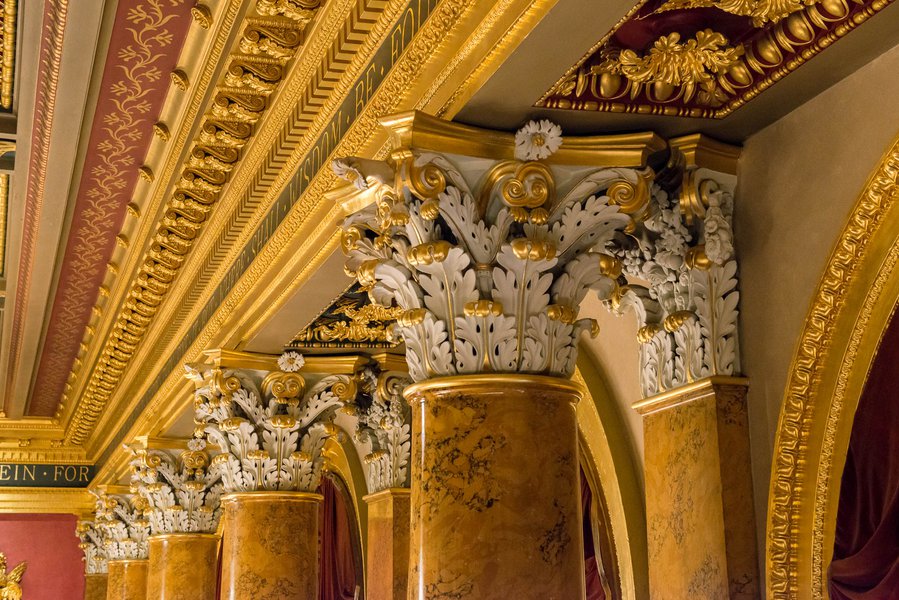 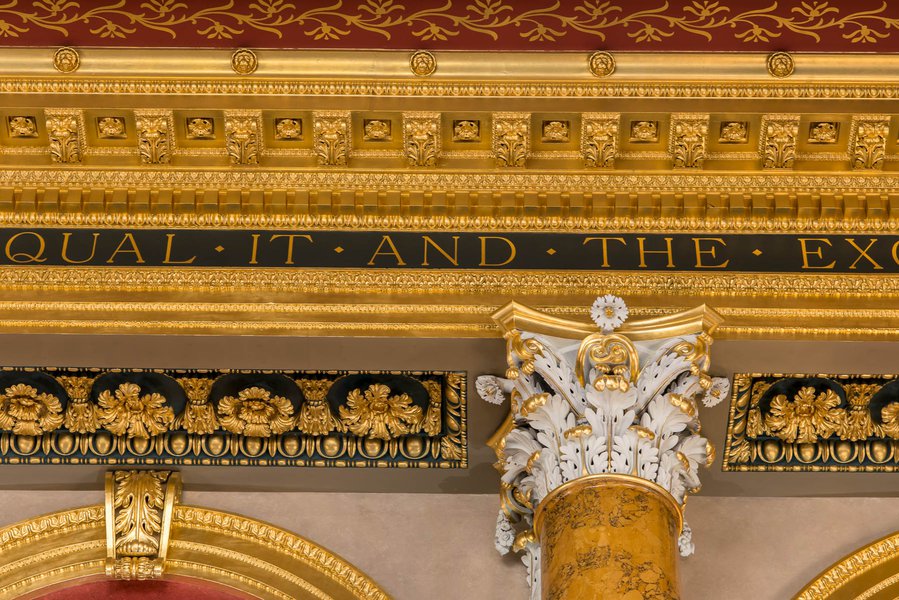 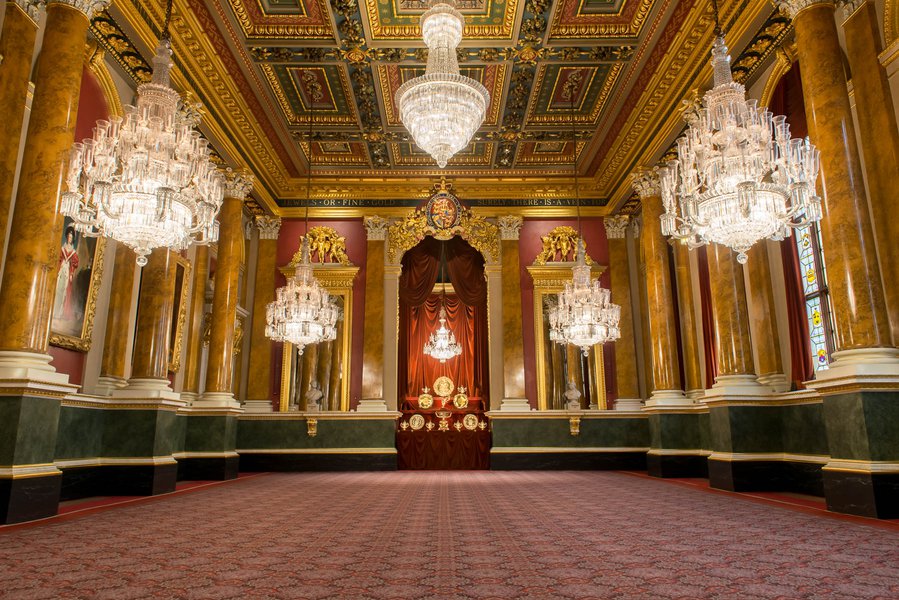 The new scheme was devised to work with the Aitchison ceiling, which was taken as fixed, and to bring about an improved reading of the architectural elements as envisaged by Hardwick. Above the plinth the scagliola columns were re-polished and are punctuated top and bottom by capitals and bases in stone white with gilded highlights similar to Hardwick’s original scheme. The red fields were repainted and the lettered frieze was reinstated. Subtle changes to the pilasters’ colour and removal of their additional gilt borders has let the scagliola columns come to the fore.

One of the challenges in composing the new scheme was how to be sympathetic to Hardwick’s idea of showing off the scagliola columns given the richly decorated ceiling. The visual strength of the plinth, providing a base for the columns, was seen to be very important. Changing the plinth colour from ochre to a green granite has given definition to this horizontal element, reflecting Hardwick’s vision and creating a relationship with the ceiling. This green was also used in the reinstatement of the lettered frieze. By emphasising the horizontals of the plinth and frieze, previously lost in the homogenous ochre scheme, the architectural framework for the columns has been returned to the composition of the Livery Hall.

The project also presented the opportunity to make technological improvements. A new lighting system has been introduced which illuminates the full length portraits, niche buffet and gallery. At the top of the central chandelier a support structure and additional row of glass drops, fabricated by the Chair of the House Committee, now accommodates four remote controlled spotlights.

The heating system has been updated with new radiators set below bespoke bronze grilles, allowing removal of the raised floor between the column bays. The external grilles have been fitted with electrically operated louvres so they can provide natural ventilation. The sound system has been modernised, and now incorporates a hearing loop.

Whilst the scope and impact of the works carried out might not be obvious at first glance, the harmonious end result draws on Hardwick’s ideas and modifies them to complement the Aitchison celling, establishing an appropriate grandeur for the Livery Hall.