The Hall is the third on this site, the Goldsmiths' Company being located here since 1339. Little is known of the first Hall but the second was erected in 1634-6 and restored after the Great Fire of 1666. It lasted for almost two centuries, but was eventually demolished in the late 1820s. The present Hall, by Philip Hardwick, remains much as he designed it, although there have been changes to the decorative schemes and the use of rooms. The Hall narrowly escaped complete destruction when in 1941 a bomb exploded inside the south-west corner. Faithfully restored on the exterior after the War and internally modified, it retains much of the charm of an urban palazzo. A major refurbishment which was completed in 1990 has further adapted this great building for the 21st century.

In 1327 the Company received its first royal charter, giving it the right to enforce good authority, the standards within the trade and emphasising its standing over provincial goldsmiths. This marked the beginning of the Company’s formal existence as a craft guild, with St. Dunstan as its patron saint.

During the medieval period, the whole Company met at least three times a year when the ordinances were read aloud and decisions by the ratified. Such questions as new leases, choice of almsmen, election of liverymen and trade disputes were dealt with on these occasions.

At this point the Goldsmiths decided they should have a headquarters. The chosen property lay near the ‘Goldsmithery’ or goldsmiths’ area, at the north end of Foster Lane in the parish of St. John Zachary. In 1339, 19 goldsmiths bought it for the use of the Goldsmiths' Company. Though extended in area, this is the identical site on which Goldsmiths’ Hall stands today. No other Company can claim a longer or earlier tenure.

Two renters were annually appointed to collect the rents and keep an eye on the condition of various properties. These were men of standing on the Livery but unlike other companies they were not Wardens. There were four Auditors, all past Wardens, also a Clerk and a Beadle. The Wardens were chosen at a common assembly in April and took office on 19th May, the feast of St. Dunstan, the Company’s patron saint. That day would begin with a solemn procession to church and end with a feast.

According to the Company’s Accounts we can tell that by now the Hall contained a parlour, great hall, chapel, chamber, granary, armoury and cellars with courtyard and garden.

In 1530, the Company went to great trouble and expense to import a specially woven tapestry, from Flanders, which depicted the life of St Dunstan, the patron saint of English goldsmiths. Of vast size, the tapestry was hung around the walls of the Livery Hall. Sadly, with the advent of the Reformation, the tapestry disappeared, as did a jewel-encrusted silver-gilt effigy of St Dunstan, which at some unknown date had been erected over the screen in the Livery Hall.

By the early seventeenth century, it had become obvious that the Hall was too small for the Company’s needs. A second Hall was erected on the site of the original merchant’s house, incorporating a further 10 shops, between 1634 and 36. The Palladian red-bricked building was the work of Nicholas Stone, the King’s Mason, with advice from Inigo Jones, the King’s Surveyor. The Company had to pay for a licence for rebuilding and, when the stone was delivered it was immediately ‘detained for the King’s use’ and a further quantity had to be purchased. The Company was forced to borrow heavily.

The new Hall from the 1630s was gutted by the Great Fire of 1666, leaving only the walls standing. The Company’s treasures and records were saved by Sir Charles Doe, an assistant, who commandeered a cart and took them to safety to a house in Edmonton. 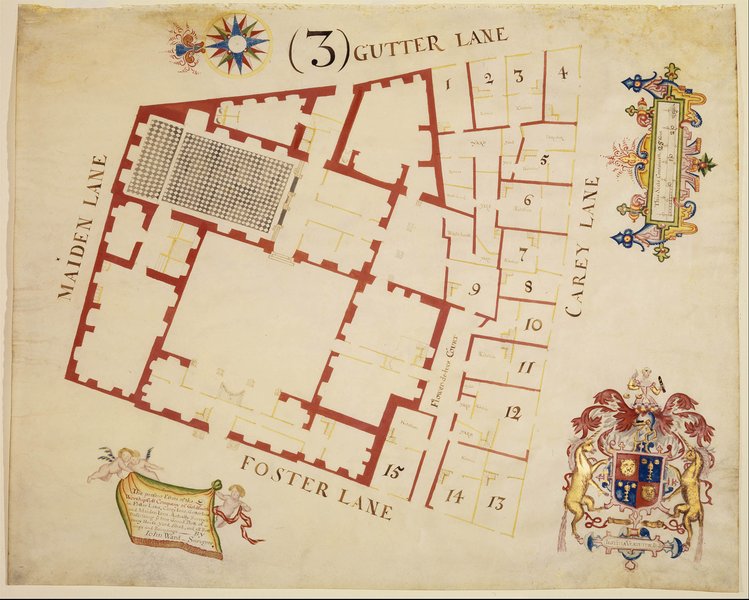 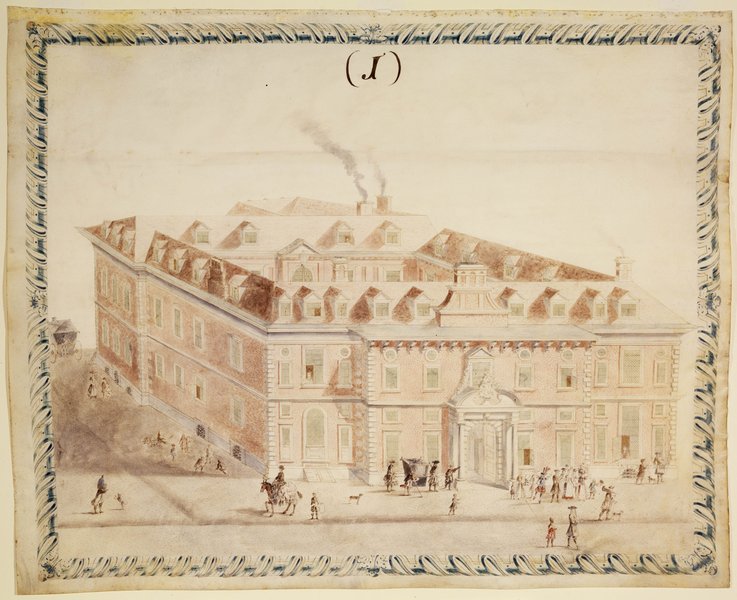 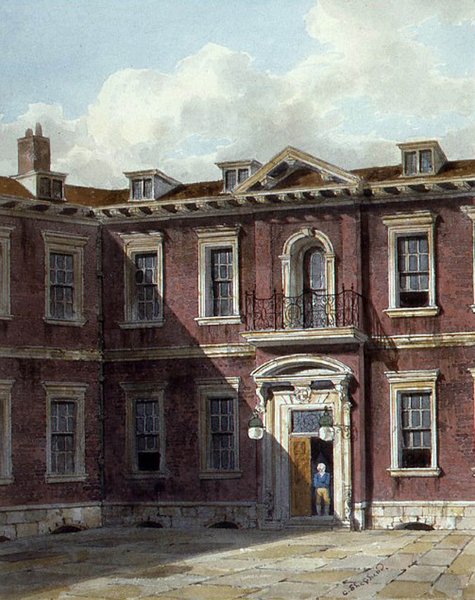 The restoration of the Hall was completed by Edward Jerman in 1669, although a further fire in the Assay Office destroyed the southwest corner of the new building in 1681.

In 1814, Brayley described the Hall as being of ‘fine red brick, and surrounded a small court, paved; the front being ornamented with stone corners wrought in rustic and a large arched entrance, which exhibited a high pediment, supported on Doric columns, and open at the top, to give room for a shield of the Company’s arms.‘

The Company had been proud that its wartime economies from the Napoleonic Wars did not hinder its charitable activities, but the upkeep of the Hall had certainly suffered. In the early 19th century some parts of the building even had to be shored up with scaffolding.

In 1829 the existing Hall, which dated from the 17th century, was demolished, and construction began on a new structure. It was designed by Philip Hardwick, the Company’s surveyor, and was opened with a grand banquet in July 1835, attended by distinguished guests including the Duke of Wellington. The principal rooms were praised in contemporary accounts:

“The rooms are marked by an air palatial grandeur not exceeded by that of any other piece of interior architecture in the metropolis."

Marble statues by Samuel Nixon of children representing the Four Seasons stand on pedestals on the lower flight. The whole staircase Hall is sheathed in marble of ten different colours to give it a restrained grandeur.

A gilded wooden figure of St Dunstan, originally made for the Company’s state barge of 1744, is situated opposite the long case clock on the first floor landing.

Above the huge oak doorway on the first floor are the carved and painted arms of six major benefactors, whose legacies have been used for a wide variety of charitable purposes, particularly for the poor in London. 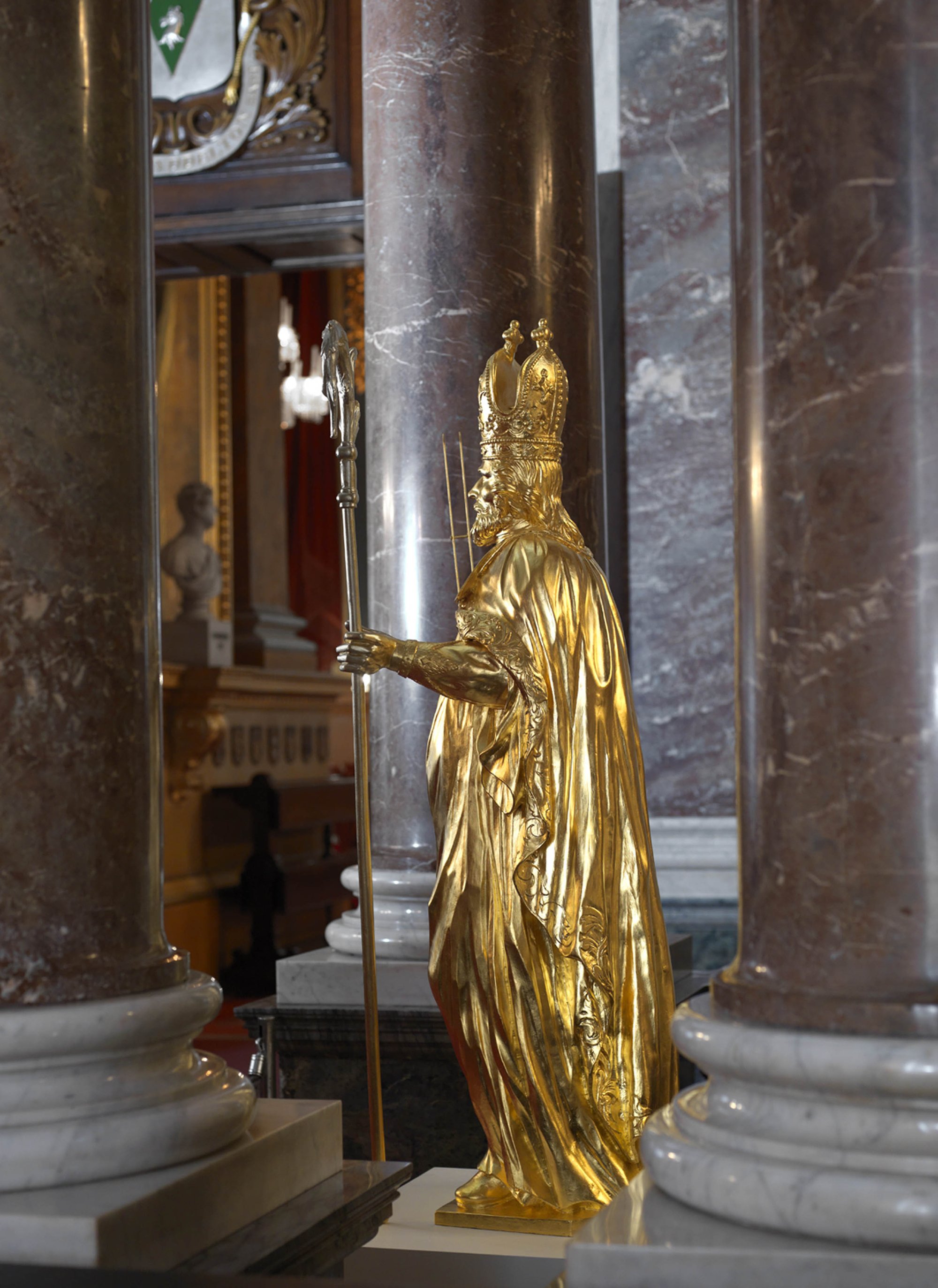 This magnificently proportioned room with Corinthian columns of scagliola has a richly decorated moulded ceiling in gold leaf. The draped embrasure in the north wall was designed as a buffet to display the Company's ceremonial plate. Above the arch of the embrasure appear the arms of William IV. To either side, in front of large mirrors, are marble busts of George III and George IV by Sir Francis Chantrey.

The four matching chandeliers of English glass, supplied by Perry and Co. in 1835, now electrified internally, each hold forty-eight candles. 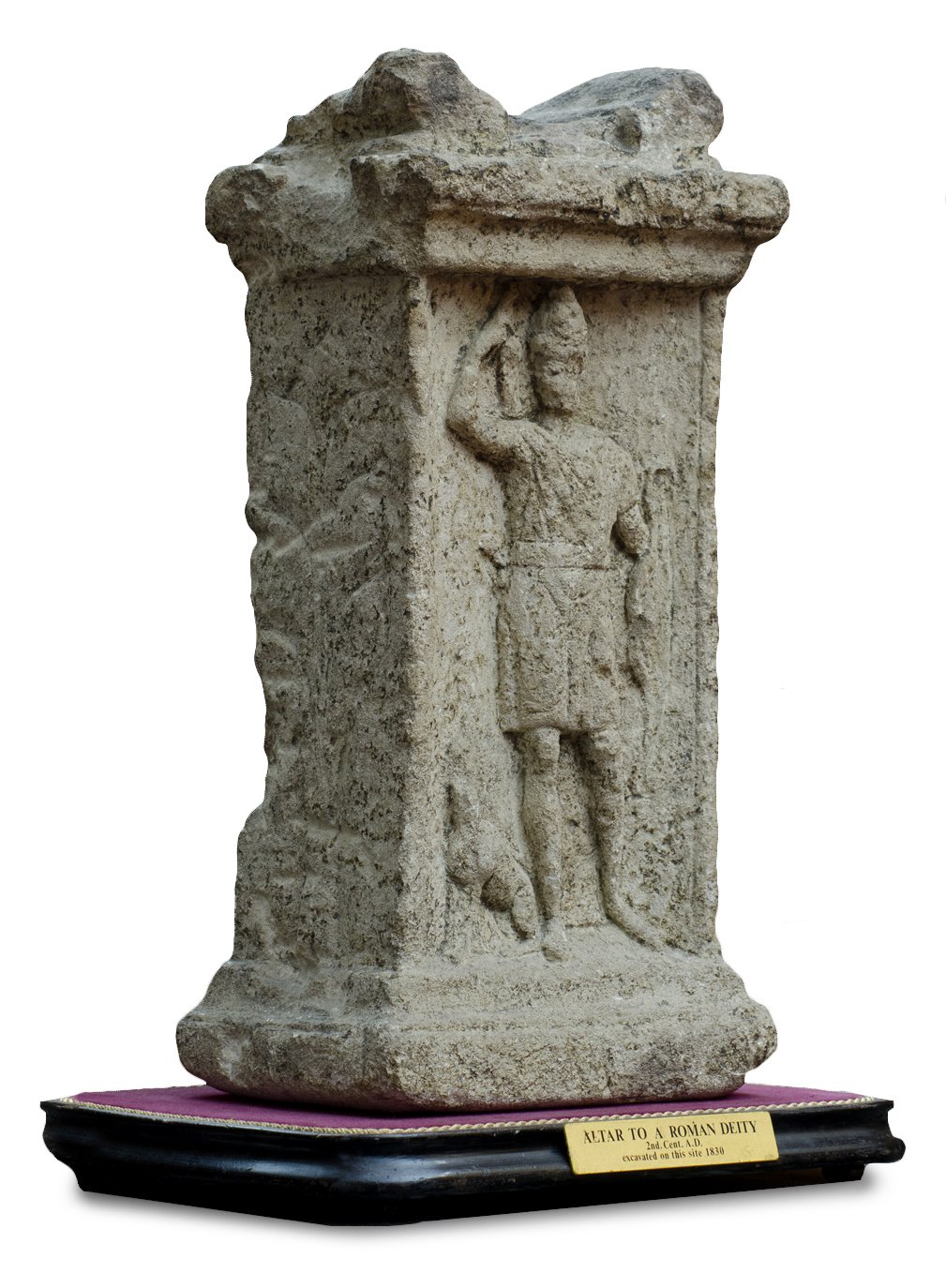 This distinguished room contains eighteenth-century features transposed from the previous hall, including the oak panelling, the gold and silver cornice, and the marble chimneypiece.

In the north end of the room is a Roman stone altar, dating from the second century AD, found in 1830 by workmen digging the foundations for the present hall. Recent scholarship has identified the figure with the London Hunter-God. 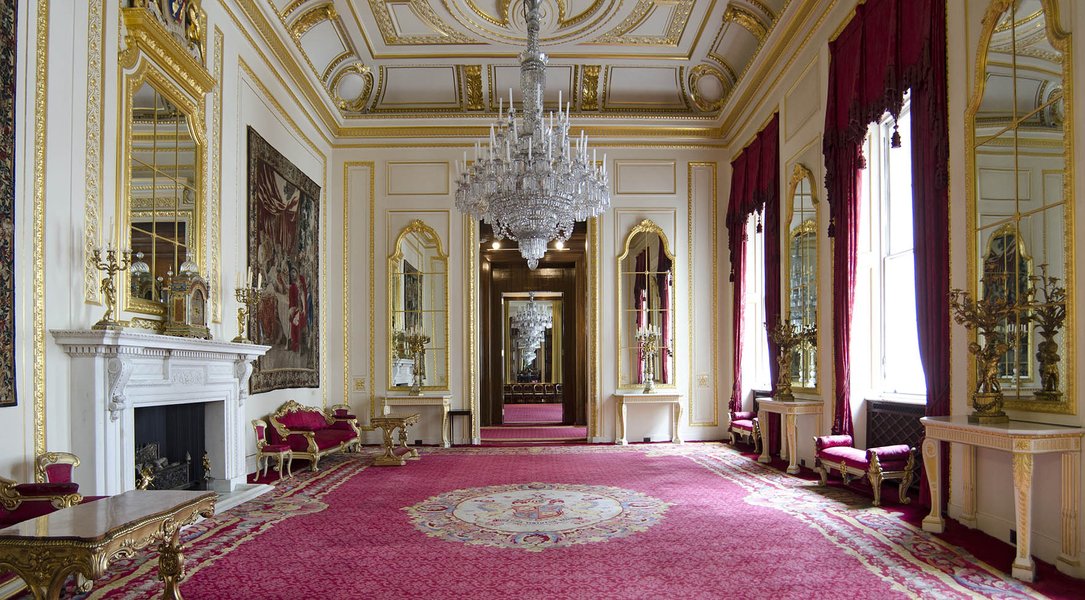 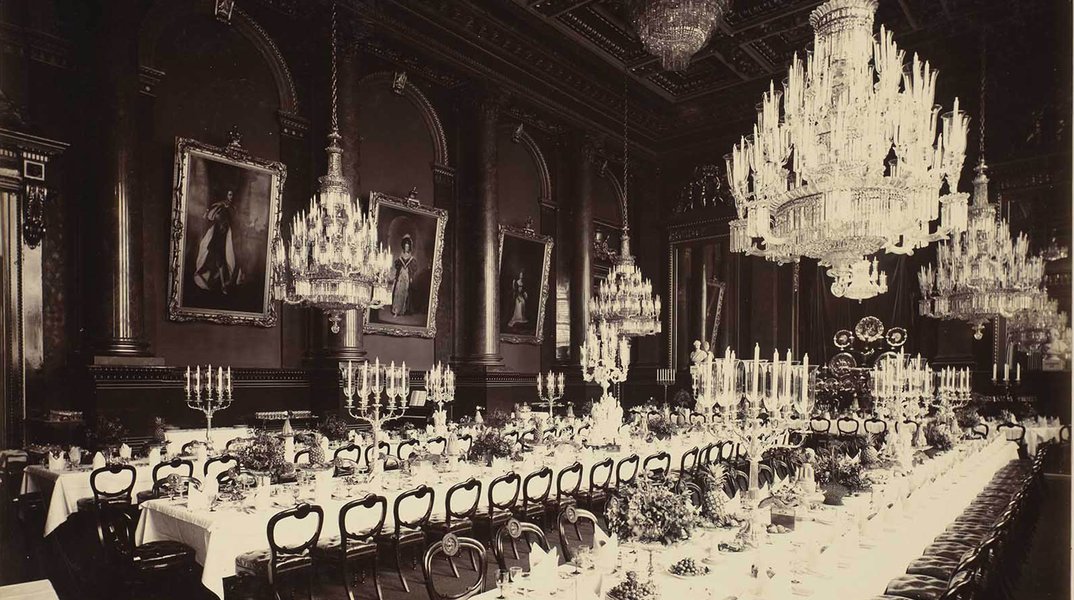 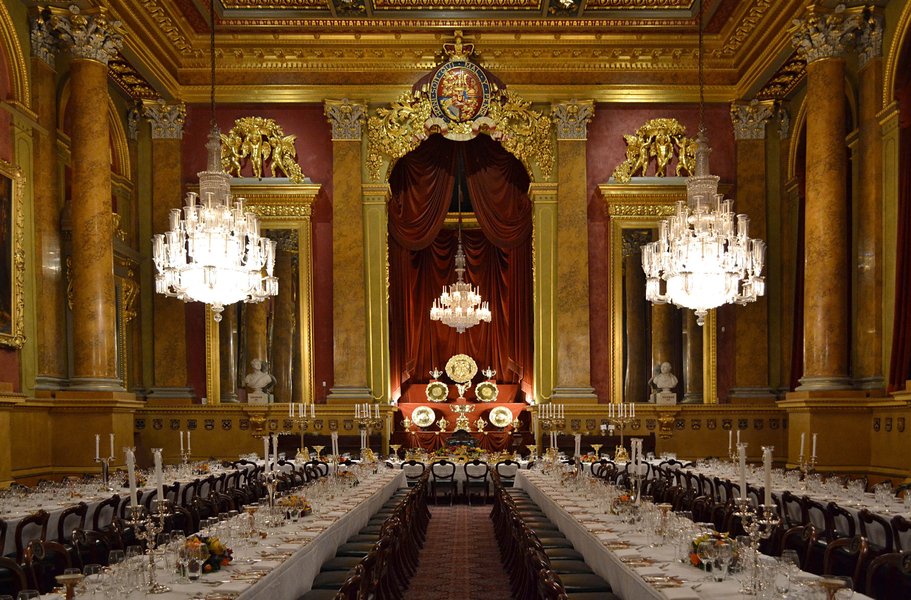 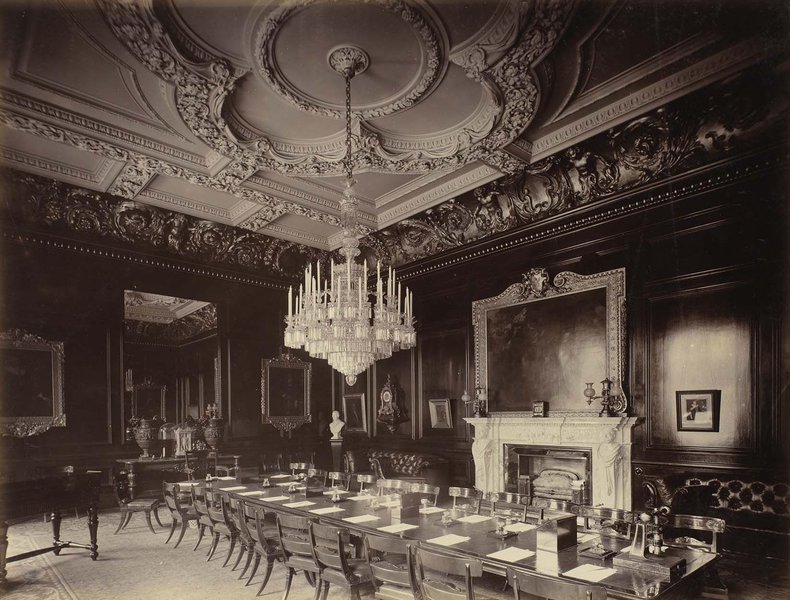 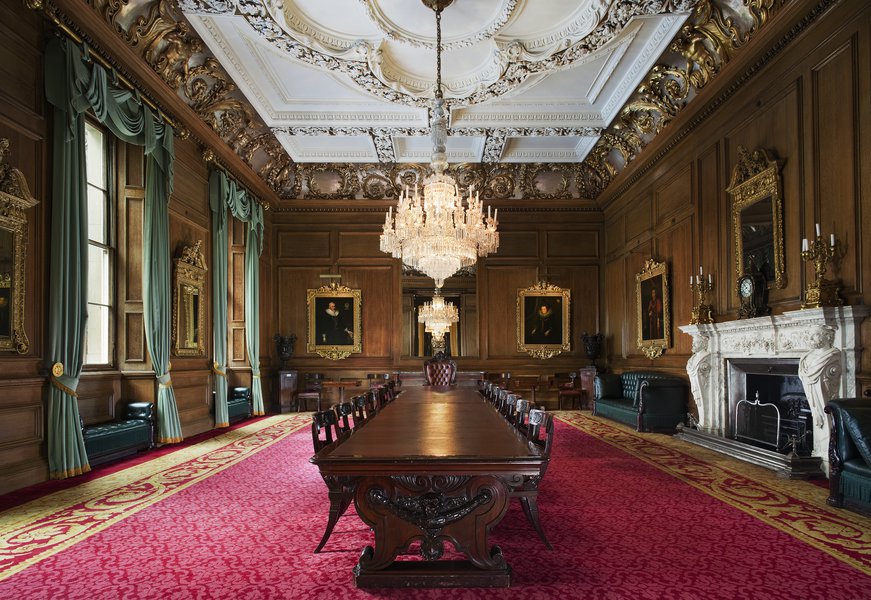 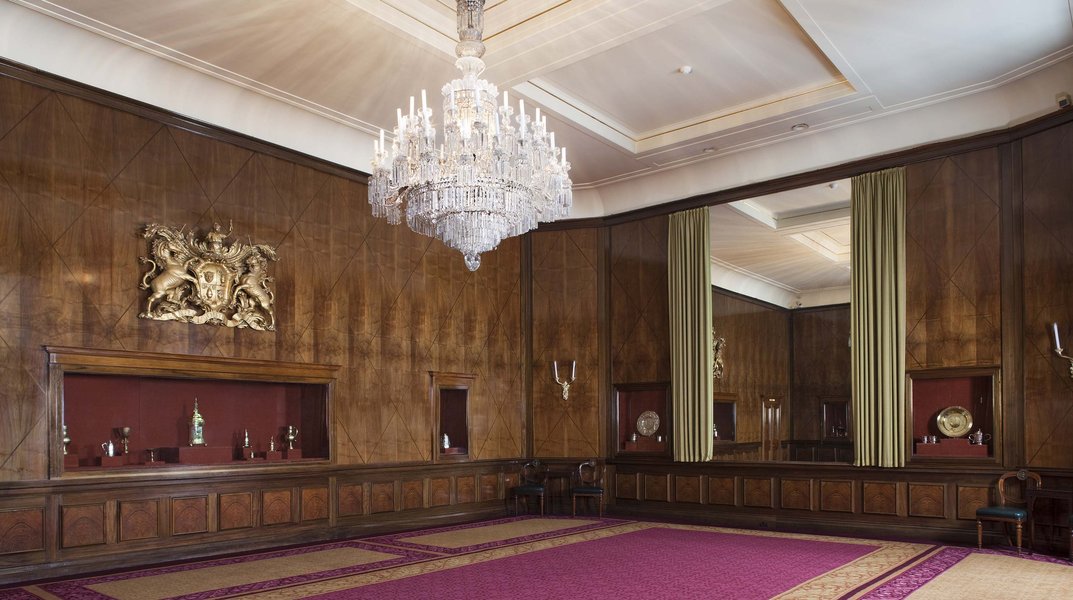 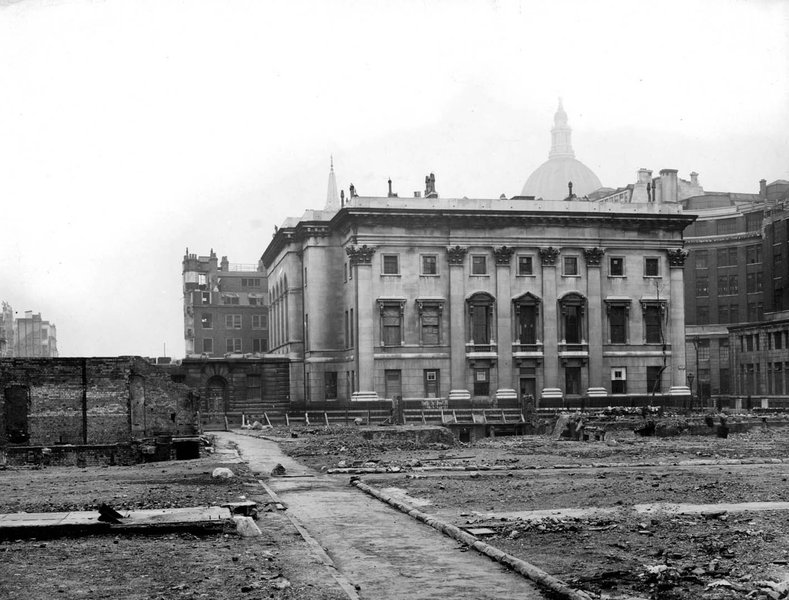 Designed after the Second World War, following bomb damage in this part of the building, this handsome room is panelled in English walnut, with large double doors containing panels of Australian walnut. The beautiful glass chandelier is of the same style as those in the Drawing Room and Court Room. Permanent in-built showcases display a selection of artefacts from the Company's silver collection.

Redesigned in 1950, following war damage, this elegant room is one of the two key reception rooms within the Hall. The most striking feature is the carpet with the Company's coat of arms in the centre, woven in 1902 as an exact replica of the 1835 original. Two magnificent seventeenth-century tapestries hang on either side of the fireplace, depicting stories from Antony and Cleopatra.

The Worshipful Company of Goldsmiths, is one of the Twelve Great Livery Companies of the City of London and received its first royal charter in 1327.

Our members are the lifeblood of the Company, made up of approximately 1550 freemen and 285 liverymen.